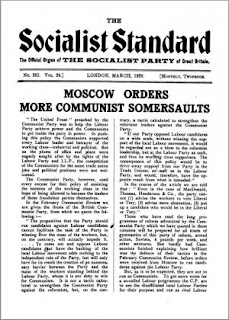 From the March 1928 issue of the Socialist Standard

The Communist Party, however, used every excuse for their policy of assisting the enemies of the working class in the hope of being allowed to become the leaders of these fraudulent parties themselves.

In the February Communist Review we are given the thesis of the British Communist Party, from which we quote the following :—


“The proposition that the Party should run candidates against Labour candidates cannot facilitate the task of the Party in winning ver the mass of the workers, but, on the contrary, will actually impede it.  . . .  To come out and oppose Labour candidates that have the backing of the local Labour movement adds nothing to the independent role of the Party, but will only have for its result the creation of an unnecessary barrier between the Party and the mass of the workers standing behind the Labour Party, whom it is our duty to win for Communism. It is not a tactic calculated to strengthen the Communist Party against the reformists, hut, on the contrary, a tactic calculated to strengthen the reformist leaders against the Communist Party.
“If our Party opposed Labour candidates on a wide scale, without winning the support of the local Labour movement, it would be regarded not as a blow to the reformist leadership, but at the Labour Party as such, and thus its working class supporters. The consequence of this policy would be to drive away support from our Party in the Trade Unions, as well as in the Labour Party, and would, therefore, have the opposite result from what is intended.”

In the course of the article we are told that: “Even in the case of MacDonald, Thomas, Henderson & Co., the party cannot (1) advise the workers to vote Liberal or Tory, (2) advise mere abstention, (3) put up a candidate who would let in the Liberal or Tory.”

Those who have read the long programmes of reform advocated by the Communist Party which we have quoted in these columns will be prepared for all kinds of gymnastics of this party of reform, armed action, Soviets, 4 pounds per week, and other mixtures. But hardly had Communists finished explaining how brilliant was the defence of their tactics in the February Communist Review, before orders were received from Moscow to run candidates against the Labour Party.

But, as is to be expected, they are not to run as Communists. To get more votes for a so-called Labour programme the C.P. are to use the disaffiliated local Labour Parties for their purpose and run as rival Labour candidates. In other districts they can give active support to Labourites who pledge themselves to accept the Communist Party into the Labour Party. They are to put up candidates against the members of the General Council of T.U. Congress, even though in 1926 they demanded all power and all support to this same General Council.

The Workers' Weekly, the alleged organ of the C.P. (24th February), states, in the despatch from Moscow, that as “considerable sections of the masses still follow the reformist leaders, it is absolutely necessary to propose the united front both nationally and locally”—and so we read later that voting for Labour Party candidates in districts where there are C.P.-ers running is only to be decided on after they have tried to run their own or Left Wing candidates.

They are to oppose official Labour candidates—but not always. They are to expose them—but to lend them support with votes because of the united front. The C.P, is to have their own slogans—but to vote for other slogans where their own are absent!

When Communists tell us we can’t educate the workers into Socialism we wonder what the workers will understand after being educated into these contradictory, jesuitical and bewildering tactics in support of a fraudulent Labour Party or a fake Labour programme.

The fact that they still intend to barter support for Labour candidates on condition of being allowed inside the Labour Party proves that their “new” tactics are simply a scheme to compel the Labour leaders to admit them under penalty of losing votes to rival Labour candidates and possibly losing the seat.

This supplies added evidence of the fraud of the Communist Party in claiming to be revolutionary.

The Socialist Party, however, stands for the simple object of Socialism, and its candidates will seek support for Socialism alone.
Adolph Kohn
Posted by Imposs1904 at 9:37 PM