The Influence of Machinery upon the Working Class. (1912) 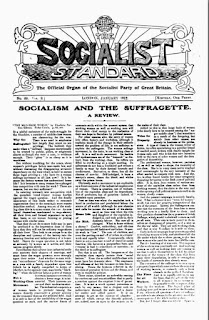 From the January 1912 issue of the Socialist Standard

J. S. Mill, to the surprise of the Radicals. said that it was “questionable if all the mechanical inventions yet made have lightened the day’s toil of any human being. They have enabled a greater population to live the same life of drudgery and imprisonment, and an increased number of manufacturers and others to make fortunes.” We of the Socialist Party have always held that labour saving devices have not lessened the sum total of work that is done by the workers, or increased the remuneration they receive for that work.

This position we defend against “cheery” social reformers who contend that machinery has had a beneficial effect upon working class conditions; that it has brought us nearer to a heaven upon earth.

They assert that machinery has (1) shortened the working day, (2) abolished heavy and wearying work, (3) educated the worker by giving him intricate machinery to mind, (4) lowered the price of commodities, (5) whilst negatively it is contended that it has not made employment more irregular, nor caused any considerable amount of suffering by disturbing working conditions when applied to new industries. All misery attendant on machine production is due to Free Trade, or Protection, or Land Monopoly, or some other Will-o’ the Wisp.

Machinery, says the Liberal, has deepened the working man’s chest and increased his stature by shortening the hours of work. When he says “shortened hours” we promptly ask “compared with when?” And as promptly comes the answer : “In comparison with the hours worked in the ‘hungry forties,’” or “when my grandfather was a lad.”

To compare present hours of work with the length of the working day in that transitional period when capitalism was in its birth throes (with the aim of extolling the difference) is an inane procedure.

Thorold Rogers has shown the comparative leisure of the worker under the system of “small production”—with that we need not deal. If we take our case at its worst and compare hours of work to-day with the hours toiled in the early years of capitalism, we find justification for our case. We find that side by side with the shorter working day has come a quicker pace, a more rapid rate of production, a faster consumption of working-class brain, nerve, and muscle. Whether it be in the sphere of production—at lathe or loom, or in distribution on train, tram, or taxi, the working pace is fierce.

Even if we examine types of work where steam-power cannot be applied—office routine and the like—we find mechanical appliances such as calculating machines, typewriters, dictating appliances, etc., adding to the intensity of the workers’ grind.

The spheres of production and distribution are worked at such a pace that even porters and packers and carmen and shopworkers and the like are affected by the pace which permeates from the departments where machinery reigns as God. The change from the leisurely life of the 17th. century to the horrid bustle of to-day is a change so scenic, so grim, so fraught with great possibilities and fearsome forebodings, that one’s brain whirls at the revolution — and one smiles at fussy politicians and dozy economists. Machine production under private ownership has rendered futile the behest to “love thy neighbour” and ushered in the modern cry: "Get on or get out!"

Economists tell us that machinery is abolishing heavy and “very laborious” work. But whilst machinery has a tendency to make work less “ muscular,” we must not forget that (as J. A. Hobson puts it): “As regards those workers who pass from ordinary manual work to the tending of machinery, there is a good deal of evidence to show that, in the typical machine industries, their new work taxes their physical vigour quite as severely as the old work.” And: “A lighter form of labour spread over an increased period of time, or an increased number of minor muscular exertions substituted for a smaller number of heavier exertions within the same period of time, may, of course, amount to an increased tax upon the vital energy.” (“Evolution of Capitalism,” pp. .'337 et seq.)

We must not overlook, either, the striking number of horrible accidents arising from the tending of machines. Even if those gullible optimists who find in machinery a “ palliative,” an economiser of working class energy—if these people had a defensible case at all it is destroyed by this one factor, the mutilation, mortal and otherwise, traceable to machinery.

If we examine the tables of death rates in various occupations we find evidence of the risk run by the workers. Taking figures for 1900-1-2 (and an index number of 1,000), we find that in the list of occupations “ men of God ” stand well at 524, and farmers at 590. Tramway workers are represented in the holocaust by the number 1,013; copper, tin, etc. workers by 1,043; tool, saw, and file workers 1,315; cotton workers 1,114; brush makers 1216: whilst publicans (terrible example of the pious) are overtopped in the figures by general labourers at 2,235.

General labourers! The phrase calls up reflections of physical and mental misery deeper than of Grecian helot or “the rude forefathers of the hamlet.” 2,235! Pythagoras saw things strange and mystical in numbers; in the death rates and the accident rates of the class of labourers and miners Christian capitalists see things tangible— say a safe twenty per cent.; Socialists see the machine and the man, and curse the capitalism which serenely massacres the real pillars of society.

The machine (so we are told) “educates” the worker by giving him a complex machine to make and tend. If we grant the intricacy and skill involved in machine manufacture (an exercise of skill on the workers' part as great, as the much puffed “labour of superintendence”), it is more than counterbalanced by the tedious times of the machine-tenders, by the “sameness” of the proletarian's work. His home. Ins necessities, and his “luxuries,” all bear evidence of the mechanical, low-priced, and mean. Production in iron, brass, copper, wood, cotton, etc., is simply a story of the exercise of similar actions, the making of prosy repetition articles. To quote J. A. Hobson : “The constant employment on one sixty-fourth part of a shoe offers no encouragement to mental activity, but dulls by its monotony the brains of the employee to such an extent that the power to think and reason is almost lost.”

The workers, as Dickens said, are “those people who all go in and out at the same hours to do the same work; people to whom every day is the same as yesterday and to morrow, and every year the counterpart of the last and the next." The “rude forefathers of the hamlet" were oblivious of the motor car. the Linotype, and the music hall; hut in every village the craftsman in metals, wood, stone, or leather had by his daily work qualities of initiative and forethought cultivated, contrasting with the heavy band laid by machines on their bored minders.

The individual who has heard of the “miseries of grandfather’s days,” challenges us with the assertion that machinery has lowered the price of the necessaries of life. A quotation from Marx’s “Poverty of Philosophy” is apt here: “ The price of food [in civilisation] has almost continually risen, while the price of manufactured articles and luxuries has almost continually fallen. Take the agricultural industry itself: the most indispensable objects, such as wheat, meat etc. increase in price, while cotton, sugar, coffee, etc., fall continually in a surprising fashion. Even among food stuffs, properly so-called, luxuries, such as artichokes, asparagus, etc., are relatively cheaper to-day than the objects of prime necessity. In our epoch the superfluity is more easily produced than the necessaries of life. Finally, at different historical epochs, the reciprocal relations of price are not only different but opposed. All through the Middle Ages agricultural products were relatively cheaper than manufactured products : in modern times the relations are reversed.”

So Liberal-Nonconformists expect the worker to be ridiculously thankful at the cheapness of questionable boots, frail sovereign suits, and dollar watches, while the rent of his “ home,” the price of his beer, his food stuffs, his fuel, etc., was never so prohibitive as in the “palmy” present. On every point the machine defender is worsted. 'The worker is, indeed, badly housed, badly clothed, and badly fed.

The defenders of capitalism deny our assertion that machinery has made unemployment more acute. 'They admit that a new machine might cause a temporary displacement of labour, but contend that the decrease in price resulting from the use of machinery causes a new demand which absorbs the displaced labour. Things “adjust” themselves and all is for the best. But whilst the “adjusting” process is fructifying, the worker is being pushed further into the mire. The adjusting period may be only temporary, but human lives are likewise temporary. A knotting machine dispenses with five or six “twisters”; the later try to adjust themselves. Twisting is one of the numerous processes in cotton manufacture, and obviously the number of twisters is determined by the whole industry.

The production of cotton goods must increase six times if all the twisters are to find employment at their own occupation. Machinery thus makes the workers’ jobs more hazardous and temporary. It throws out six twisters and finds employment for one mechanic making the new machine. The mechanic in turn is displaced by a lad working a new machine which “economises labour” in the engineering shops. Commonplace statistics have shown the existence of unemployed in every “skilled’’ trade.

In conclusion. Socialists do not see a “devil” in machinery. They appreciate its value to a society wherein are neither peers nor paupers, moochers nor millionaires. Socialists object to the capitalism which uses machinery as a means of more rapid and efficient exploitation of the workers; object to the degradation resulting from the existence of a factor which, under Socialism, will add leisure and pleasure to life.
John A. Dawson
Posted by Imposs1904 at 9:41 AM