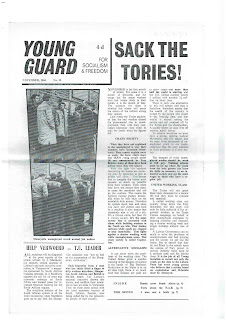 From the November 1963 issue of the Young Guard

The purpose of this article is to show readers why the Socialist Party of Gt. Britain considers ‘Young Guard’ as just another well meaning but misguided group who aim, whether they realise it or not, to make the running of capitalism more efficient, or supporting various reforms which they misname socialism.

In contrast the SPGB holds that the present social system, capitalism, is the cause of working class poverty and will only be abolished when the majority of the international working class understands and wants socialism.

First must be explained what we mean by the two terms.

Capitalism is a system of buying and selling, where wealth is produced for sale on the market with the idea of producing a profit for those who own and control the means of production and distribution. Socialism on the other hand, is a system where wealth is produced for use, with the means of production and distribution being commonly owned and democratically controlled by the whole society.

Anything short of this—no matter how desirable it may seem—is not Socialism. For instance there will be no money in the socialist society, therefore no need of banks and insurance companies; no armed forces, for in society there will exist for the first time a harmony of interests: where the watchword will be— from each according to his ability, to each according to his need.

We say that all reformists— whether so-called leftists or rightists—who tell the workers that their administration of capitalism is Socialism are directly retarding workers realising that Socialism is their interests. Thanks to the antics of Labour Parties the world over. Socialism is now equated with shortages, controls, high rates and taxes, nationalisation and so on.

Young Socialists and Young Guard in particular are perpetuating these myths by supporting the party which, during its last term of office, initiated the production of nuclear weapons in Britain, used troops to break strikes, imposed a wage freeze on trade unionists (and intends to do so again with your help no doubt) became the first party to impose conscription in peace time and started the germ warfare establishment at Porton although your contributor ‘Fianna!, seems to think this was a devilish Tory creation (see Y. G. Aug.).

No doubt Young Guardites hold the absurd view that they can help convert the Labour Party to Socialism, though they might just as well try doing this with the Catholic Church, but even if this were possible who are they to play the educators?

Take a look at the ‘aims’ of YG (which can be changed anytime!) to see what we mean. For example, nationalisation has nothing to do with Socialism and we challenge YG or anyone else to give just one example of nationalisation having benefited workers anywhere.

Again worker’s control is a meaningless term as the abolition of capitalism means the abolition of all classes, so where do these workers come in? Workers control is merely another method of running capitalism which even Mr. Khrushchev is now looking upon with favour. Indeed Mark Frankland, writing in the Observer (Sept. 1st) hit the nail on the head when he pointed out that Mr K’s recent speech to Yugoslav workers, on which he extolled the virtues of workers control, was a waste of breath as they—“Know quite well that their wages depend on profits from their factories.”

We also know that Young Guardites envisage profits under Socialism. Where will these come from? Will workers extract surplus-value from themselves?

To sum up; Young Guardites have as much idea of Socialism as any other reformist group. What they call ‘Socialism’ is merely a Utopian rag-bag of ideas none of which, if implemented, would fundamentally alter the wage slavery of the working class. The interests of that class lie in the abolition of capitalism and this, we repeat, they will do when and only when they understand and want Socialism.

“Fair enough” you may say, ‘But how will they get this understanding?” Our reply is that they certainly will not get it by being told that Labour administration of capitalism is Socialism. This simply draws the antagonism of the workers for the failures of that Party onto Socialism and produces a working class which, by its many disappointments at the hands of Labour, is disillusioned and more confused than ever as to what Socialism is, let alone how to achieve it.

The only way is for Socialists to preach Socialism and nothing else, at all times. The more the workers hear expounded a revolutionary alternative to the present set up, the quicker will they demonstrate that they are just as capable of latching-on as anyone else.
Vic Vanni
Ex-Secretary of Woodside Constituency Labour Party

Woodside was a parliamentary constituency in Glasgow, Scotland, and the constituency Labour Party in Woodside was known as a left-wing stronghold in the 50s and 60s. Tony Cliff's International Socialists' - forerunners of the British SWP - gained a foothold in Woodside Labour Party Young Socialists (the late Paul Foot was recruited to the IS tradition in Glasgow at this time), and Young Guard newspaper at the time this article was published was a joint initiative by the IS and the RSL - forerunners of the Militant Tendency - who were both practising 'entryism' into the Labour Party.