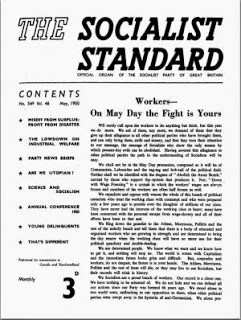 From the May 1950 issue of the Socialist Standard

We rarely call upon the workers to do anything but think, but this year we do more. We ask of them, nay more, we demand of them that they give up their allegiance to all other political parties who have brought them, and can only bring them, strife and misery, and that they turn their attention to our message, the message of Socialists who show the only means by which present-day evils can be abolished. Having severed this allegiance to other political parties the path to the understanding of Socialism will be easy.

We shall not be in the May Day procession, composed as it will be of Communists, Labourites and the rag-tag and bob-tail of the political field. Neither shall we be identified with the slogans of “Abolish the Atom Bomb,” carried by those who support the system that produces it. Nor, “Down with Wage Freezing” in a system in which the workers’ wages are always frozen and numbers of the workers are often half frozen as well.

We repudiate and oppose with venom the whole of this bunch of political careerists who treat the working class with contempt and who were prepared only a few years ago to preside over the slaughter of millions of our class. They have never had the interests of the working class at heart; many have been concerned with the personal escape from wage-slavery and all of their efforts have been to that end.

We fling down the gauntlet to the Attlees, Morrisons, Pollitts and the rest of the unholy bunch and tell them that there is a body of educated and organised workers who are growing in strength and are determined to bring the day nearer when the working class will have no more use for their political quackery and double-dealing.

We are determined people. We know what we want and we know how to get it, and nothing will stop us. The world is rotten with Capitalism and the immediate future looks grim and difficult. But, comrades and workers, do not despair, the future is in your hands. The Attlees, Morrisons, Pollitts and the rest of them will die, or they may live to see Socialism, but their records will stink in history.

We Socialists are a proud bunch of workers. Our record is a clean one. We have nothing to be ashamed of. We do not hide and we can defend all our actions since our Party was formed 46 years ago. We stood alone in two world wars, unflinching in our opposition to them, when other political parties were swept away in the hysteria of anti-Germanism. We alone proclaimed the world-wide solidarity of the working class and extended hands in fraternal greetings to workers in all parts of the world whatever language they might speak and to whatever country they might belong.

We are now approaching the third world war. Again we shall oppose it. We know that our interests are those of the workers all over the world, the abolition of Capitalism and the establishment of Socialism. In that mission we will willingly and gladly co-operate with them. May the day come soon.

We have a message for May Day and let it be spoken abroad. It is, "Down with Capitalism” and “The world for the Workers." Let some of the spirit that animated the first May Days be recaptured. It was then a spirit of struggle, not the abject lick-spittling of the modern May Day.

Our message is spreading wider; the day of the social revolution is getting closer. Friends, we are doing our share. When are you going to do yours?
Clifford Groves.