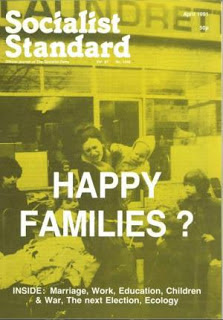 The world ecological crisis is on such a scale that many workers believe environmentalism has superceded the need for class struggle. “A genuine redistribution of power", says Jonathan Porritt, “can no longer be simplistically interpreted in terms of setting class against class . . .  the need to serve the general interest of humanity now transcends any such old-world divisiveness" (Seeing Green). Given the seriousness of the crisis it is hardly surprising that such a view has a widespread appeal in the Green movement. Nevertheless it is a naive analysis which socialists totally reject. Why?

The most common argument used to hack up the claim that human beings have overstretched the Earth’s ability to sustain us is that there are simply too many people. David Icke’s view is typical. ”Humankind has a choice to make. We can be sensible and limit our numbers voluntarily or we can go on until nature does it for us with disease and hunger and the time isn't too far off’ (It Doesn't Have To Be Like This).

There is nothing new in this. Parson Malthus was spouting his own brand of naturalistic determinism nearly two hundred years ago. In his Essay on the Principle of Population Malthus argued that food production increases over fixed periods in proportion to the arithmetic series 1. 2. 3. 4. 5, . . . while population increases over fixed periods by the geometric scries 1, 2. 4. 8. 16 . . .

Fortunately for us. Malthus’s apocalyptic vision had not an iota of scientific validity. His theory, like those of his modern-day followers, is completely arbitrary. The facts refute it. Since Malthus’s time food production has grown considerably faster than population and there is more than enough to go round. The figures bear this out. The surplus world grain stockpile in 1988 was 360 million tonnes—36 greater than the estimated 10 million tonne grain shortfall for all of sub-Saharan Africa in the 1987-88 crop year. To feed the 15 million children who starve each year would require just 3.6 million tonnes of grain, a mere 1 percent of the world’s stockpile (Susan George, Ill Fares the Land).

Benefits of technology
A close second to population growth in the Greens' litany of fear is industrialisation. “The Industrial Revolution”, says Icke. “was a change in human activity unprecedented in history and it has brought about an equally unprecedented threat to life on Earth”. There is no doubt that the development of the factory system has blighted the lives of millions. In The Condition of the Working Class in England, Engels chronicled the living hell of workers in the mid-nineteenth century industrial towns. And today the smog masks worn in Tokyo and Mexico City are symbols of the stinking and poisonous reality that is modern industry.

But there is another side of the story. Industry has brought many of the things that we now take for granted in the home: electric light and cooking and warmth, telephones, washing machines, fridges and vacuum cleaners. Modern transport and telecommunications have widened the experiences of millions, rescuing men and women from "the idiocy of rural life". New printing processes, radio and television make accessible books, music and art that were once the privilege of a few.

All these things and more are the products of "industrialism” and are not to be despised for it. The crux of the matter is this. Just as no-one should have to go hungry today when we have the ability to produce more than enough food, so has capitalism by developing industry and technology brought us to the point where we have the potential to solve the age-old needs for warmth and shelter.

Yet the Greens oppose large-scale industry and argue instead for the dismantling of the world economy, replacing it with small, localised, self-sufficient output. In naive disregard for the economic necessities of capitalism, Icke wants to see “a change to smaller companies and an end to the present trend of a few giants swallowing up the rest and controlling local markets". He fails to see that the concentration of production under capitalism is not an optional extra; it is part of the very dynamic of the system. As Marx pointed out that:

The battle of competition is fought by the cheapening of commodities. The cheapness of commodities . . . depends on the productivity of labour, and this depends upon the scale of production. Therefore the larger capitals beat the smaller. (Capital, Vol I. Chapter 25. section 2).

From their “forest clearing" called Europe, many Greens would deny the benefits of technology to others. Their smug Eurocentric argument is that Third world countries “must find ways of gradually delinking their economics from those of the developed world” (Jonathan Porritt). In reality the current level of world production depends on there being a world division of labour. It is this ever-increasing socialisation of labour that makes the world socialisation of ownership— socialism—an ever more realisable goal. It is only with this social ownership and control of the means of production that we can start talking about employing materials and methods of production that are ecologically acceptable. Until then, production will be governed by blind economic laws which impose their own priorities.

But the Greens oppose socialism with their utopian dreams of de-industrialization under capitalism. They want to cut down the size of the means of production while leaving the relations of production intact.

Mysticism versus Marxism
By considering ecological problems in isolation from the basic contradictions of capitalism, the Greens fall inevitably into the trap of presenting them as above classes and independent of the society we live in. Humanity itself gets the blame, not the social system. Relief is sought in anthropological solutions: the need to change people, their beliefs, morals, education and the like. Theodore Roszak expresses this view in his book Person/Planet The Creative Disintegration of Industrial Society, saying that “a militant class-consciousness would politicise the personality out of existence". He adds later that “a new human identity requires a politics that has outgrown the modern infatuation with science and industrial necessity”. He does not explain what he means and refers only to the need for a “spiritual dimension of life".

This concern with an inner world of personality marks a failure to understand the indissoluble links between the individual and society, and the fact that only social revolution is the key to real individual freedom through liberation from economic coercion.

Roszak's “adventure of self-discovery through to its planet-saving purposes" may have a romantic appeal to the Greens. But as Marx pointed out:

It is ridiculous to long for a return to that original fullness as it is to believe that the present complete emptiness must be permanent. The bourgeois view has never been more than the opposite of that Romantic view, and so the romantic view will accompany it as a justified opposite till its blessed end. (Grundrisse, Notebook 1).

We do not have to kneel down before nature like the sun-worshippers of old or the Gaia mystics of today. Action can and must be taken to save the planet. The requirements are familiar enough and embrace, amongst others, the following: use of renewable energy sources and the conservation of non-renewable ones, agricultural practices that preserve the fertility of the soil, emission controls combined with tree-planting to take up the carbon gases, use of non-polluting technology to transform materials, and the manufacture of solid goods without built-in obsolescence. Sufficient technical knowledge and scientific understanding of the laws of nature exist now to make these things, and more, a real possibility. What we lack is the social framework which would allow them to be carried out.

The Greens fail to understand that it is the economic necessities of capitalism that make it impossible to establish a sustainable relationship between human society and the rest of nature.

Theirs is essentially a static and superficial vision of the universe. They see no further than the surface appearance of things. Famine to the Greens means simply too many people. Pollution comes from industrial processes so they conclude that industrialism is the enemy. They fail to locate the real problem in the blind economic laws of a social system that is driving us on to the edge of irreversible ecological disaster. No wonder all they have to offer is a futile programme of reforms.

The socialist vision is not static. Engels’s observation that “motion is the mode of existence of all matter” is a major tenet of the Marxist guide to action. Human activity has always changed the environment and will continue to do so. There is no going back to some pre-industrial golden- age.

Looming ecological catastrophe makes more urgent the necessity of socialism. Workers have no choice but to expropriate the capitalist class and plan production for need not profit. Only then can we start to organise production in an ecologically acceptable way. Only then will we manage nature and control changes in our relationships to it through an understanding of its laws and the unfettered ability to apply them.
John Dunn
Posted by Imposs1904 at 3:48 PM