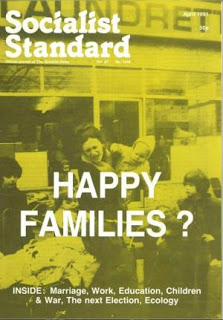 A terrible pall of acrid smoke hangs over the city. Noise! Nowhere to shelter from the noise; the noise of the explosions in the air, the noise of the 2000 kilogramme missiles. The voice of the reporter had said they were so accurately aimed that they could hit a garage door. There would be few garage doors left—and few people alive within a quarter mile of each exploding door.

Noise! Buildings crumbling, crushing human bodies; men, women and children. The small sounds of screams and sobbing—the noises we humans make in terror—blotted out by the exploding anti-aircraft shells and the screech of the multi-billion dollar technology that has been scrupulously devised to destroy lives and property. Mothers' boys, trained with the precision of surgeons, fly these things and will be called heroes—but not by their victims.

Fire, adding its terrible consuming roar to the awful cacophony of terror, laps at homes, at the unpaid-for paraphernalia of living that brings joy and sorrow even to these we are told are our enemies—our enemies deserving of this. Here is hell! Hell where human flesh adds its stench to the untreated sewage that the fantastic flying technology spreads on the streets. Hell, where people who look like us, feel like us, weep like us and die like us, are marginal counters in this orgy of absolute desolation that is happening because people in power have clashed over interests that have no bearing on the lives of those who are dying—or, even, on the lives of those who are killing them.

Who is visiting this terror on these people? Who is responsible for the war—murder of all these innocent men, women and children? Well . . . actually . . . all this, we are told, is the work of the world’s peace-keeping body, the United Nations Organisation!

Throughout the world we watch. Television has created a grand amphitheatre in which this drama of destruction can be played out before an audience that must be even greater, surely, than that which watched last year’s World Cup. My daughter’s child says "turn if off, Grandad”. As I flick the remote control she says, with precocious discernment, "I wouldn't love my daddy if he was killing people!” Channel Three is telling us that the clergy are organising prayers for those involved in the killing. Over to Channel One where the local news tells us that some IRA idiot had put a parcel bomb on a bridge and had been roundly condemned by both the clergy and a government Minister.

How do you tell a child?
The child is too wise to be given excuses. How do you tell a child that in the world where, hopefully, she will become an adult there are things called fighting forces which exist to kill people and destroy property. In every country, as surely as there is a piece of coloured cloth to represent the way the people are supposed to be different, there are fighting forces—men and women trained to kill and destroy. The very young could not understand that: only after we have been "educated", trained and conditioned in the values of capitalism and its divisive nationalism, does the notion that it is reasonable to train to kill one another become acceptable.

But this fighting force transcends those of a nation; this, we are told, is the greatest force ever assembled. Its weaponry is staggering and, had its cost been applied to the things that human beings really need, every country in the world would have first-rate hospitals and no one would be denied, or have to wait for, treatment; in addition, the housing problems of all the nation-states that make up this force, could have been solved, their infrastructural problems removed and the 15 million children who die worldwide every year, because their parents cannot afford to buy them nourishment, need not have died.

Truly, what it has cost to create this greatest of fighting forces is staggering beyond the imagination, and its capacity for killing and maiming human beings and its power to destroy wealth is so great that it beggars the sick minds of its creators.

What was it all about? Was it about the fact that millions of people in our world are dying from lack of food? That even more millions have their lives made utterly miserable by poverty? No, no! of course not! Wouldn’t it be silly to cause such upset over trivialities like the suffering of ordinary mortals?

Unnecessary poverty may afflict the greater part of the world’s population; millions may die of hunger and more millions may be homeless. Millions of children may go blind every year because the few pence needed for the treatment of each is not available and because those who own the world’s wealth are under an inexorable compulsion to use it for further capital accumulation. But these are not the sort of things that moves the United Nations or causes world mobilisation.

Rambo image
The UN was stirred by the fact that a tyrannical regime in Iraq, a state created by the oldest of the imperial powers, Britain and France, and nurtured politically and militarily by all the so-called “Great Powers", had over-run another tyrannical slate, similarly created on its borders. George Bush, the Texan oilman, whose oil interests temporarily reside with his son while he acts for his class as President of the USA, along with Baker, his colleague in politics and business, were both outraged. Economically, America was alarmed by the threat to their Middle East oil supplies and, politically, there were those in the Bush administration, including Bush himself, who saw the opportunity of beating the Iraqi dictator as a means of restoring the Rambo image which is the cultural fare in much of the United States and which had been shattered by the killing proficiency and endurance of the ill-equipped Viet Cong in Vietnam.

Since state capitalism in eastern Europe broke down under the weight of an inefficient, parasitical bureaucracy and a monumentally expensive military machine, those innocents who think wars are caused by conflicts between good and evil were hopeful that a new era of peace was dawning. Ironically, it was the threat of peace, or more specifically the lack of a threat from the Soviet Union, that allowed Bush and his war-mongering cohorts to railroad the UN into taking a stand against the Iraqi ruling class. Had the Cold War still been in operation Bush might have blustered but there would have been no Operation Desert Storm. Equally, had the US not marshalled support for action against Iraq, no other nation would, or could, have initiated the slaughter which has just ended in the Gulf.

Hi—jacked
Effectively, America, followed obediently by Britain, hi-jacked the United Nations. Like pouring petrol on a fire, they enhanced the prospects for the next round of Middle East conflict by using massive bribes of sophisticated military weaponry to Arab states, such as the dictator Assad’s Syria and Egypt, and, of course, the ruthlessly belligerent Zionist state of Israel. With Russia neutralized and the countries of western Europe anxious not to accentuate differences on the run-up to negotiations for greater Common Market political unity, the UN Security Council was in the political pocket of the US.

Wise and sincere people have put great store by the UN. Unfortunately for their theories, it was taken hostage by bribery and corruption and had its proclaimed role of a peace-keeping body reversed into that of one of the most ruthless destructive machines the world has ever known.

After more than a month of bombing and killing, the lying thug Saddam Hussein indicated that he was prepared to accept a Russian peace proposal that urged him to comply with the principal UN Resolution demanding the withdrawal of Iraqi troops from Kuwait. Bush broke off entertaining his rich friends at his week-end retreat to give a demonstration of viciousness on television: as self-appointed commander of the UN forces, he decreed that there would be no let-up. and his military commanders responded by a frenetic upgrading of bombing raids on Baghdad and Basra.

Within forty-eight hours even the ruthless Saddam Hussein was forced to admit defeat. Up to this time the number of Iraqi casualties was unknown: what is known is that as the Iraqis retreated in disorder out of Kuwait and across southern Iraq, throwing away their arms and seizing any form of transport they could get their hands on. The American commanders of the world's "peace-keeping" force released the most brutal and unnecessary attacks that accounted for the slaughter of thousands of fleeing Iraqis.

The cost
The cost of the slaughter, seen predictably in financial accounting terms, is provisionally put at up to $100 billion plus a roughly equivalent amount for the destruction in Kuwait and unknown billions for the massive destruction of the industrial and commercial infrastructure of Iraq. Additionally, there is the $20 billion's worth of arms that it is admitted America, Saudi Arabia and Kuwait used to bribe Middle Eastern Arab states into supporting their cause in the UN and in the killing itself.

In defeating Iraq the Anglo-American military caucus lost some 50 personnel from all causes, mostly accidents. Current estimates of Iraqi casualties are provisionally estimated at between 75,000 and 85,000. Peace-keeping, it seems, is not economical with human lives.

Such fantastic wealth; such vile slaughter of human beings; such utterly appalling destruction! Such a compelling argument in favour of abolishing an obscene social organisation that, in the words of one of its most disgusting upholders, George Bush, "requires each generation to pay a price for freedom”.
Richard Montague

The bolded paragraphs are in the original article . . . so I kept them.