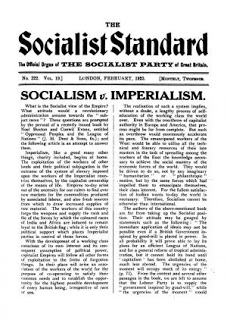 From the February 1923 issue of the Socialist Standard

What is the Socialist view of the Empire? What attitude would a revolutionary administration assume towards the "subject races"? These questions are prompted by the perusal of a recently issued book by Noel Buxton and Conwil Evans, entitled “Oppressed Peoples and the League of Nations” (J. M. Dent & Sons, 6s.); and the following article is an attempt to answer them.

Imperialism, like a good many other things, charity included, begins at home. The exploitation of the workers of other lands and their political subjugation is the outcome of the system of slavery imposed upon the workers of the Imperialist countries themselves, by the capitalist ownership of the means of life. Empires to-day arise out of the necessity for our rulers to find ever new markets for the commodities produced by associated labour, and also fresh sources from which to draw increased supplies of raw material. The workers of this country forge the weapons and supply the rank and file of the forces by which the coloured races of India and Africa are induced to remain loyal to the British flag; while it is only their political support which places Imperialist parties in control of those forces.

With the development of a working class conscious of its own interest and its consequent assumption of political power, capitalist Empires will follow all other forms of exploitation to the limbo of forgotten things. In their place will arise an association of the workers of the world for the purpose of co-operating to satisfy their common needs and to establish the opportunity for the highest possible development of every human being, irrespective of race or sex.

The realisation of such a system implies, without a doubt, a lengthy process of self-education of the working class the world over. Even with the overthrow of capitalist authority in Europe and America, that process might be far from complete. But such an overthrow would enormously accelerate its pace. The emancipated workers of the West would be able to utilise all the technical and literary resources of their late masters in the task of spreading among the workers of the East the knowledge necessary to achieve the social mastery of the economic forces of the world. They would be driven to do so, not by any imaginary "humanitarian” or "philanthropic” motive, but by the same forces which had impelled them to emancipate themselves, their class interest. For the fullest satisfaction of human wants to-day the world is necessary. Therefore, Socialism cannot be otherwise than international.

The authors of the above-mentioned book are far from taking up the Socialist position. Their attitude may be gauged by statements such as the following: “The immediate application of ideals may not be possible even if a British Government inspired by good-will is placed in power. In all probability it will prove able to lay its plans for an efficient League of Nations, and for a general reform of tropical administration, but it cannot hold its hand until ‘capitalism’ has been abolished at home, much less abroad. The urgencies of the moment will occupy much of its energy” (p. 71). From the context and several other passages in the book, we are left to assume that the Labour Party is to supply the “government inspired by good-will,” while “ the urgencies of the moment ” would appear to consist chiefly of the “emancipation” of the Armenian peasants from the control of the Turks, and of the Koreans from that of the Japanese !

Details concerning the atrocities committed by these two Imperial powers occupy quite a considerable portion of the book, yet one looks in vain for any similarly frank attitude towards the methods adopted by British, American, and the late Russian administrations. Such incidents as that at Amritsar are very briefly referred to, while British policy in Mesopotamia, Palestine, Egypt, and India generally is whitewashed on the ground of the economic backwardness of the natives’ social order.

The nationalist movements in these various countries are criticised for their alleged extravagance of demands, yet the economic explanation of these movements is left as vague as that of Imperialism. Nowhere do the authors clearly put forward the simple fact that capitalist interests dominate in the political sphere. According to them, it is the “needs of the world” which impose limitations upon the “national right of independence,” while the nation in turn is regarded as a uniform entity, though they admit that the very “conception of nationality” eludes definition (p. 11). The class division in society is ignored.

As a remedy and preventive for the “too obvious evils of Imperialism” on the one hand, and the inconvenient “extremism” of Oriental Nationalists on the other hand, the authors advance the Mandation system of the League of Nations, with such reforms as would give greater direct power to the Council of the League. What appears to be lost sight of is the fact that no capitalist power can be obliged to “accept a mandate.” It will naturally do so only when its interests dictate such a step, and the methods of its administration will conform to those interests according to the conditions obtaining in the mandated territory. A case in point is Tanganyika Territory (late German East Africa), where the system remains practically unchanged except for the fact that British, instead of German, capital reaps its advantages.

The fullest development of the League of Nations, in accordance with the authors’ ideas, could only amount to the collective (and possibly more efficient) exploitation of the coloured workers by the larger capitalist groups. Inasmuch as competition would be restricted, the political power of these groups would be strengthened as against the rising bourgeoisie of the East, with a consequent throttling, to a further extent, of the ever-expanding forces of production. From this policy the workers of Europe and America have nothing to gain and everything to lose. The elimination of-competition among their capitalist masters means increased competition among the workers themselves. Their interests demand co-operation with the object of satisfying social needs rather than the production of luxury in idleness for a few.

If the Labour Party stands for the more efficient organisation of capitalist exploitation, nationally and internationally, that is one more argument in favour of our ceaseless opposition to that body. The above book simply provides additional evidence that this is the case. It is a good illustration of the extent to which “Liberal” capitalist principles are in the ascendant in the intellectual outlook of the up-to-date “Labour Leaders.” From first to last, working class interests are away in the background, effectually obscured by the shibboleths of Gladstonian “democracy.” In the view of the authors, it is the diplomats and not the workers who are the agents of “progress" (pp. 72,73).

To the Socialist the practical problem pressing for solution is not national or racial, but economic and social, cutting across all ethnical and geographical distinctions. The class struggle over the possession of the means of production and the products of labour is to us the supreme issue.

In opposition to all this distracting talk about this, that, or the other local “question,” what better answer can be given than that contained in the manifesto issued by the Socialist Party of this country on the outbreak of the Great War, in the September issue of this paper :—

“Having no quarrel with the working class of any country, we extend to our fellow-workers of all lands the expression of our good-will and Socialist fraternity, and pledge ourselves to work for the overthrow of capitalist and the triumph of Socialism.”