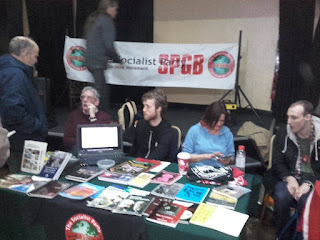 Party News from the January 2020 issue of the Socialist Standard

On Saturday 23 November the first ever Marxist Book Fair was held in Liverpool, with various denizens of what the press likes to call the ‘ultra-left’ in attendance, by invite only. The venue was a largish back room in a fairly up-scale pub close to the University, and members of our Lancaster and Manchester branches turned up in the morning to crew a stall for the day. We were rather lucky to be given a large table in a good position in front of the band stage, which meant we were able to mount an SPGB banner on two speaker stands on the stage behind us. This formed an impressive backdrop to our display of literature, t-shirts, badges, and a laptop running the Party whiteboard video on permanent loop. Pretty groovy, we thought, except that the banner rather dominated the room while other stall displays were somewhat more modest, contrary to our expectations. What we also didn’t realise was that when the scheduled talks began, people would be using the stage area, so every speaker had to deliver their talk in front of our SPGB banner. Oops, our bad. It looked uncomfortably like something the SWP would do. They are notorious for trying to hijack events, which may have been why they hadn’t been invited.

There was a curiously eclectic mix of groups there, including the Merseyside Socialist Theory Study Group, Socialist Appeal, the CPGB, Liverpool’s ‘News from Nowhere’ radical bookshop, the CWO, and ex-Militant (nowadays calling themselves Socialist Party of England and Wales – SPEW – with a kind of self-hating disregard for the power of acronyms). We had a nice long chat with the people on the IWW stall next to us. We couldn’t really figure out the logic by which some groups were invited or not invited, but anyway it was a pleasant day and everyone was very civil and polite, which makes a nice change considering how left groups have been known to treat each other in the past.

The talks said much about the politics of the groups involved. Instead of giving a lecture we chose a bit of audience participation, and we were grilled on our parliamentary politics (left communists, like anarchists, tend to be very against using parliament as part of the revolutionary process, while the IWW – aka Wobblies – are syndicalists who are also sceptical). Quite why this is such a big issue for left groups is a bit of a mystery to us. Our Material World column this month (page 9), writing on Hong Kong, makes a very good point about whether or not people in revolutionary situations would use the ballot box – just you try and stop them!

Some of the other speakers talked in impassioned tones about the urgent need to ‘get the Tories out’. We’ve been hearing this same rallying cry for decades and it’s amazing that such groups have got the energy to keep banging that drum. Leaving aside the politics of favouring one capitalist party over another, there’s something hugely dispiriting about such calls. It’s bad enough when you can’t get workers to consider the idea of taking the whole world into common ownership, without governments, frontiers, the rich, money, banks or bosses. But at least that’s an ambitious goal. How much worse must it be when you can’t get recruits for your group when the only thing you are asking them to agree with is ‘get the Tories out?’

One or two other speakers talked about the need for socialist ‘leadership’, which made us feel slightly uncomfortable and reminded us we were in the presence of a lot of Leninists. The thing about people on the left who believe in this is that they’re not necessarily in love with the idea of having bosses and having to take orders, it’s just that they can’t imagine a group getting anywhere without leadership. The fact that we have no leaders and are also the second oldest political party in Britain may prove that it is possible to have a sustainable and long-lived leaderless group, but that’s not the point as far as they’re concerned. What is the point is that we haven’t achieved our aim of world socialist revolution, so in their minds this proves that leaderless groups don’t get anywhere. But in a classic case of confirmation bias, they tend to overlook the fact that they haven’t got anywhere either! As we pointed out in our contribution to the gathering, we’re all in the same back room of an obscure Liverpool boozer, not hosting rallies in football stadiums.

The only group which chose not to give a talk was SPEW. In fact they didn’t look like they enjoyed being there at all. They didn’t seem to talk to anyone at other stalls, pointedly carried on conversations between themselves when other people were giving talks, and then packed up abruptly and noisily in the middle of one of the talks. We wondered if they’d been getting bad hex vibes from the other stallholders. We tend to forget that, while we’re not keen on Leninist ideas in general and we do have an enshrined commitment in our Declaration of Principles to be ‘hostile to all other parties’, in practice we’re fairly easy-going and tolerant compared to Leninist groups themselves, who frequently hate each other with a vengeance.

There were a fair number of visitors, and quite a good crowd for the talks, considering that advertising for the event had probably been modest (there was no poster on the railings outside the pub, which seemed like an unfortunate oversight, or it may have been a pub prohibition). We sold a bit of stuff and made a few contacts. The general idea is to hold this Book Fair every November, and we’ll be happy to go along again if asked. It’ll be interesting to see how this plays out over the next few years, and whether groups who are historically so divided over their revolutionary approaches will remain enthusiastic about the idea of sharing an annual space, especially if the SWP get involved. Dislike of the SWP is probably the only thing all left groups have in common.

How to keep the event sustainable in the long term is a particularly relevant question given what’s happened lately to the long-established London Anarchist Book Fair, which seems to have (perhaps temporarily) died a death. This event managed quite successfully for the most part and over many years to accommodate a variety of perspectives within the general anarchist movement. But then a catastrophic Trans-Terf confrontation in 2017 caused it to go into melt-down. The organisers, facing a barrage of unjust criticism and abuse (being called ‘fascists’, etc), understandably lost the will to organise a further event so there hasn’t been one since, although some regional bookfairs have gone ahead. Let’s hope the organisers of the Marxist event don’t end up in a similar situation. As the saying goes, no good deed goes unpunished . . .
Paddy Shannon
Posted by Imposs1904 at 3:38 AM

The fact that you call the Casa set up by the sacked Liverpool Dockers " an upscale pub" shows how out of touch your pathetic debating society is.

The comment/reply below is cut and pasted from the Left Trainspotters group on Facebook. (Mike raised a similar point over there.)

"Cut him some slack. He was visiting the big city from Lancaster. I bet he was starry eyed at visiting a city with not one, but two professional football teams ;-)

Anyway, maybe he doesn't 'buy into' the whole Labour Movement Memorabilia schtick. I remember I wasn't the couple of times I popped into the Bread and Roses pub in Clapham all those years ago. The nearest I've been to ever being in a wine bar. Lots of moody black and white photos of strikes on the walls, union hacks in expensive gear and overpriced 'craft' beer. The Manor Arms down the road from the Bread and Roses was far more down to earth and working class. Decent lock ins, as well."

See how I kept it civil?