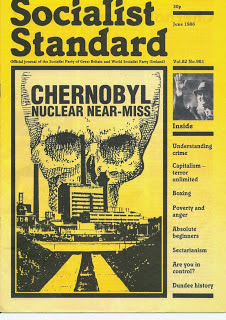 On the morning of 15 April, American planes bombed the Libyan capital of Tripoli, ostensibly in reprisal for Libyan support of terrorism, the most recent manifestation of which was the killing of an American at a Berlin disco. The planes were launched from US bases in Britain, indicating the extent of the British government's subservience to American policies and power. In the United States almost all politicians seemed to have jumped on the jingoistic bandwagon in support of the attack but in Britain even a number of establishment figures were critical of the government's acquiescence, and a number of other West European governments openly opposed the American action. The TV pictures of killed and wounded civilians, including children, in Tripoli served to emphasise the inevitable consequences of Reagan s adventure.

The Libyan bombing reveals yet again the bloody nature of capitalism and its attendant wars. It is not enough that there should be the unnecessary deaths of millions annually through starvation (in a world where food is destroyed because it cannot be sold profitably) and the continual violence and humiliation which constitutes daily life for wageworkers. In addition, capitalism's rulers frequently settle their differences — about control of the earth's wealth and inhabitants by warfare, killing and maiming in defence of their property and bank balances. Of course, it is not the rulers who do the killing and dying but the ordinary workers and peasants of the world.

Since he seized power in 1969, other capitalist governments have had as much trouble handling Libya's Colonel Gaddafi as they have had spelling his name. Cushioned by vast oil reserves and the wealth derived from them, the Libyan rulers have financed and supported groups from the IRA to Abu Nidal's Palestinian faction. The American bombing was avowedly aimed at curbing the Libyan state's support for terrorism.

Given that all capitalist states rely on the use of violence to protect their interests, one might wonder how they can dismiss some — but only some — forms of violence as "terrorism" and therefore beyond the pale of civilisation. The apologists' answer would generally be that the use of armed force by governments is legitimate, while its use by anti-government forces is terrorism. This distinction would have to be complicated slightly to allow for those violently opposing an enemy government. Reagan and friends would regard the Contras in Nicaragua as freedom-fighters, not terrorists. But in theory at least, the difference should be clear-cut: state violence is acceptable, indeed necessary, all other violence is terrorism and unacceptable.

The truth is that under capitalism all use of force, whether by governments in defence of the status quo or for conquest, or by would-be rulers wishing to gain power for themselves. is ultimately directed against working people. Whether labelled as terrorism or not. capitalist violence attacks the oppressed and exploited for the sake of their exploiters. Whether bombs in Tripoli or police charges in Wapping, violence is just one of the tools used by the capitalist class to defend and maintain their domination.

Socialists are not pacifists. If, at the time of the establishment of a socialist society, the overwhelming socialist majority were confronted by a recalcitrant pro-capitalist minority intent on sabotage and violence, we would have no compunction in using whatever force was necessary to suppress them. But socialism will be a society of peace and harmony which capitalism, with its in-built violence of armies, police forces and production lines, can never be.