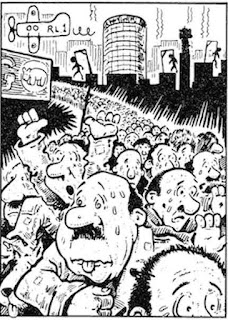 If I wanted to write a book that was longer and less interesting than a practitioners' text on Property Law. it would be a directory of all the most boring, unfulfilling and depressing jobs that people have to do today. Whether you work underground as a train ticket inspector or in a high-rise office block as a clerk, you only have to look around to see the "enthusiasm" that abounds on the faces of others. Think of how you feel when your alarm clock blasts you out of bed in the morning, regardless of whether you want to get up or not, that Monday morning feeling or the constant longing for the weekend. How much of our time is spent doing things that we really want to do? The drudgery of employment is made worse by its monotony, five to six days a week. 48 weeks a year, year after year. Yet those in work are described as the lucky ones.

With the rapid development of technology over the last century which has led to such advancements as the micro-computer and modern electronics, how much can we say the average person's lifestyle has changed, considering the full potential for change? Our lives are still dominated by the need for employment to pay the bills, buy housing and food and bring up children. "They live to toil so that we may toil to live" (William Morris). Most of our time is concerned with economic worries either at home or work. So, why does work nowadays take the form that it does?

In today's society, production is geared not for human need but for profit. Every thing that is produced can only be obtained if you can pay for it. Society, the world over, is split into two classes: those who own the means of living (the land, factories, mines, transport, offices) and those who do not own anything but their ability to work — the great majority of people. It is this social system that dictates the way we work. Employment takes the form of workers selling their mental and physical energies for a wage or a salary to an employer. In this transaction, the buyer (employer) has complete control over the direction the work takes. People are forced to work through economic necessity; the less money you have, the less access you have to what you need.

Because the employers own all the tools and instruments of production they have the power to dictate the quality of work, how fast it is to be done and. when it becomes no longer profitable to continue production, to make workers redundant. So workers have no control over their work. When new technology arises, as at Wapping, workers have no power to control its consequences. Thousands are cast into unemployment and for those who are kept on there is dull conformity and the constant threat of insecurity. People are slaves to the commercial interests of a small minority who, because they own everything, are legally entitled to the profits of the work done in their premises using their equipment.

The present conditions cannot be removed until the present social system is abolished. Socialism means a society without the employer-employee relationship — no job centres or cringing job interviews, no wages and no wasted people. A society of free access to wealth. Work will be voluntary, given according to ability and its main aim will be to satisfy human need, giving satisfaction in accomplishing this task.

Why would people work if they were not paid?

Firstly because the conditions of work will greatly change. People will enjoy full control over the work they do — a vital precondition of people enjoying their work. Secondly, people will be brought up to have complete freedom of experience and to choose a particular type, or types, of work they wish to do (one of the reasons work is so tedious today is the economic necessity of continuously staying in the same job, or line of work, while having next to no control over how it is done — conditions which usually lead to mental stagnation). No one will any longer have to do a job they do not like and we will not be restricted in working in a particular area or part of the world.

The only criteria for dictating what work we do will be what is socially useful and what gives pleasure. Many of the mass produced, characterless commodities of today will disappear. Only the best of whatever is possible will be produced and not, as now, a range of qualities based on what you can afford which William Morris described as the "harmful luxuries of the rich or disgraceful makeshifts of the poor".

There will be many more people to do the useful work as all workers of the present social system who are engaged in socially redundant or anti social tasks — the armed forces, police. lawyers, accountants, bankers. bookies, insurance workers; and all the victims of it — the starving, the unemployed, the war casualties and suicides, will be able to contribute usefully to society. All the people who are today employed in drudgery in factories, mines and offices will be freed from such enslavement. Technology could easily facilitate many of the most irksome aspects of necessary work and eliminate some of them altogether. General attitudes to work will change when there is a common understanding that all contributions to society will be for the benefit of all members of society. That benefit will be the reward of labour unlike today, when the normal day for many is either: work, pub, sleep or work, television, sleep.

Finally, working conditions will no longer be governed by profitability. In a society based on human need the workplaces will not need to resemble the factories, offices, hospitals and so forth of today where a minimum of safety, comfort and artistic creativity exist. With the restrictions of profitability removed, people will be able, where they work and where they live, to create the best possible environments to complement and inspire those who live and work there. The dark, gloomy factories and the high-rise and terraced slums will give way to civilised surroundings. The possibilities will be limitless. Let William Morris conclude: