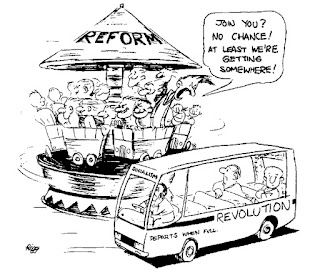 It has been a busy year for the reformers. There have been local taxes to abolish, NHS reforms to reverse, seven-plus tests to get rid of, the homeless to be provided with emergency shelter, bank charges to be made less harsh on the small borrower. Every year is a busy year for the reformer. No sooner has one minor concession been won—or, more often, half-won or quarter-won—than a ton of new problems, or old ones returned, fall upon society. The reformer's job is never done. The paint on the rusty machine is no sooner dry than it is peeling off.

The reformer is always busy. Petitions, marches, visits to MP’s, conferences of good-willed people to organise. Busy—too busy to stop and think. Have we been down this road before? Is the fight for a larger crumb worthy of their energies? When all the short steps forward are added to all the shoves back is any headway being made at all? No, the reformer has no time to think about that. After all, politics is not about theorising, says the reformer. They are people of the practical world.

Take the fight against the poll tax. Now, that was practical. No time to think about what taxes are . . . So, the opposition to the tax was mobilised and led on marches and forward unto the great victory of ... a new local tax.

To the reformist, with an immutable sense of the here and now, the revolutionary socialist presents a quite unacceptable spectacle. Here is someone who wants to go beyond the here and now into a system which is not here in a time which is not now, but could come as soon as the workers so decide. This discomforts the reformist because at root, despite all radical protestations to the contrary, the busy reformer is a hopeless conservative who cannot see more than the most trifling of changes as being possible. Reformists claim that revolutionaries irritate them because we seek what is impossible: we are “impossibilists”, to use the term of abuse applied to us back in 1904. But in reality it is the reformer’s conviction that nothing very much can change—a conviction shared between the left and the right wings of capitalist politics—which defines revolution as an unthinkable impossibility.

Sometimes the reformist will grant the necessity of a grand socialist change. But this must always be some time in the distant future. Reformists who flirt with the socialist vision turn socialism into a utopia. The conquest of the bakery is for the future, but for now the struggle for the crumbs must be all-consuming.

The political battle between Reform and Revolution is not a matter of tactical strategy: you take the high road and we'll take the low road. The reformist is taking the roundabout, never intending to stray from the here and now. All reformist talk about socialism in the future, but in the meantime . . . is so much hot air. The meantime of reformism is an eternity. Workers have died within this never-ending meantime. Indeed, it is a mean time, because the reformers aim is ultimately narrow and mean and constrained by a poverty of desire.

The revolutionary sets out to end and not mend the capitalist system. For the socialist there can be no such thing as humanised capitalism: the only good policy for capitalism is its abolition by the force of democratic, class-conscious action. Once workers get busy working for socialism, in larger and larger numbers, the owners and controllers of the Earth will shower us with piddling reforms. The capitalists will concede anything except their right to monopolise the resources of the Earth. It is this freedom which socialists, committed to common ownership, democratic control and free access to resources for all, will take away from the existing rulers.

The revolutionary seeks to defeat the class enemy—and defeat can only mean total defeat, i.e. dispossession. The reformist seeks to leave the possession of class power in the enemy’s hands and then plead for a better deal. It is a futile and time-wasting policy, however sincere its many advocates undoubtedly are.

Next year will be a busy year for the reformers—and the one after and so on into the next decade and century. Unless the political folly of Reform is understood. Unless the partial victories of the crumb-collectors are abandoned and workers realise that we have a world to win. Not to ask for, but to take.
Steve Coleman

If I'm not mistaken this issue of the Standard is the first appearance of Rigg's cartoon about the Revolution Bus - 'Departs when full'. It's been used hundreds of times since.