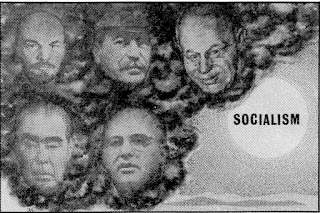 
A myth is being celebrated. The rejoicing conveys all the emptiness of idiot-priests delighting in the exorcism of a demon spirit. The slayed ghost in question is “communism". The claim is that it, together with Marxism, socialism and anything else at all that dares to question the immutability of the capitalist system, is no longer on the historical agenda.


So it was that Jean-Denis Bredin. writing in Le Monde (4 September), a few days after the dissolution of the so-called Communist Party of the Soviet Union, could state triumphantly:


Communism is dead—the word, the party, the empire, the theology, it’s all dead and everyone is happy . . . Mr Gorbachev was the timorous individual who started the progress . . . on the road which history had forced upon him. into the brilliant sunshine of the market economy. Are not the communists, if any are left, blind men and women who never understood that capitalism has taken over human destiny, that there would no longer be a Revolution but rather an eternal reform making the rich a little less rich, the poor a little less poor, not overnight but through the patient work of centuries. promising freedom and bread for all?

This crazed triumphalism has become an ideological hysteria, pushing the enemies of social change into ever new regions of intellectual arrogance in their assertions that—to use the catchphrase of She Who Was Deposed—There is No Alternative. What they are saying is that the decades of misery which followed the Bolshevik seizure of power in Russia in 1917 are proof that the consequence of deposing the dictatorship of Capital is ruin and grief. The tearing down of the statues of the Leninist leaders demonstrates, it is argued, that workers will never again be misled by those who dare to doubt the eternal life-span of “the brilliant sunshine of the market economy”.

The fundamental error—more than error: grand deception—upon which such reasoning is based is twofold. Firstly, the Leninist revolutions did not remove capitalism. Secondly, "the brilliant sunshine of the market” still does not shine upon the workers who form the majority of the world's population; on the contrary, we live under black clouds of debt, poverty, pollution, war, mass starvation, economic anxiety, all of which are direct consequences of the system of production for profit.

Lenin led to Stalin
Lenin and his Bolshevik Party were not socialists or communists (properly understood, the two words stand for the same thing: a society of common ownership), but élitists who sought to impose a new regime by minority insurrection. In the 19th century Engels had warned against the outdated notion that a so-called enlightened vanguard could emancipate the workers without the latter knowing about it. Marx had as his basic political motto that the working class alone could emancipate themselves, not leaders or vanguards.

By contrast, the Bolsheviks, in the style of capitalist revolutionaries such as Jacobins or Blanquists, took power in Russia where the workers were in a small minority and wanted only peace, land and bread, not socialism. It was impossible then, as it would be now, to establish socialism without a majority of socialists in society. It was inevitable that the Bolsheviks formed a dictatorship. The iron rule of Lenin, where opposition parties and newspapers were outlawed, the trade unions were turned into errand boys for the state, and secret police were at the service of the Party-run state, turned into Stalinism with all of its mass slaughter and torture and systematic suffering and pervasive lying. Stalinism was the product of Leninism.

In fairness to Lenin, his clique took power and knew that they had no hope of creating socialism in one country. Lenin was quite clear that the best that could be achieved was state capitalism in Russia. It was such a form of capitalism which was built up within the Russian Empire and which has failed so wretchedly. The Stalinists were to call this state capitalism “socialism” and "Communism”, and many leftists in the West convinced themselves that Russia was an island of socialist freedom in a capitalist ocean. They were as foolish as those in Russia who now look to Britain and the USA and see the mixture of state and private capitalism here as some sort of utopia. Distance creates absurd illusions.

The long history of the Leninist belief in the liberatory character of the Bolshevik regime has been one of the greatest obstacles to socialist understanding in this century. How often have we socialists talked of a free, co-operative, democratic social system to replace capitalism only to be told that if that is what we stand for we should go to Russia—where, incidentally, we would probably have been locked up for advocating such revolutionary ideas. The death of state capitalism and its naive supporters in the form of the Communist Parties can only be good news for socialists.

The Socialist Party has a proud record of exposing the pretensions of the pseudo-Communist dictatorships. While Stalin was being praised in Britain as “our democratic ally” we were exposing the purges, the show trials and the wage-slave status of the Russian working class. When Leninist newspapers such as the Morning Star, backed by money stolen from the Russian workers, told us about the happy lives of Russian workers and the peaceful intentions of the Warsaw Pact and the way in which nationalist and racist prejudice had been overcome within the Russian Empire, this party responded with utter scorn.

From food queue to dole queue
The celebrations in the West are all the more ridiculous when it is considered that orthodox capitalism is in the midst of a huge economic crisis which will be added to by the new demands upon the ailing Western economies to aid Russia and the new states which are coming out of its Empire. Bush has plenty of rhetoric to offer gullible listeners enchanted by his New World Order, a fairy-tale image of international capitalist unity, but is short on cash to pay for his little scheme. The fact is that the USA faces a record budget deficit; whole cities are on the brink of bankruptcy and working-class discontent is of a proportion which creates inner-city rioting and crime on a scale which makes Belfast look like a tame theme park. Is Bush to export to Russia and the Ukraine the economic wonder-drug which places the American workers in a position that one in five of them are living below the official poverty line?

As for the British government, its leader is so concerned about the coming of "freedom" to Russia that he celebrated it with a flight to visit his trading partners in the leadership of the brutal regime which butchered the workers in Tianenman Square. If Mr Lamont is to go to Moscow we suggest that the workers there prepare for a few more years of queuing, just as millions here queue for the dole in a country which tells talented and eager wealth-creators that it would be better for them to sit at home doing nothing because it is unprofitable to exploit them. The economic “experts" who are to lead Russia into the “free" market propose that there will be 30 million unemployed Russians within a year. Such is “the brilliant sunshine of the market economy”.

The Leninist left has no future. Those who went along with the nonsense of "Soviet socialism" are discredited and have one final historical task; to apologise to the workers for misleading them—and to socialists for getting in our way. The Right is in trouble because it no longer has the Russian bogey-man to frighten the workers with. Of course, there will be a sustained and vicious attempt to drown the vision of socialism in the muddy pit of the Leninists' grave. Anti-socialists have used this tactic since 1917 and have been more than adequately answered.

The future for genuine socialists—libertarians not statists; democrats not vanguardists; Marxists not Leninists; clear thinkers not sloganising sheep—is a good one. Our opponents in the Labour Party, who once posed as short-cut socialists, have now come out in the open as no-way socialists. Kinnock would be happier to be seen as a left-wing conservative than a real socialist. So, that red herring is out of the way. And the myth of “the socialist world" is now virtually buried. That leaves us with one final myth to shatter. The Big Lie: that capitalism can ever work in the interest of the majority.

The "magic of the market” and the miraculous power of “market forces" have enjoyed an improper reputation during the 1980s as having something to offer. That reputation will be short-lived, not simply because we socialists are going to expose its falsity at every turn, but because the market itself will fail to deliver the promised goods to the workers. Frustration will create an appetite for an alternative. Not a phoney alternative, as workers have so often fallen for. but the genuine socialist article: common ownership and democratic control of all the resources of the planet by all the people of the planet. Communism is dead? No, it has yet to be tried. And when the recognition that common ownership is the answer dawns upon more and more workers, as surely it will, the swines who bathe in "the brilliant sunshine of the market economy" will experience a severe case of sunstroke.