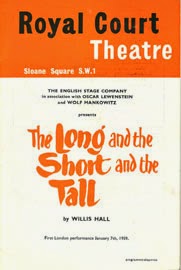 Theatre Review from the March 1959 issue of the Socialist Standard

As might be guessed, "The Long and the Short and the Tall" is a play about men at war, written by Willis Hall and presented by the Royal Court Theatre. It is not a great play; it is not great drama or even great entertainment but as the characters come to life' as the action of the play unfolds itself, it highlights some interesting and important points.

A British Army patrol takes a Japanese prisoner in an area forward of the main fighting line in the Malayan jungle. At the end of the play, the patrol itself is encircled and trapped by the Japanese troops.

The play reminds us of the vicious anti-Jap propaganda of the war years when soldiers were taught to expect in their enemies a kind of sub-human order of life. Japs were alleged to be little yellow people with slanted eyes that denoted the worst kind of calculated slyness. Their protruding teeth eventually became animal-like fangs, and they were all obsessed with the plan to exert a malignant perverse cruelty on humanity at large. The Japs, it was said, just because a hatred of democracy was inherent in their national character, had decided to enslave and torture the peoples of the earth. Unless they were thwarted, a future was postulated where the entire earth would be in the grip of "things" beside whom Dracula and Frankenstein would pale into friendly, amenable good chaps. Thereby war and retaliation became not only justified but crucial to the survival of Western society and its democratic institutions. This was a bitter lie.

The soldiers had been sent to Burma and had begun fighting in an atmosphere of deliberately contrived hate, How strange, then, how completely taken by surprise were they when the first prisoner they took appeared to be "almost human." He was actually frightened: he seemed to expect his death because no doubt he had heard and believed the Japanese propaganda about "British monsters."

But the prisoner was not immediately killed and the few hours that followed allowed a pathetic fragment of a personal friendship to develop between him and his captors, and as it developed, the greater became the lie of war propaganda as compared with their personal experience. "He's human," his captors reiterate, as the Japanese soldier smokes a cigarette and produces photographs of his wife and children. "He's a family man. He's one of us."

The contradictions pile up. The biggest collection of loot is held by the blue-eyed boy from the Church Army who doesn't like to swear and curse. "We're fighting for the democratic British way of life," says one cynical squaddie, "but there's no democracy in the Army."

For a moment they lapse into confused disillusion.

The tragedy was that they didn't think enough.

The complete ignorance and lack of any coherent idea about the cause of war adds further tragedy to their desperate position. On stage the characters mill about violently involved in a situation they don;t understand.

The play makes ridiculous the bogey's placed in people's minds by the mass propaganda agencies about the enemy during war and times of preparation for war, and though it's 1959 when the play is presented and not 1939 when it had a more critical social relevance, one can welcome the way its central theme cuts through the nationalist fervour that usually surrounds war and spotlights war as a human tragedy.

Though the play is an expression of indignation that war should ever happen, its contribution to the understanding of war as a social problem is deficient and superficial.

For a real analysis, we must move beyond the narrow language of this play and begin to use the higher abstractions of political discussion.

The views about war expressed in the play are crude and shallow and yet in real life are often repeated in seriousness.

So we must ever fear that whilst such ignorance prevails violence and military strength will remain the arbiter in the settlement of international disputes and the world's workers will yet make fodder for the atomic cannon.