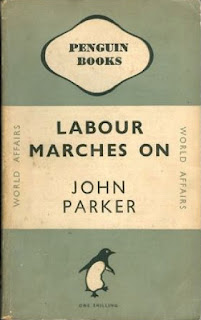 Book Review from the July 1948 issue of the Socialist Standard

Mr. John Parker's book, "Labour Marches On" (Penguin, 1s. 6d.) is a haven of peace after the exhausting thunder of its companion volume, Hogg's "Case For Conservatism." Mr. Parker writes quietly and modestly, and makes one think of him as a nice, modest man. After reading his book one realises that, in the matter of political understanding, he has plenty to be modest about.

Mr. Parker's case is that the Labour Party represents "the latest attempt of the forces of the Left to extend the rights of the common people against the forces of privilege which always tend to support the political Right." This, of course, means less than nothing, though it does seem a pity that in such a blaze of jargon the words "progressive" and "reactionary" have been left out. However, Mr. Parker goes on to inform us that two main strains went to the creation of the Labour Party: "the Socialist Idea" and the desire of the Trade Unions to secure representation in Parliament. Had he stuck to the latter in talking about the origins of the Labour Party, Mr. Parker would have been on fairly safe ground; as it is, he insists on the former, and thereby reveals that his "Socialist Idea" is as knock-kneed as most of the other ideas that march through "Labour Marches On."

"Socialism," says Mr. parker, "means the ownership or control of the main resources of the community on behalf of the community," but it turns out that all he means is nationalisation. Fortunately, we know that Socialism is nothing of the sort, and that the Parker definition is only a particularly juicy specimen from the bag of carrots that the Labour Party keeps for dangling before working-class noses. What Mr. Parker needs to be told is that capitalism, the system in which the whole community does not the means of production, does not become any more acceptable when it is dressed up in the terminology of the Left Book Club. The working class is concerned, not with the question of who administers wage-slavery, but with the existence of wage-slavery.

According to Mr. Parker, the whole conception of Socialism owes its existence almost entirely to those clever Fabian Society people. Mr. Parker is himself a Fabian, by the way. He tells us how it was the Fabian's hope to establish Socialism through the Liberal party, and how that hope was raised when many Fabians were adopted as Liberal candidates in the early 1900s. As the Liberal Party was, had always been, and is today an avowedly capitalist party, it would seem that the Fabians' "Socialism" was not altogether what it made itself out to be. Their hopes went awry, alas, because "Lloyd George did not become a Socialist"! There is a cursory mention of "the German refugee, Karl Marx," who merits no more than three lines because his writings "had far more effect upon Socialists outside this country." If Mr. Parker was not, like his fellow-Labourites, bound hand and foot by nationalism, he might not dismiss any Socialist as ineffective on such a ground.

There are the usual excuses for the failure of the two previous Labour Governments to produce the goods. Mr. Parker describes the period after 1918: "Most of the fine talk of 'Homes for Heroes' failed to materialise . . . profiteering was rampant . . . strikes and unemployment were soon the order of the day." Things are scarcely different in 1948. However, the Labour Party took advantage of these conditions and gained sufficient support for the first Labour Government to come to power in 1923. Of their short-lived reign, Mr. Parker says: "Labour was thus called on to take office for the first time without having anything like a majority for carrying out its specifically Socialist programme; in fact it was dependent for day to day support unpin the Liberal Party." This, of course, is the standard Labour excuse for that sorry episode. However, listen to another writer: ". . . this reason for the inability of the 1924 Labour Government to do anything tangible for the benefit of its supporters will not bear examination. The Liberal Party, which formed the necessary support of the Labour Government in the House of Commons, was anxious to press on with the extension of that system of social services which it had initiated." That was Mr. Strachey, that was. ("The Menace of Fascism").

Of the second Labour fiasco, Mr. Parker says the blame must be apportioned in part to the world economic slump and in part to ineffective leadership. Listen again to Mr. Strachey: "To their dismay, the Labour Ministers discovered that the real task of anyone who chose to administer the Government for British Capitalism was to apportion the sacrifices which the crisis was making necessary . . . And somehow or other it seemed inevitable that, under the existing economic system, by far the heaviest penalties should fall on the workers."

The remainder of "Labour Marches On" is the familiar hotch-potch of nationalisation, social security, promises of full employment and the like. We are concerned here principally with the historical case that Mr. Parker puts forward for supporting the Labour Party as a Socialist Party. As Strachey pointed out (in the days before he became a Labour Minister, of course) the previous Labour Governments failed for the precise reason that their object was not Socialism. Like the present Government, they discovered that capitalism can only be run in one way—against the interests of the working class. The Labour Party does not represent the desire of the workers for Socialism but, on the contrary, gains its support from their lack of political consciousness.

It is hardly necessary to say that the present Government will go the way of its predecessors. Socialism is not a promised land to which the working class will be guided by clear-sighted, high-minded leaders. When it comes, it will come through the action of the working class itself, without the need for leaders. Neither is Socialism the pet idea of Fabian intellectuals. There is only one "main strain" that leads to Socialism and that is the ever-worsening conditions of the present system. It might perhaps be said that in one way the Labour Party will contribute to the coming of Socialism, and that is by showing the working class than no amount of "planning" and no number of reforms can alter the basic facts of capitalism, and that the problems and paradoxes of that system will remain until it is abolished.