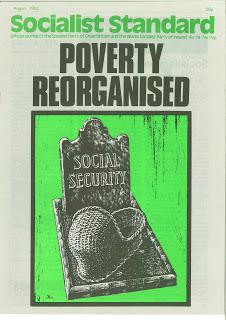 From the August 1982 issue of the Socialist Standard

Forty years ago, at the time of Beveridge, the modest aim of social insurance was to guarantee to every citizen in the event of unemployment, sickness and old age "the minimum income needed for subsistence”. When National Insurance was introduced in 1948 the Attlee government expected that as it developed means-tested supplements would become unnecessary. Socialists knew that plans for National Insurance would not end the poverty of the working class.

Now nearly 1 in 10 of the population gets at least part of its income from supplementary benefit. The social security system, which includes national insurance and supplementary benefit, has become a kind of monster. It accounts for 28 per cent of public expenditure. Yet poverty and insecurity are still part of working class life. There are dozens of different benefits, some administered by central government and some by local authorities, with many different procedures to get them.

Over the years changes have been made in the scheme; other plans, especially for pensions, have been studied. The graduated pension scheme which was wound up in 1975 was used at times by Conservative and Labour governments to raise money in the present without improving pensions in the future. The latest pensions scheme has earnings related contributions for an eventual two-tier pension and will, it is hoped, reach maturity in twenty years  . . .  Retirement pensions amounted to 50 per cent of the total social security bill for 1978/79. The position of pensioners illustrates the complexity of the system. The basic weekly retirement pension for a married couple of £47.35 (plus 25p if aged 80!) is inadequate to live on without supplementary pension to help with housing costs. Those who qualify for this supplement are then entitled to claim additional allowances.

Some who qualify for supplementary pension may be a little better off claiming s rent and rate rebates instead, while others outside the limit for supplementary pension may still get rate and rent rebates. About 50 per cent of pensioners have occupational pensions which, with their state pensions, are just sufficient to take their income above the supplementary level and disqualify them from additional payments. Many pensioners claim to manage tolerably well — membership of the working class has given them years of practice — but it is the breakdown of health or other disaster that underlines their vulnerable position. The system of supplementary payments and the small amounts disregarded when assessing allowances, means that pensioners and all those who depend on the state have varying incomes. Schemes which would pay enough to remove the need for all kinds of allowances are more expensive than means-tested benefit paid to those "really in need".
Pensions, sickness and unemployment benefits under the heading of National Insurance have entitlement related to contributions. It is Supplementary Benefit which causes most controversy, for those struggling to live at or near subsistence level and for others who imagine the recipients of state “handouts” are scroungers who live in luxury. Supplementary benefit is a small part of the social security system. In 1978/79 £2.500 million were distributed, nearly 15 per cent of the total social security bill. (In 1979/80 the net value of tax forgone in respect of mortgage interest amounted to nearly £1.500 million.)

Benefits that are means-tested are calculated as a matter of arithmetic. Only 6 per cent of the money handed out by the Supplementary Benefits Commission was within their discretion, but this is the area which gives rise to the myths about special treatment and prejudice. The system of "discretionary allowances" gives a few claimants an "exceptional circumstances addition" which might be for extra fuel, or a single payment perhaps to replace footwear. If this sounds like a caring state looking after every need of its poorest citizens, the discretionary system "is one of the most arbitrary and meanly operated parts of the entire Welfare State (J. C. Kincaid. Poverty and Equality in Britain). These payments must not be looked on as a right but are reserved for those particularly "deserving". David Donnison was Chairman of the Supplementary Benefits Commission from 1975 until its dissolution in November 1980. In The Politics of Poverty he points out that if every client asked for every discretionary payment available, and then appealed, the pressure of work on local offices would cause the system to collapse. Staff had to deter claims. The "rules of thumb" invented by local offices to replace the book of rules which had "grown into several massive volumes", were kept secret; they varied in different offices and for different claimants. There was prejudice against the unemployed who tend to be among the poorest claimants (losing entitlement to national insurance benefit after 12 months and not eligible for the long term rate of supplementary benefit) and are least likely to win appeals.

During his time with the SBC Donnison set out to review and change its principles and practices. The dilemma of reformers is put neatly by him, when he wonders if half a loaf would be better than no bread (the result is usually crumbs). The Commission decided to support the Social Security Bill (1980) even though the resulting changes would be made without spending more money or increasing staff. Improvements they had sought for the unemployed, and a twice yearly lump sum grant for all claimants which would "make a drastic reduction in discretionary payments tolerable". would not be made. The system has been simplified and its rules made clearer. There is less discretionary benefit, and a Specialist Claims Control adding to the misery of the poor by zealously testing the validity of their claims. (Is this the "special case officer" Donnison was expecting to have more time to help claimants "sort things out"?) Working for reform meant gaining the sympathetic interest of the right officials, MPs and Ministers, regardless of party.

Pressure groups work in a similar way. Organisations like the Child Poverty Action Group and Age Concern assemble information, collect signatures and compete with each other for money. Their most successful work has been in taking up the cases of individuals. The SBC had listened to, and even advised, pressure groups, but in 1979 a Cabinet Minister dismissed members of the poverty lobby as " . . . crickets in the field”. They were not leaders of a movement. The Callaghan Government had kept quiet during the May 1979 election about its decision to increase Child Benefit, thinking it would be unpopular. Opinion polls after the March 1980 budget showed an increase in support for the Government: cuts in social security did not invoke mass protest.

Poverty is not a popular cause. Against the background of recession other workers have their own problems, and in any event accept that some of them have better living standards than others. Unions will fight to defend wage differentials. In a competitive society the converse of the idea that those who "get on" do so by their own efforts is that the poor are somehow to blame for their position.

The same kind of reasoning suggests that many of the unemployed choose not to work because of the generosity of benefits. The scale of fraud is also exaggerated. Claimants are more likely to get less money than they are entitled to. Unclaimed benefit is reckoned to have been worth £400,000,000 in 1979 (Guardian 21 June 1982). Less than 4 per cent of workers would not be much worse off if they were unemployed. Put another way "several hundred thousand households are affected” (Guardian, 23 June 1982) by a poverty and unemployment trap which makes families worse off by earning more (because of reduced benefits) and not much worse off if unemployed.

The government is facing opposition from its backbenches over its refusal to restore the 5 per cent cut in unemployment benefit, made last year, before taxation of that benefit starts this month. Two charities object to Norman Fowler’s plan to give allowances for the care of handicapped people priority over restoring unemployment money. Mr. Tim Yeo, director of the Spastics Society said:

Many of the disabled are also unemployed. So by not restoring the 5 per cent cut in unemployment benefit to pay for an increased invalid care allowance would be giving with one hand and taking away with another (Guardian, 5 July 1982).

Successive governments’ intentions to help the "less well off’ (modern euphemism for poor) are inevitably linked to improvements in the economy. The bank of England has forecast only “modest" economic growth and unemployment is expected to stay at the present high level. Far from becoming unnecessary, cuts in insurance benefits indicate more dependence on means-tested supplementary benefit.

The social security system will continue to be amended. Reforms being put forward include ending the married man’s tax allowance in order to finance substantial increases in child benefit. All of the suggestions are made in the context of a social system which always considers cost before need. The aim is still to give the minimum amount necessary to sick, elderly or out of work members of the class whose “normal" way of getting money is through employment.

It must not take another forty years for the working class to discover that the problem of poverty, however defined, will not be solved by reform.
Pat Deutz
Posted by Imposs1904 at 7:23 PM