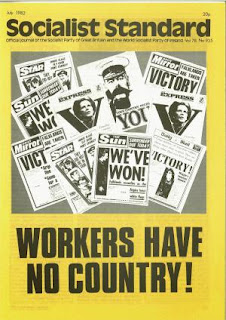 From the July 1982 issue of the Socialist Standard

What sort of picture is conjured up in your mind by the thought of foreign travel? The travel agents are working their hardest to whet your appetite: in their brochures the sun shines every day, the grass is greener than anywhere else, the sands are pure golden and the sea a lovely clear blue with no hint of any oil slicks or bits of sewage, wreckage or plastic beakers. Then there are the hints of sexual pleasure. These pictures of people on package holidays on the Costa del Sol or Corfu, or wherever it is, usually show them cavorting happily in their swimming trunks and bikinis. And if you wanted to be really naughty, there are holidays on offer to famous towns where, in addition to soaking up the history and “culture” on offer, you can indulge yourself a little after dark by visiting the Red Light area—if, that is, you have any cash left by then.

One of the arguments frequently used by those who tell us how much better off we are than our forefathers is the number of workers nowadays who go abroad for their holidays. It cannot be denied that many more do so than was the case even 25 years ago, and before World War II it was difficult to find a worker who had been out of the country other than on military service or in connection with his work and even that was uncommon. By far the biggest factor however is the cheapening of the holiday. When Edward VII was on the throne, continental holidays were expensive affairs which only the wealthy could afford. Cheap holidays for workers had only just come in. The excursion platforms at Blackpool Central station were built at this time to receive the traditional exodus from Glasgow during the annual holiday week. (Those with a little more money would go to the neighbouring, posher, resort of Lytham St. Anne’s.) Even to-day this is the only holiday for many Glaswegians. The changing pattern does not mean that the masses have risen to the level of a holiday abroad: it is the latter which has descended to the level where workers can afford it. Enjoyment, recreation and travel are all businesses now. Just as Blackpool is shoddy (or workers could not afford to go there) so cheap hotels and holiday flats are mushrooming on the Costa Brava so that the holiday trade can reap its profits.

The multiplicity of travel firms with their gaudy brochures and television commercials testify to the cut-throat competition in this business. What Winston Churchill once described as “terminological inexactitudes” abound, and many hopeful workers have been shocked by facilities which do not live up to their billing, and in some cases are nonexistent. The ruthless competition has led to a high degree of instability in the trade. Workers who have been saving, often for a long period towards their break from routine, have found themselves stranded and embarrassed when the firms they booked with have gone bust. The financial structure of these companies is often as ramshackle as the holidays they offer if they do stay in business. The collapse of Court Line in 1975 and Laker Airlines earlier this year testify to this, although Sir Freddie’s breakfast, like the kippers and champagne of the swindler Horatio Bottomley before him, will still come out of surplus value extracted from the working class.

What awaits these travellers when they reach their destination? How different will things really be from what they have left behind at home? In William Morris’ News from Nowhere the narrator wakes up from a dream to find himself in the twenty-first century. Capitalism has been abolished and common ownership is in operation. On going into what he took to be a shop, he is most surprised to be told that he can take all he wanted and that no money was required. He was told that England had become “a garden where nothing is wasted and nothing spoilt”. If only we could come back from our holidays, if we can afford them in the first place, with such a talc to tell!

Even on the cheapest, most rushed of package tours, no-one could get by without some foreign currency to satisfy essential needs. Everywhere in the world goods are produced for sale, not for use. The overwhelming majority are compelled to sell their labour power for wages while the minority who buy this labour power live off their backs. In fact, so completely is the rationale of the present economy accepted, so impossible do most workers still find it to consider living in any other manner, that attention is automatically fixed right from the start on small local variations which become magnified out of all proportion.

As I occasionally travel abroad on “firm’s business”, I find that examination of the apparent differences between countries actually reinforces the essential sameness of capitalism everywhere. For instance in Athens, Paris, Hamburg and New York—cities where I have been in the last three years—public transport costs are much less than in London. In New York there is a 60 cents charge on subway and buses, irrespective of distance. This was useful to me when I managed an afternoon’s sightseeing, but that is not why these cheap fares operate. The operation is effectively subsidised by capitalists who exploit New York workers in order that lower wages can be paid. As long as these employers believe they are getting value for money, the cheap fares policy can be expected to continue; but different policies will be pursued if it is felt that the scheme is not operating profitably. Los Angeles—apart from inner city ghetto areas such as Watts—has virtually no public transport at all. These differences are of emphasis only and the arguments involved are of concern to the capitalists. It is they who foot the bill.

A visit to Hamburg directs attention to the way capitalists of various countries tackle the problem of prostitution. The Daily Telegraph (27/11/81) devoted some space to comparing British, Dutch, French and West German practice. In West Germany brothels and soliciting are legal only in special controlled zones. In the St. Pauli district of Hamburg about 2,000 prostitutes operate in an area of one square kilometre, where there are also striptease clubs and other sexual stimulus. The rest of the city, where all this is illegal, seems to be largely free of these “sins”, and a police spokesman who is quoted as seeing advantages in the system because it means less work has got a point. But so too does the more “moral” type of capitalist who argues, much as Mary Whitehouse, that if brothels arc licensed they will acquire an aura of respectability. Despite the apparent differences these viewpoints are in basic agreement in concern for capitalist values, and the only question again is one of emphasis.

The contrast in housing standards between the two classes in society is just as clear wherever you go. The modern trend towards high rise flats in place of the earlier back-to-back terraced houses (of which there are still plenty in industrial towns such as Leeds and Bradford) is obvious, with only a few local variations in style. In Hamburg, because of wartime devastation, older buildings can be seen only in a small area near the centre— which may deceive the casual observer—but this was the only apparent exception to the rule.

Attending meetings at foreign firms and using their facilities such as workers’ canteens has given me every opportunity of observing the essential world-wide similarity of paid employment, or as it is better described, wage slavery. Indeed, what differences could there be? When on a package holiday there are factors operating which may cloud this basic unity. The tourist will not be going to work, which in itself can make things look better than they really are. And, although the local people will practically all be workers, the fact that they are employed in the holiday trade and their living depends on making the tourist as happy and relaxed as possible means that holidaymakers’ experience and impressions are not likely to form a representative picture.

It is not easy to obtain figures on the distribution of wealth and property in various countries which can easily be compared. This is due to considerable differences in definition and the way the statistics are compiled. It is clear however that the basic fact of class monopoly of the means of wealth production is the same all over the world, irrespective of whether governments admit to being capitalist or claim to be socialist or communist. The use of money means that the wages system is in operation. In turn this shows that the majority have no stake in the means of living and, in order to survive, must sell their talents to the owning minority. However some comparative figures were published in The Times (14/3/78). These concern post tax personal income of households, which is a gross understatement of the wealth of the wealthy because it excludes permanent wealth in the form of capital and land. On the other hand, it also excludes incomes in kind such as school meals and subsidised housing, but these items are virtually infinitesimal in comparison. The survey encompassed eight countries: Australia, Britain, Sweden, France, Ireland, Canada, Japan and the United States. The share of the top twenty per cent surveyed varies from 39 to 46 per cent of the total, while the share of the bottom twenty per cent varies from 4 to 6 per cent.
You cannot run away from capitalism by taking a trip abroad, as the system is basically the same everywhere. There is a way out however. Socialism will work in the interests of everyone. While we may still wish to see how others live in different climates, none would feel compelled to travel anywhere to “get away from it all”.
E. C. Edge