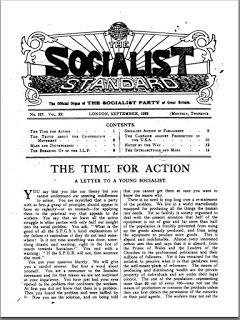 
In the July issue of the Socialist Standard we explained why a Socialist Party must be based on, and must fight elections on, the simple demand for Socialism and not on a programme of reforms or even on the demand for Socialism linked up with a programme of reforms. Several correspondents have now asked what should be the attitude of a minority of socialists in Parliament or a majority or minority on a local council towards measures introduced by capitalist parties. We print below one of these letters: —

To the Editorial Committee.

For the benefit of a few readers of the “S.S.,” could you give the Party’s position upon a few points that arise from the 6th Clause of the Declaration of Principles.

Seeing that Socialism is the object of the Party, and that the 6th Clause is the method advocated to get power to establish it, what would be the attitude or position of a single candidate or a few S.P.G.B. candidates who were elected by class conscious electors to the House of Commons, towards the problems discussed by capitalist politicians?

What would be the Socialist attitude towards the following measures that were being put on the Statute Book by, say, a Labour Government ? :—


What would be the attitude of the single socialist or a minority of socialists on the Local Councils towards the problems discussed in Council ?

Finally, in the event of a few Constituencies voting a majority of Class Conscious Socialists into power in the local councils, what would be their attitude from the point of view of administration of Council work?

Hoping a reply to the same will fulfil a useful purpose,

Reply.
The Socialist Party of Great Britain has as its object the establishment of Socialism. It is a revolutionary party based on the class struggle, and not a reform party. Holding that no amelioration of the workers' condition can be obtained under capitalism that would be worth the amount of time and energy spent in working and organising to obtain it, the Socialist Party is opposed to the waste of such time and energy, and to the confusion involved in attempting to improve capitalism by means of reforms, thus obscuring the class struggle. A party claiming to be socialist, but with a list of reforms or “immediate demands," attracts reformers who are not socialists, and has a reformist and not a socialist electorate behind it. Even if such a party obtains political control it is useless for the purpose of furthering Socialism.

While the S.P.G.B. is opposed to a reformist policy the socialist delegate in Parliament or on a local council is not, therefore, bound to vote against every particular measure. The Socialist Party of Great Britain does not hold that the measures already taken or to be taken by the capitalists are all of them bound to be useless or harmful to the workers, or bound to impede progress towards Socialism. Some of the suffrage, factory and trade union legislation in the past, while assisting capitalists immediately or in the long run, has not been correspondingly harmful to the workers. The Socialist Party holds that some of the measures brought forward by the capitalists owing to economic developments or owing to conflicts of interest between sections of the capitalists themselves can be used as weapons in the class struggle by the workers and by the socialist movement. That being the case, a socialist minority in Parliament or on a local council would be required by the socialists who sent them there to criticise from the socialist standpoint all measures brought before them (pointing out their futility in comparison with Socialism and so forth), and to refrain from supporting, bargaining or allying themselves with any party for temporary ends, but at the same time would be required to vote for particular measures where there is a clear gain to the workers and the socialist movement in so doing. (The decision would, of course, be in the hands of the Party, and not in the hands of the individual.) It may be added that such measures are more likely to be put forward when Socialism is imminent, and a frightened ruling class is striving to keep back the flood by making concessions.

The position which the S.P.G.B. has always taken up, and which is outlined above, differs fundamentally from the position of candidates elected on reform programmes by reformist voters. In the case of socialists elected on a socialist programme, the decision lies with socialists, well able to judge the merits from a socialist standpoint. In the case of reformists (the I.L.P., for example) the decision rests with a party and an electorate which do not know and accept the socialist case, and are incapable of judging from the socialist standpoint.

With regard to the issues raised by our correspondent, it is of little use to give a yes or no answer, because the effect of particular measures depends on the time and circumstances and the actual clauses of the measures in question. It is not sufficient merely to be told that a bill is described by its supporters as a bill for a minimum wage, or for an improved compensation law, etc. Advocates of a minimum wage have often associated it with the prohibition of strikes, and a Minimum Wage Bill might have tacked on to it a clause penalising strikers. The abolition of the Means Test may look like a clear issue on which a socialist minority would be instructed to vote for abolition, but it must be borne in mind that a proposal for its nominal abolition would probably be linked up with the imposition of some other objectionable procedure.

What is stated above in connection with a minority in Parliament explains also the attitude of a minority on a local council. A socialist minority on the London County Council, for instance, would vote for a proposal to restore the right of selling literature and taking up collections in London parks since the S.P.G.B. are the chief sufferers from the prohibition introduced a few years ago.

Our correspondent’s last question refers to a majority on a local council.

By the time a few constituencies had voted a majority of class conscious socialists into control of the local councils the rest of the country would be on the verge of doing the same thing, and on the verge of sending a majority of socialist delegates to Parliament also. If such a hypothetical situation arose the socialist majority would use the limited power, funds and organisation of the municipalities to help with the task of capturing the central seat of power, in every way available.

In conclusion, we must emphasise that the object of the Socialist Party of Great Britain is the establishment of Socialism. This purpose, in an organisation based solely upon the demand for Socialism, and putting forward candidates on that and nothing else, cannot be forgotten or submerged. Our policy, our organisation, and all our activities are governed by that objective. The question of voting for or against, or ignoring measures introduced by non-socialist parties, does not and cannot influence our policy towards the objective.
Editorial Committee