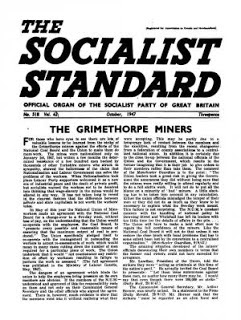 From the October 1947 issue of the Socialist Standard

British capitalism is facing difficulties. After a long and exhausting war it has had to change over from production of things for war to production of things for peace and the world market. Considerable plant, machinery and capital equipment needed renewing before it could tackle the re-conquest of markets lost during the war. The British capitalist class had accumulated debts abroad where it had formerly held investments. Clearly the tasks were formidable. Every political party proposed ways and means of putting British capitalism back on the map and the British capitalists in their former position of prestige and privilege. That is to say, every political party except the Socialist Party of Great Britain. All Parties talked of the necessity of recovering “our” trade and “our” markets. “Our” position as a great power must he re-established in order, they said, to maintain the workers’ standard of life. In this latter connection Mr. Bevin has gone further than most labour leaders. Speaking some weeks ago on the military occupation of the Middle East by British troops he stated his opposition to their withdrawal on the grounds that the standard of living of the British workers would fall by twenty-five per cent. Presumably, if the troops had to go into action, Mr. Bevin would argue like Mussolini when he sent Italian troops into Abysinnia, that they were fighting a proletarian war! The suggestion that British oil interests require the occupation might appear to honest, bluff Bevin as cynicism. Nevertheless he will have great difficulty in persuading the more informed workers that British capitalists bear the expense of an army in order to maintain the workers’ standard of life. This sort of argument is more in line with the poorest kind of pre-war, Tory imperialist propaganda.

At the Trade Union Congress at Southport Bevin expanded somewhat further on a similar theme and alarmed some of the Labour Party’s “left.” His speech ostensibly covered foreign affairs but its main purpose was to impress the workers of the necessity to work harder, work longer hours and to accept a lower standard of living. Possibly anticipating objections from sections of the Labour Party and the Trade Unions who wanted to argue in favour of abolishing conscription, a substantial reduction of the armed forces and in the production of munitions as an alternative to asking the workers to accept a lower standard of living to solve the “crisis,” he said : “I am a believer in disarmament hut I am not going to be a party to it until I have real collective security. I represent a London constituency and I am not going to leave those people to what Conservatives left them exposed to in 1930-40.” The reflection on the Tories need not concern us. The implications of that statement have caused more than flutterings in some quarters of the Labour Party. Some of the attacks on Bevin in the issue of Tribune following the conference were as bitter as many that were made on MacDonald after he deserted the Labour Party in 1931. His constituents will no doubt be touched by his solicitude for their welfare in a future possible war. But if he would consult them he might find they would accept any alternative to war.

In fact, Bevin’s position as foreign secretary in a government committed to the administration of capitalism leaves him very little choice. Capitalism needs the armed forces and a great deal depends on the show of force it can muster in given circumstances. There is a point below which munition production and reductions in the armed forces will not be permitted. The Labour government and the Trade Union leaders must find other means to overcome the crisis. Mr. Bevin asked the delegates to approve of the workers being asked to accept sacrifices, not, of course, without sugaring the pill with more promises. He argued that if the workers would produce another thirty millions a month for export they would reduce the balance of trade by 370 millions, if they would produce a further 20 millions per month they would have the food cuts restored, if they produced a further 50 millions per month it would leave room for the demand for a higher standard of life which the younger generation would be demanding. The Times took Bevin gently to task for this last suggestion. It had spoiled, it argued, a “great speech.” It agreed with the target but thought Bevin was “courting disaster” to suggest there might be a rise in the standard of living in the coming years of crisis. It can be expected that the Times will offer much more advice in the future in their efforts to see that the Labour government does not “court disaster.” After all, was it not the Governor of the Bank of England and highly placed officials of the Treasury who advised Mr. (song in the heart) Dalton that it was quite sound to allow the free convertibility of sterling into other currencies, advice which it is claimed hastened the impasse in which the Labour government found itself. And who else is more competent to advise on running the capitalist system (for the best interests of the capitalists) than the foxy old officials who have been at it for years and know all the answers? There have been other labour leaders who accepted the advice of the capitalists. They met disaster after the wily capitalists hud played their cards. They also were great ” leaders in their day.

The Labour government and the Trade Unions are committed to the task of running capitalism successfully. Goods owned by the capitalists must he sold on the world’s markets. They find that they stand no chance of success without the workers’ acquiescence in accepting still lower standards of living. Consequently, in common with the capitals press the Labour Party organisation has been working overtime on the refrain that the workers should work harder . . . and still harder. The necessities of British capitalism demand longer hours and greater productivity. And because the Labour government is in control it is compelled through the trade unions to come to the workers to attempt to cajole them into agreement. “Events are in control," said Attlee in a recent broadcast From the Times to the Daily Worker  all agree that the solution is in the hands of the workers. M.P.’s from Earl Winterton to William Gallacher, all join in the refrain. Was the workers’ apparent indifference to this propaganda the subject of conversation between the noble earl and the Communist M.P. when they were seen (according to the daily press) walking arm-in-arm in the lobby of the House of Commons? Everybody who is anybody joins in the new symphony, especially those who have never worked in their lives in the sense that they ask the miners and other workers to work. Never was more point given to the Socialist contention that all wealth is the application of human energy to nature-given materials. Never did it stand out more than today. The British capitalist class and their hacks are worried, and the more worried they get the more they affect an unctuous concern for the welfare of the worker. Unless productivity is increased considerably, they argue, the workers’ standard of living will fall below that existing in the smaller Balkan states. What our masters fear of course is the threat to their own security and well-being. What the hacks and the hirelings of the press, pulpit and politics feat is that their own comfortable places in the capitalist scheme of things might be undermined. Did any of these lackeys show as much concern for the workers' standard of life when in the days before the war millions of workers lived below the poverty line? One research organisation in the days before the war conducted an experiment on rats with the dietary of workers in a depressed area . . . and killed the rats!

Congress submitted a report to the Trade Union Conference arguing the case for harder work and longer hours. Delegates countered with an amendment calling for direction of labour so that “other sections of the community shared some of the sacrifices.” The Minister of Labour in the Labour government who attended the Conference (as did other erstwhile labour leaders who are now on the boards of nationalised companies at fat salaries and expenses) hedged. It can be definitely asserted that there will be no direction of labour of the kind which will include “the other sections of the community.” Debutantes are not going to be directed into textile factories. Members of the royal family will not don the industrial overall as they donned the army uniform during the war. Mr. A. J. Cummings of the News Chronicle, who rivals the “ Gloomy Dean,” will not attempt to overcome his sad depressions when he contemplates the sins of the workers by advocating or joining an industrial “Home Guard.” The porter at the News Chronicle offices need not fear that A.J. will take over his job whilst he enters a factory in the country’s emergency. The war is over. Lease-Lend is finished. As Sir Stafford Cripps has said, English goods are entering a highly competitive market and costs must be kept down. Only workers can do the latter, workers who can be made to feel the pinch of economic pressure. When the Labour government says workers it means workers. They will obtain them for the industries where they require them by a policy which will close down the less essential to the capitalists for the time being. The scope for employment will be restricted. The worker will accept what is given to him or the alternative of being unemployed without even the dole. It can be imagined that the passing of a few months is likely to see the press referring, to the unemployed worker as “unemployable.” ‘

But, doubting, but still loyal members of the Labour Party ask themselves, surely when this crisis is passed we shall get the benefits for which we supported the Labour Party at the elections? The chances are that before the present difficulties of English capitalism work themselves out the workers by working harder will work themselves all the more quickly into the sort of crisis with which they are more familiar—a crisis of “over production.” A crisis which will bring millions of unemployed and fill the markets of the world with a glut of goods which no one will buy. When this happened during the lifetime of the Labour government in 1929/31 they whined that they could do nothing—it was an “economic blizzard.” Today Attlee says “events are in control.” He is right—they are. In those two phrases the Labour Party leaders express their inability to administer capitalism for the workers. No leaders can do so. Events are always in control for those who have to administer capitalism. Capitalism sets the pace. Capitalism produces unemployment, insecurity and poverty for the worker. Capitalism produces war and the perpetual threat of war, which is just as unpleasant a future prospect for the workers even if Mr. Bevin is training an army so as not to let his constituents down as the Tories did in 1939.

Sack these blind leaders and work and organise in the Socialist Party for Socialism.