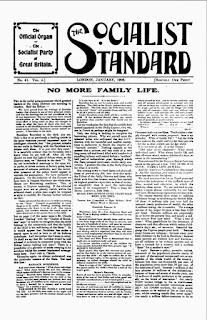 From the January 1908 issue of the Socialist Standard

Mr. Jas. Holmes, the “Labour” candidate, did his best to let folks know he was not a Socialist. He had never disguised the fact, he said.

And yet he was supported, not only by the I.L.P., which openly advocates such a course of action, but also by the S.D.F., which claims to be “uncompromisingly revolutionary.”

At the candidate’s meeting at the Beverley Road Baths on November 23rd, the chair was taken by Dr. J. Nelson, S.D.F.

Mr. Holmes’ election address was like any other Radical’s. He believes that the national ownership of our rail ways, the taxing of unearned increment, the abolition of royalties on our mineral wealth, the re-assessment of the land tax, the freeing of the land from monopoly together with leasehold enfranchisement, are “ the real remedies against poverty and unemployment."

“What Labour Leaders really think of the Liberal Party” was the frontispiece of a card issued by the Liberals. It contained the following five pars.


As Mr. Holmes, in some of his literature, even dropped "Labour” and asked the electors to "Vote for Holmes, the real Progressive," Mr. Wilson’s reference to the splitting of the Progressive vote was not out of place.