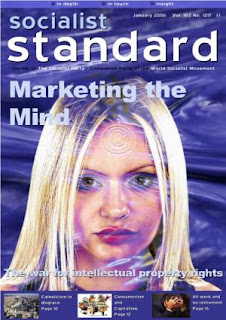 Editorial from the January 2006 issue of the Socialist Standard

Let 2005 rest then, as a monument. A gravestone for the 6 million children the Food and Agriculture Organisation estimates died in the hideous torture of starvation and starvation related disease that year. The FAO report, released on 22 November, also informs us that malnourishment also contributes to holding back educational attainment and brings about a cycle of poverty and death. This in a world where we are embarrassed by riches of food and farmers are paid to let fields fall fallow.

The figure 6 million is highly evocative – the same number as the usual estimate of Jews that were murdered in The Holocaust – possibly the most heinous act of mass murder in history as these millions were gunned down in pits or gassed in specially built camps for the extermination of a whole people. A crime of such infamy that its like has never been known and to this day in many parts of the world – as renowned liar David Irving is finding to his cost in Austria – it is considered a crime to deny that it happened.

What historians can and do dispute, though, is the extent to which The Holocaust was planned out in advance – whether Hitler always intended for the mass murder of Jews or whether slaughter grew out of local pragmatic responses to dealing with local populations in conquered territories. The so-called Intentionalist versus Functionalist accounts of The Holocaust.

The debate is complex – and probably irresolvable now. What is, perhaps, clear, is that the Functionalist case is somehow more horrifying. It would be comforting to human minds to know that a handful of monsters dreamed up and guided the mass-murder from their bunker – but it is more dreadful to conceive of low-level local officials going about their business : Item 5 – Merits of Gas over Bullets for extermination. Literally getting rid of some inconvenient people.

Perhaps, though, in future years, people will look back on the functionalist holocaust of our times – sit agog as they hear of committees sitting down to make policies knowing they will lead to millions of preventable human deaths because they can't, won't, daren't raise the lives of these people above holy private property, the sovereignty of nation states or even God.

The autogenicide of the human race is why 6 million must die each year and why 850 million must live undernourished.

We will be as equally deserving of opprobrium as those who stood by and let the Holocaust happen if we do not act as soon as we may to end this preventable waste. If we lend our voices or our votes to political parties that put trade, business, capital and property before the rational good of distribution according to needs, we are contributing as culpably as the lowliest corporal genocide.

We urgently need to build a worldwide movement to bring a speedy halt to the carnage. The easy thing – the functionalist thing – is to go on supporting parties that offer small, possiblist solutions within the current system. But the right thing to do, the necessary thing, is to demand the impossible and turn the whole system over. Let's make 2006 the monument to the beginning of the end of a murderous system.
Posted by Imposs1904 at 4:26 PM