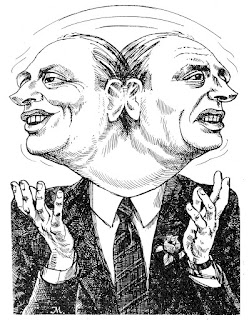 From the June 1991 issue of the Socialist Standard

Restless is hardly the word to describe members of the Labour Party as they contemplate Neil Kinnock's abandonment of the left-wing ideas which he professed in those far-off days when he was coming up through the ranks of the party. They are unlikely, however, to be consoled by one of our readers who thinks that they— and we—have got it wrong because Kinnock has not changed: he was never a left-winger in the first place. E. H. Evans, of Newport, Gwent, writes:

You keep on repeating that Neil Kinnock used to be a left-wing firebrand. Can you prove that? I knew Neil 30 years ago. In fact, he used to be my tutor in TU weekend schools in Porthcawl, and I never had the impression that he was a "leftwinger". Far from it; apart from the fact that he was a member of CND, he was always on the so-called "right" of the trade union and Labour movement. This so-called "left" myth is nothing but a Tory plot, supported by the media. How can a person be a leftwinger when he supports and admires Clem Attlee? Unless you can supply proof you'd better let this fairy tale rest.

So what are the facts? Was Kinnock a left-winger or is it all got up by the Tories and the media—and the Socialist Standard? To begin with, it is not unusual for left-wingers to admire Attlee for the huge programme of nationalisation and other measures his government pushed through. And, of course, Kinnock is also an admirer of Nye Bevan, who for much of his political life (until he too outraged his supporters on the left) was a left-wing scourge of the Attlee government. Kinnock contributed a foreward to a reprint of Bevan's book In Place of Fear in 1978. After you have hacked away the dense verbiage (not for nothing is Kinnock known as the Welsh windbag) this is revealed as an eulogy that condemns as "lame-brained and prejudiced" anyone unable to accept Bevan's proposition and practice.

Whatever E. H. Evans's experience of Kinnock in the 1960s it is clearly at odds with that of others, who knew Kinnock and worked with him, and with that of those who observed him later in his career. Eric Heffer in his book Labour's Future says that Kinnock "was known in the party as a man of the left who was a close personal friend of Michael Foot and much influenced by Nye Bevan". In his diaries covering 1977-80 (Conflict of Interests) Tony Benn records a Tribune Group meeting in January 1977 when "the whole left was there: Ian Mikardo was in the chair, Neil Kinnock, Dick Clements, Mark Sanders" and a party he threw at his home in 1979 "with about forty people of the left" who included Neil Kinnock.

Of those who observed him, David and Maurice Kogan in The Battle for the Labour Party say that "he has held left-wing views on most matters" and "talked in the language of the radical post-Bevan left". In The Tragedy of Labour Stephen Haseler describes the Labour Party NEC swinging "further to the left with the addition on it of Dennis Skinner, Neil Kinnock and Douglas Hoyle". Kenneth O. Morgan, in Labour People, says that by 1974 Kinnock "was a vocal advocate of the standard left wing position on nuclear weapons, the Common Market, public ownership, incomes policy, arms to South Africa, Chile, El Salvador and much else besides".

Capitalism "a failure"
What had Kinnock done to deserve such assessments, from people who are hardly Tories or media dupes? Although he has never been famous for outpourings of gems of political theory, Kinnock did put enough on record to establish his reputation as a left-winger. In an article on nationalisation in December 1974 in Labour Monthly he wrote, in a bitter criticism of the then Labour government and in particular its Treasury ministers:


The future of Britain is with socialist nationalisation and not with pensioner capitalism . . . British governments have fruitlessly been trying to bribe British capitalism for forty years. There is no need to be apologetic about the extension of public ownership or the establishment of workers' control. They are now prerequisites of the economic survival of Britain . . . there is no alternative in the capitalist system—it is a failure.

At the Labour NEC in October 1978 Kinnock proclaimed, in another attack on the policies being pursued by the Labour government, that "we should reflate, put money into health, go for the job-swap scheme, better housing, end stock relief for businesses". After the defeat of that government, in May 1979, Kinnock condemned it:


"For the third time the Labour Party had saved capitalism, and lost", Benn Diaries

Times Change
As late as October 1984, after he had been elected leader of the Labour Party, he was able to reassure the left with statements like "the short sighted, speculative market system . . . never will produce the plenty necessary to meet human need" (Marxism Today). Well times have changed because at the Labour Party conference in October 1988 Kinnock was telling his members of his intention to run the same market system which fails to satisfy human needs:


The fact is that the kind of economy that we are faced with is going to be a market economy. It will be the one that we have to deal with when we are elected. We have got to make it work better than the Tories make it work . . . Even after that has been the implemented programme of a Labour government for years, there will still be a market economy.

Times have changed, too, about nuclear arms because it is quite clear that if Kinnock ever becomes Prime Minister he will not arrange, in deference to his past membership of CND, for the immediate abandonment of British capitalism's nuclear arsenal.

Kinnock is not the first Leader of the Labour Party to tread the well-worn path from left-wing to right, even if in some cases in the past—such as Harold Wilson—the left-wing policies existed more by virtue of wishful thinking of a power-hungry party membership than in reality. For a Labour politician on the way up a reputation as a staunch left-winger has been almost essential as an apprenticeship. Kinnock, though, has been different in one respect; he has not waited to get into office before moving from left to right, but has carried this through while still in opposition—clearly he decided that if he did not make the move now this would stay that way.

Winning political power to run capitalism, which is the aim of the Labour Party, has to be a process of deceit. How else could they justify their present policies and presentation, which are in opposition to what they have claimed to stand for in the past? Running British capitalism is not a job for anyone who is encumbered by the embarrassments of what they had to do and say in order to get to the top. This is a harsh system which must operate against the interests of the people who vote the leaders into power. If Kinnock ever makes it to Number Ten, and settles down to run his bit of the market economy and the British nuclear forces, he will enrage his followers. But he will always be able to argue that when they voted for him they knew what they were letting themselves in for.