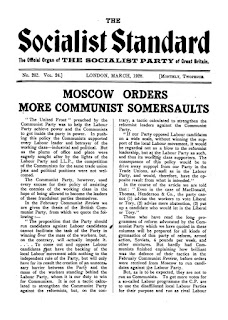 Editorial from the March 1928 issue of the Socialist Standard

The Report of the Liberal Party Industrial Enquiry has at last appeared, but it should be called “The Capitalists White-Washing Programme." From beginning to end it calls attention to bad conditions, but never once does it enquire into the cause. The remedy proposed is more of the conditions that caused the evils. More Capitalism. Empire Development of—Capitalism. More shareholders in—Capitalism. More Free Trade in goods—and labour power. Less taxes for the industrial lord. Cheaper coal. More roads, and similar pills for the Economic Earthquake.

The dependence of the working class upon the employers for a chance to work; the resulting exploitation and insecurity of work, together with actual unemployment all the time under Capitalism—this situation is not dealt with by these Liberal experts. All these quack doctors can suggest is the workers should buy shares where they work and get a share of the profits in large concerns, and when jobless they can work on the roads or in the forests — developing capital for the capitalists. They tell us that ownership is far too concentrated, and while they report thus, the Liberal capitalists, like their Tory friends, are busy amalgamating, centralising, combining and trustifying modern capital in more powerful concerns, whether like Sir Ernest Benn in the publishing world, or like the Brunners in the chemical industry.

The Labour Party are angry because the Liberals have pinched their policy and put it in the Liberal Report. The MacDonalds and Hendersons say the Report embraces much of Socialism, but any Socialist who looks into the Report to find the Socialism will wear his eyes out in vain. What the Labour leaders mean by Socialism is municipal trams and beer and such schemes, to run things by a Capitalist State when it pays better than ordinary capitalist ownership.

The Labour Party’s programme is proved to be a capitalist one by its adoption by Liberals.