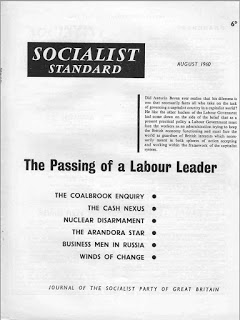 
Many, many times, the Socialist Party has been asked to join in support of movement for national independence. Our reply in refusing to do so has always been that not only would such support result in our being side-tracked from our work of Socialist propaganda but that the aims and results of these nationalist movements at best were concerned with pushing forward the local and nascent ruling interests and at worst could be and usually were actively anti-working class. We have not been afraid to point out, too, that these movements which spoke so much of “freedom," “independence,” “liberty,” etc., were they to come to power and were they to find unwelcome opposition or criticism, would not hesitate to act in the same despotic and dictatorial manner against which they were the erstwhile protestors.

A recent case which supports this view is the recently established Congo State. Mr. Lumumba, the new Prime Minister, though new, is learning fast. He is determined to see that the new local capitalist interests are defended at all costs, even if it means getting the same soldiers, who did yeoman duty for the Belgian rulers, to do the same, job for him, as the following quotation from The Times (29/6/60) serves to illustrate:

Mr. Lumumba gives warning . . . that he has decided to adopt all necessary measures for order to be respected and that these measures will be taken without weakness.

By the side of this article we can see what this means—black soldiers threatening black demonstrators with their rifles. Is this the freedom our opponents would want us to give up our Socialist work for?
Max Judd
Posted by Imposs1904 at 6:05 PM