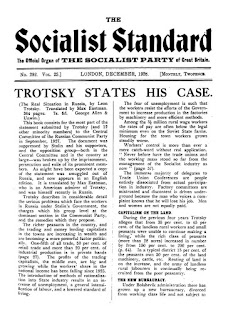 From the December 1928 issue of the Socialist Standard

One of the inevitable drawbacks of broadcasting is that you cannot answer back. It is inevitable, or rather unavoidable, for the reason that heckling or questioning from an audience, possibly of millions, presents obvious difficulties. Of course, the absence of this possibility should make no difference to a lecturer with any conscience or honesty, but to politicians, and on certain occasions —such as the General Strike—this feature is a god-send. Here is a theme for a valuable digression on why broadcasting is a Government monopoly. But not to labour a separate point and to get to the matter in hand, I was listening to Miss Sackville-West the other evening lecturing on “Modern English Poetry.” Very charming, very entertaining, but marred at the very outset by a slight inaccuracy. It is a pity when one sits down to be charmed, that one should get a half-brick in the ear for a start, but so it was. Miss Sackville-West asked us to commence what she called the Georgian period with 1900. She gave as her reasons for choosing that year as a starting point, “ the South African War is over, the world is at peace, we are surrounded by the large air of material prosperity.   .   .   .” Now that is where one gets the nasty jar. I happen to have been alive, and taking keen notice of my surroundings in the year 1900.

“ The large air of material prosperity." I like that! One remembers it so well. Only twenty-eight years ago, and it comes back like a beautiful dream. Speaking from memory, according to a tract issued about that time, the average wage of the working class was about 25s. per week, and one worker in every three died either in the workhouse, hospital, or lunatic asylum. The twelve-hour day was normal in scores of industries. And the unemployed! There is a touchstone for the large air of material prosperity. Who that is old enough does not remember the shabby processions of half-desperate men chanting their grubby war-cry, “We want work”? For how many years were not all efforts to get what was called a living wage fobbed off with the plea that “things were always like this after a war"? According to the official figures for December, 1902, before the Insurance Acts had made greater accuracy possible, there were half a million men out of work. Among other disturbances, the Town Council of Croydon was stormed by the unemployed.

So that you see how a charming lecture on poetry can become the vehicle of a patent inaccuracy. Probably the hundreds of thousands of other listeners will have allowed the phrase to pass uninterruptedly in at one ear and out at the other, and little harm done, but it is worth retrieving from oblivion for several reasons. For one thing, it is interesting to note and dwell upon the fact that one has lived during a period to which the term "prosperity” is applied. Up till now, during my short lifetime, no one has ever discovered prosperity in the present tense. Years ago, or years ahead, yes ! To-day, never ! A case of jam yesterday, and jam to-morrow, but never jam to-day. At the moment, politicians call upon the unreflecting to consider the happy state of things "before the War,” and propose, if you favour them with your votes, to lead you "back to prosperity.” This happy phenomenon has the objectionable habit of disappearing as soon as you look at it. It is afflicted with a kind of polarity, which makes the people of England gaze longingly at the prosperity of America and the Colonies. And the colonists doubtless speak of the prosperity of the Old Country, whilst America is big enough to let the population on one side envy the prosperity they read about on the other.

There is a further reason why Miss Sackville-West’s gem of polished piffle should not sink unhonoured and unnoted into the pool of forgotten things. It indicates a certain definite attitude of mind the working class in general, and the unemployed in particular, would do well to note. To that view, the problem of worklessness is nearly related to worthlessness, and is a problem quite minor and marginal. The unemployed exist as a sort of untidy fringe on the outside edge of the working class, and are best fobbed off with doles and forgotten. In a word, they are normal. That is the view, and it is a dangerous one. The Daily News (July 24th) has already told the world "there are 200,000 mine workers definitely and irrecoverably surplus to the industry.” A writer in the Evening Standard of November 13th, A. A. B., speaking of present unemployment, made the following pregnant observations: "There were nearly a million unemployed in 1908, and the other two or three hundred thousand are accounted for by the women imported into the labour market since the War, and the miners. Allowing for the increase of population and the surplus colliers, the aggregate amount of unemployment is normal.”

There it is in a nut-shell. Unemployment. whether half a million in 1903, one million in 1908, or one and a half million in 1928, is normal, under Capitalism. In a few months’ time you will have an opportunity of voting for the continuance of Capitalism. Some of those who will appear before you will call themselves Tories or Unionists, others Liberals, and others again Labour men. Rest assured, all, if elected, will carry on Capitalism, with colossal unemployment as its normal condition. If you do not desire to continue to live under Capitalism you have but one single, simple alternative. You must read our pamphlet on Socialism, the cheapest piece of literature in existence, 48 pages for twopence. If you agree with it, you must join with us in the only party that is aiming at the abolition of Capitalism and the substitution of Socialism. In politics there are but two parties, and two only. The Capitalist Party, with Tory, Liberal or Labour labels, and the Socialist. Party, which needs no label.
W. T. Hopley
Posted by Imposs1904 at 12:49 PM