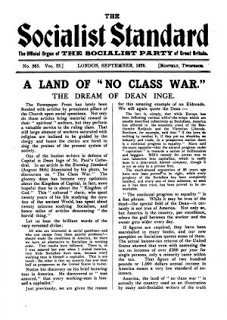 From the September 1926 issue of the Socialist Standard

Travellers in the wilds assure us that a man lost therein without knowledge of woodcraft or special means of ascertaining his position will find himself wandering in. a circle; the word circle is understood in a rather wide sense, the point being that the lost man arrives eventually at his starting point.


The planets likewise move in orbits, and a similar form would appear to characterise all blind, unconscious movements, political ones included. Thus, that outstanding phenomena of modern times, the "Labour” movement, presents almost innumerable instances of parties or sects, returning, after prolonged journeyings in the labyrinth of confusion, to the place of departure.

Take as an example the case of the I.L.P. We have heard a lot from that quarter recently about "Socialism in our time!” Does not this call to mind the early days of that body over thirty years ago? According to its leading lights then, the Social Democratic Federation of the time was not practical and did not present actual living issues to the masses. It was absorbed in revolutionary theorising to the exclusion of a definite line of action. The I.L.P. was going to change all that. It was going to bring Socialism into actual being.

It went about the business by seeking the support of the Trade Unions for candidates run on a programme of reform such as nationalisation of various industries with a living wage for all. So far as getting their candidates elected goes, the I.L.P. have been undoubtedly successful. The Trade Unions have found the money, and the I.L.P. found the men. Over a hundred of the Labour M.P.’s are drawn from its ranks. Yet even on the threshold of political success, with a parliamentary majority at no very distant date dazzling its eyes, disillusion creeps into its ranks.

The experiment in "Labour” Government, carried on with the connivance of the avowed capitalist parties, showed quite a number of the rank and file of the I.L.P. that, so far from leading to Socialism, their leaders had precious little time for even the I.L.P.'s reformists nostrums. Hence these nostrums are trotted out and restated with all the vigour and fervour of fanaticism just as though a new discovery had been made. We have the "practical” I.L.P. once more trying to find a comfortable half-way house between the capitalist Liberalism of its leaders and the vague, sentimental yearnings of its followers for “Socialism.”

No fundamental change in the object and policy of the I.L.P., however, is dreamt of. The simple fact that Socialism can only be established by a Socialist working-class is ignored. The leaders are criticised not because they are leaders, but because, in the eyes of their followers, they are not "good” leaders. The bewildered following look around for other leaders, but do not realise that similar results must follow. All leaders are "good” (i.e., make extravagant promises) so long as they are still on the climb. Their intentions may be benevolent or merely ambitious, but in the long run their actions are determined by the conditions of their existence. These conditions are: capitalist society, and a blind following, which, though dissatisfied therewith, does not understand how to overthrow it.

The policy of capturing the machinery of the Trade Unions while ignoring the necessity for Socialist education of the rank and file of the workers, has led, and can lead, to nothing more than the elevation of a series of "leaders” to office and favour with the master-class. If working-class history is any guide, it is only a matter of time before each little group of "leaders,” as it arises, follows its predecessor along the path to "responsibility” (to the capitalist class) and practical inability to reduce Utopia to a working formula.

A knowledge of the economic laws of capitalist development would prevent the workers indulging in day-dreams about "a living wage,” and would impel them to organise for the abolition of the wages system. The absurdity of attempts at compromise on this point was glaringly exemplified by the "Labour” representatives before the Coal Commission. These champions of nationalisation put forward elaborately worked-out schemes, only to be driven to admit that these same schemes would not solve the "wages-problem” with which the Commission was confronted. In short, the workers have nothing to look forward to under capitalism but intensified exploitation and insecurity.

As Socialists, we are not concerned with the dilemma raised at the I.L.P. Conference by the suggestion that industries not paying a "living wage” should be nationalised first. According to McDonald, this implied the taking-over of bankrupt industries first! The delegates forthwith became involved in a conflict between their devotion to their "ideals” and the necessity of being “practical,” i.e., making a State concern show a profit. It is sufficient to show, however, the essentially capitalist outlook of the I.L.P. As Socialists, we advocate the conversion into common property of all industrial undertakings which are indispensable for the provision of the wants of the workers, and we see no reason why the workers are obliged to pick and choose, in a piecemeal manner, the industries to be dealt with. That process is only necessary to the "Labour” politicians who know that they have no mandate for Socialism, and are thus obliged to frame a programme which will suit the interests of some section or other of the capitalist class.

The I.L.P. has climbed to influence by angling for Liberal votes. Having got them its representatives are necessarily bound to come to terms with the master-class. Any attempt to introduce Socialism with a non-Socialist electorate is foredoomed to failure, and it is only the dupes of the "Left Wing ” that imagine otherwise.

The Communist Party are another bunch who move in circles, and seem proud of it. Twenty years ago, the Social Democratic Party catered for those who delight in combining reformist action with revolutionary phraseology. Then, as now, there were not lacking short-sighted members of the working-class who imagined that they could rally their class round a programme of "immediate demands ”; they never knew quite what to do as a body at election time, but were usually to be found supporting “progressives” of all shades. The S.D.P. became the B.S.P., from which, after the war, the Communist Party sprang. We have witnessed a diverting exhibition of political hysteria on the part of this body, followed by an equally amusing volte face before the cold douche of experience. Now they are back again once more on the old familiar ground of "immediate demands,” plus support of the Labour Party. The "Communist” of to-day is but the Social Democrat of twenty years ago, under another name.

The Socialist Party was formed with a definite revolutionary objective expressed in unswerving tactics. The scientific method as applied by Marx and Engels has been its guide. Hence for us there has been no wandering in circles; no futile attempts to advance before we have accumulated the army for the attack. That we are satisfied with our rate of progress we do not, for one moment, pretend; but we have at least the satisfaction of knowing that if the workers exhibit the signs of confusion, it is not due to our propaganda.

That, at any rate, has been clear and definite. When the workers learn to see in Socialism their only hope, when they realise that it can only be gained by their own efforts in the teeth of the opposition of their masters, then we know that they will march forward as one body, blundering neither to right or left, till their emancipation is achieved.
Eric Boden
Posted by Imposs1904 at 10:34 PM