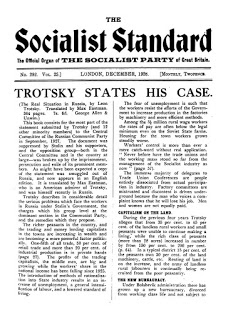 From the December 1928 issue of the Socialist Standard

“There is no such thing as the capitalist system!” exclaimed a public speaker in the hearing of the present writer recently. “A system (such as the solar system, for example) implies law—fixed, rigid, unalterable, tyrannic; but to-day you have infinite variation in exchange, with currency conditions in a state of chaos. No, there is certainly not a capitalist system.”

This method of trying to combat Socialist propaganda is not original, and it is difficult to imagine any fairly well-informed opponent using it; but, knowing that the workers are seldom well-informed on matters outside their jobs, many champions of capitalism seem inclined to convey the impression that the Socialist is attacking a phantom of his imagination. In case any of our readers take them seriously, let us examine their case.

In the first place, it is not true that the solar system is “fixed and unalterable.” It is in constant motion, radiating energy into space and thus altering its own composition. If astronomers are any guide, it had an origin and must have some end. Its lengthy existence (judged by human standards) does not alter the fact that it is a product of evolution.

Being composed of definite quantities of matter, its motions can be measured and expressed in the form of laws, and the same is true of other parts of the universe, including human society.

The prices of goods, for example (upon which we depend for our existence to-day), are regulated by economic forces, no matter what the variations in those prices may be. If a shopkeeper marks his goods too high, he is left with them on his hands; should he sell at too low a figure, he will not clear his expenses. In either case he will fail to realise a profit and will find himself on the way to the Bankruptcy Court. But what determines the figure at which he should sell?

The basic factor is the value of the goods, which is the expression of the amount of socially necessary labour embodied in them. Other factors are supply and demand. Sometimes the conditions will favour the seller and prices will tend to rise; at other times the reverse will obtain; but always there is the compelling force of competition, on one side or the other, or both simultaneously.

The effect of this force is felt most keenly by the workers. They have but one commodity to sell, that is, their power to labour. The value of this power, embodied in their brains, nerves, muscles, etc., depends upon the value of the necessary elements of their subsistence. The cost of the food, clothing, and shelter, etc., that the worker must have in order to go on working are reflected in the wages that they receive. In the long run and on the average, they cannot accept less without causing their energy to deteriorate and become unsaleable. They cannot get more, because there are machines on the one hand and unemployed workers on the other ready to take their places.

With the workers, the existence of economic law is not a matter of speculative theory; it is a painful, everyday experience. If there were no economic forces operating according to some discoverable law, nothing could prevent the workers claiming what wages they fancied, and the same would apply to the capitalists in fixing their prices. Nothing would be determined; all would be chaos; but human beings cannot exist on chaos and such a state is simply inconceivable.

At first sight, the realm of exchange presents an appearance of anarchy. The fluctuations of prices, including wages, are occasionally so violent that they seem capricious to the superficial observer.

In the same way, superstitious sailors, even today, attribute storms to spirits, etc., but for every wave there is a corresponding depression and the general level of the ocean remains unchanged. So with the world market. The rise in prices at one time encourages greater production till the market is glutted; then, with the consequent fall in prices, the less economically conducted concerns go out of business. Always there is going on a ruthless, blind, automatic selection of the fittest types of machinery and organisation for the production of the wealth, with the result that the social powers of production are greater today than ever before in human history.

How are these powers controlled? They are in private hands, in spite of their social character. Consequently, they are only set into operation for the production of private profit. There is no organised social plan. Competition asserts itself at every turn. Even the narrowing of the circle by the concentration of capital, the forming of world trusts, international combines, etc., only makes the struggle fiercer.


The larger the output, the greater the importance of minute economies; yet the conflict in the market is as nought compared with that in the factory. If the capitalist is an anarchist in the realm of exchange, he is a despot in that of production, which is carried on amid the smouldering revolt of wage-slaves needing but little to fan it into open flame; but this revolt, again, is for the most part blind. It is only against the effects of the system, because the workers have not yet learnt to understand the cause, i.e., the system itself.

Hence their efforts at improvement take the form of demands for higher wages and shorter hours, valuable enough if other things remained the same. Capitalism, however, constantly develops a greater power of exploitation. No programme of reforms can alter that. The workers cannot interrupt the development of industry; they can only take advantage of it by obtaining control of it through the common ownership of the productive forces themselves; but that would be Socialism—and “the end of all things.” That at least is what those who pretend that “there is no capitalist system" would like us to believe.
Eric Boden
Posted by Imposs1904 at 4:59 PM