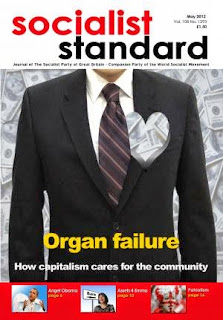 From the May 2012 issue of the Socialist Standard


Care is a fairly unambiguous word: to look after, to feel affection, and concern for somebody or something. A recent inquiry by the Scottish Parliament into care begins with the opening statement: ‘One test of the morality of a society is how it treats its elderly’. How do you determine morality in a society that has seen ruling class consent to brutal dictatorships and the mass slaughter and starvation of millions upon millions of our fellow human beings?

Ours is a long history. In ancient societies the elderly were the chief sources of knowledge: Where was the best hunting to be found? What plants cured what sickness? How to make the tools to enable the tribe’s survival. This led to various forms of Ancestor Worship. In China the practice of veneration for the wisdom of the elders dates back long before 1000 BC. And in Polynesian societies, the outlook is one of reverence for the elderly and the expectation of help and guidance; although it doesn’t involve worship.

As workers were turned off of the land pauperism became endemic for those unable to work hard enough to support themselves. From 1601, the Poor Law was enacted and each parish became liable to care for the ‘deserving’ destitute. The elderly were deemed ‘deserving’. Care was as diverse as the whims of those that administered it. For a few, care consisted of paying a family member to look after an elderly or female pauper in their own home. For the majority, care amounted to begging from the moralising rich to stay out of the gutter.

By 1834 The Poor Law was radically amended. And many elderly workers were consigned to the intentionally austere and punitive workhouses. By 1885 free Poor Law healthcare became available in some parishes, and in some boroughs free hospitals were built. Why? Because, finally a light had gone on in the darkness of the collective capitalist brain that sickness amongst the poor reduced their capacity for work. As an afterthought, and out of piety, a 1900 Poor Law directive allowed for less punitive workhouse conditions for the elderly: elderly couples could now share a room together, and single elderly paupers were given separate accommodation from younger paupers.

As capitalist society advanced so too did bourgeois ideology—the cloak that conceals the realities of life. Care for the elderly was set to become a central issue in the war of ideas. In the UK the hub was the welfare state. We are told that after the 1906 General Election the British Liberal Party enacted certain social reforms that led to the birth of the modern welfare state. It is argued that New Liberals, and Lloyd George in particular, overturned the earlier ideology linked to Gladstone that the population should trust its fate to the market and the ‘invisible hand’ that was at the tiller. Or in other words: work or starve.

During the Boer War of 1899-1902, the ruling class discovered that more than one third of those who volunteered to fight were medically unfit to defend their profits. Sickness amongst the remaining workers was also hindering the accumulation of profits, and thus competitors like Germany were gaining an edge. This tricky climate for British capitalists led to an opportunity for a handful of reformers, notably the Fabians. They believed that the process of reforming capitalism by degrees in order to achieve socialism was more likely to succeed than the revolutionary means. In a changing environment they managed to push through a few reforms that restrained the old laissez-faire ideas and paved the way for the advent of the welfare state. Amongst the reforms were free medical checks for schoolchildren, and the provision of pensions for workers over 70 whose income was below £21 per year.

What seemed to many workers like pennies from heaven was in fact a relocation of a portion of the profits from the capitalist class’s pockets back to those that had originally created them. Even the dullest of capitalists realises that you don’t strangle the goose that lays the golden eggs.

However the ruling class has a maxim – not a penny more. By the 1960s several surveys discovered that hospitals and Homes for the elderly were in a ‘deplorable condition’. Bourgeois sensibilities were offended, and a new idea arose: Community Care. Bourgeois ideologists busied themselves with the new concept. Reformers devised clauses and sub-sections. Rarely was it mentioned that community care was the cheapest option, a somewhat important concern as expenditure spiralled.

Community care went into warp drive in the 80s under the tutelage of the good housekeeping and parsimony of Maggie Thatcher. The 1989 White Paper, Caring for People, reaffirmed the importance of cost when it stated: ‘The Government will expect local authorities to make use whenever possible of services from voluntary, ‘not for profit’ and private providers insofar as this represents a cost effective care choice’. Thus capitalist profits were being protected, whilst new avenues of profit were to be explored.

Unsurprisingly the local authorities found it increasingly difficult with the available funding to provide a decent level of care. Thus, as the story goes, the private sector stepped in to lend a hand. In 1975 there were just 18,800 private sector residential homes. By 1990, 119,900 had rushed forward to offer support. God bless the entrepreneur, sang the ideologists.

Another ruse that gave impetus to the expansion of the private sector home was that from 1980 means-tested board and lodging supplementary benefits became available to independent care operators where once only local authority, public funded, voluntary sector homes received those benefits. During the ‘90s I worked part time at a residential home where 90 percent of the residents were receiving means-tested board and lodgings.

I was the cook for two days a week for over seven years. Virtually all of the residents during that period were in various stages of senility, dementia, or Alzheimer’s. It was patently obvious why so many ‘entrepreneurs’ had moved into residential care – there was a lot of money to be made by those who knew how. In the home where I worked, costs were under a very tight rein. From the dilution of washing up liquid, to the barest minimum of staffing levels. No stone that led to an extra pound in the owners’ purse and wallet was left unturned.

The regime began at 7am. There were usually 32 residents in our home, and it was the task of two night staff to get them up and toileted for breakfast by eight. After breakfast the ‘liquid cosh’ was administered to the disruptive ones, and the remainder were removed to one or other of two day rooms and left with a television blaring till lunchtime. Lunch was at 12, then back to the dayroom and the TV until tea at 5. More TV and then bed by 8pm. The only respite from this was once a week, when a man came and played the piano for one hour. There was meant to be a weekly outing for eight residents in the minivan. The residents would sit, dressed and expectant, often up to two hours before they were due to leave. However the outings were frequently ditched because the owner, who was also building up a mini-empire of bedsits for people on benefits, needed the van to transport building materials.

Their final years spent in this home for Tommy, Maisie, and Rose and so many more that I cooked for were utterly miserable. If it wasn’t for the often unpaid efforts of some of the staff, then their lives would not have been much better than the workhouse paupers of a century before. The owners went on to buy another far bigger, and grander Home, and to own numerous houses and flats in that area. Care had obviously benefitted them.

My observations are not isolated, and matters have not improved. In a recent article (Telegraph, 19 March) Professor Finbarr Martin, president of the Geriatrics Society, had this to say: ‘The issue is that there is a negative about people in care homes. There is a nihilism about care homes that is completely unreasonable and unjustified.’ Richard Lloyd, executive director of Which?, said: ‘The government can no longer claim to be shocked as report after report highlights the pitiful state of care for older people.’ Michelle Mitchell, of Age UK, commented: ‘the system was putting the health and dignity of older people at risk.’ I could fill a further page with quote after quote, from people high and low, about the appalling care for the elderly under capitalism today. But I don’t believe that I have to do that. You already know. You also understand the true meaning of care. Don’t you?

The question then becomes simple. What are you willing to do about it? Campaign for futile reforms? Or join us and help to build a new society where young and old can live out their lives with respect and real dignity in a world where the true meaning of community – from each according to ability, to each according to need – can become a reality rather than the fantasy it is under capitalism?