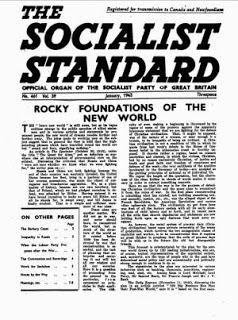 From the January 1943 issue of the Socialist Standard

There is much in the saying, one thing leads to another. When Wellington’s military alliance knocked out Napoleon they ended one thing and laid the foundations of another. French capitalism, new and vigorously youthful, lost for all time it’s hope of becoming the dominant power in Europe. Being young and healthy, it soon recovered from its fall and set out to become a colonial power with an Empire outside Europe in place of the once dreamed of one inside Europe. It was now a question of where? Capitalism always seeks to advance its expansion as cheaply and with as little conflict as possible. French capitalism had to take into account the wisdom of not muscling in on any other powerful capitalist power's preserves. In addition to this, her Napoleonic venture had left her weak and in consequence the founding of an Empire must not put too big a strain on her resources in man power or money. This meant grabbing territory within striking distance without dangerous opposition from other powers. All the fore-mentioned factors favoured her in one part only—the tip of North Africa, which was accessible from her Southern ports (Marseilles, etc.), and where the only opposition that could come (Spain or Italy) did not count. At this period the whole of North Africa, from Tangier to Egypt, was "nominally" part of the Turkish (Ottoman) Empire.

In Morocco, Algeria and Tunisia there was a limited form of "independence" under Turkish appointed vassal rulers (Beys), but conquest would not entail much trouble in this ramshackle Empire. For a couple of centuries this coast had been the regular haunt of the Arab slaver and Moorish pirate, and Christian Europe found no cause for its suppression; in fact, they joined in the merry game and shared the spoils, building the city of Bristol out of the profits. When capitalism, however, chooses to make a move it can always find a good slogan. One time it is “freedom of the seas," another time it is "democracy," and this time the slogan suited to French capitalism was the “suppression of piracy."

In the early years of the nineteenth century there lived in Algeria a firm of financiers—Bacri. This firm lent money to Europeans just as Europeans lent money to them. During the Napoleonic wars the French Government borrowed large sums of money from the Bacri firm to pay for the army's supplies in Africa. When the wars ended the money was not repaid, and the debt owed by a “civilised" government to an "uncivilised" financier was allowed to lie in cold storage. It was the custom in later times for European States to see that Europeans got any money they lent repaid to them by threats of force. The Bey of Algeria (Hussein), as ruler of his country, tried to do the same on behalf of one of his firms. Repeated evasions of the subject by the French Government so exasperated this tin-pot ruler that he struck the French Consul in the face. That settled it! That smack not only cost him the 13,000,000 francs owing, but his kingdom as well.

The French capitalists now had two slogans to work upon : (1) The suppression of piracy; (2) their “National honour". How swiftly they discovered their "honour" except when it came to paying their debts! In a memorandum read to the Council of the King (Charles X) reference was made by the Minister of War, De-Tonnere to "all the advantages France might derive from the conquest of a fertile country whose mountains contained mines." The projected seizure of Algeria led to a lot of hot air on the part of Wellington, Lord Aberdeen, etc. The Times of May 23, 1830, remarked as follows: "The French Government cannot seriously think of forming colonies on the coast of Africa, for a war would break out between France and England." This was followed by an ultimatum from the British Government; however, on May 25, 1830, the French army sailed from Toulon. Algeria was conquered. The English Press yelled for blood, the Balance of Power was upset, the status quo disturbed, the French King driven from his throne, and—retired to England! (Some 90 years later the Kaiser settled in Holland after they were going to hang him.) French capitalism was now on the march; she had acquired her first colony in Africa.

The acquisition of Tunis (1881) was the next point of penetration in the Imperialist programme of French capitalism. The seizure of Algeria now brought colonial France to the border of Tunis—a Moslem kingdom, and therefore ripe for conversion. Tunisia is very rich in phosphates, iron-ore, copper, lead and mercury, and these were also ripe for conversion. In 1857 Tunis was ruled by a Bey— Muhammed. According to these Moslems blasphemy and adultery is punishable by death. In the sixties a young Italian was convicted of adultery with a Moslem woman. The woman was thrown into a lake, and the Italian executed. Here was the excuse! Under pressure from the European Powers the Bey signed a declaration of "rights" for Jews and Christians. French capitalism obtained concessions in the form of (1) Control of all telegraphic services; (2) The reconstruction of aqueducts and supplying of water. British capitalism obtained the "right" to construct a railway from Tunis to Goleta.

There now descended on Tunis a storm of traders, financiers and speculators from Europe. They lent money to the Bey on ruinous terms. In payment of interest they extorted further concessions for opening up unexploited mines. Under threats the Bey made the concessions exempt from taxation. An era of rapacity set in for the speculators, money-lenders, and joint stock companies of Paris, London and Rome. To do this the Tunisian peasant and craftsman was bled white. Hunger, misery and starvation led to numerous revolts, all brutally suppressed. About this time France had to face the opposition of Italy, now a fully-fledged capitalist power geographically nearer to Tunis.


At the beginning of the eighties France had become financially interested in Egypt and the Suez Canal. Smashed in the Franco-Prussian war the loss of her rich Alsace and Lorraine iron and coal compelled her to seek elsewhere for them. Now firmly settled in Algeria she sought to extend eastward. Bismarck said at the Congress of Berlin (1878), "England should let Russia have Constantinople and should take Egypt in return. France might be given Syria or Tunis." All nicely arranged! Britain agreed that France should have Tunis as long as she was blind when Britain took Cyprus. One good turn deserves another. Using as an excuse a petty raiding border tribe, France in 1881 invaded the province and forced a "protectorate” on the Bey, disclaiming all attempts at annexation, but has been there ever since. As one thing leads to another, this was the decisive factor which forced Italy into the Austro-German alliance until the war of 1914-18. Italy, through the medium of her Blackshirt shouters, still calls in slogan form for Nice, Savoy and Tunis. Not Rome or Carthage, but Rome—Paris—or New York. Not negro slaves this time, but the exploitation of wage-slaves and the seizing of mineral resources from the land where Carthage ruled.

That's January 1943 issue of the Standard in the can.