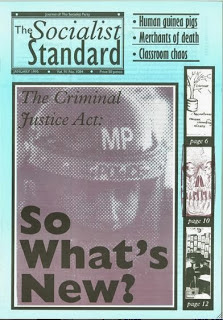 Tory duplicity
John Maples is the deputy chairman of the Conservative Party. Part of his duties consists in keeping the Prime Minister informed about the party’s reputation with the electorate. Towards this end he sent a memorandum to John Major with all sorts of suggestions on how to manipulate the media and con the electorate. Nothing unusual in that, but unfortunately the media got a hold of the document.

In a refreshingly honest report Mr Maples, a former Treasury minister, blew the gaff on all that Tory electioneering nonsense.


"Although in the eighties the Conservatives seemed to promise a classless society of opportunity, the reality is now that the rich are getting richer on the backs of the rest, who are getting poorer. " (Guardian, 22 November)

This will hardly come as a startling revelation to Mr Major or, for that matter, readers of the Socialist Standard.


Size does matter
The news that the Halifax and Leeds building societies plan to merge and become a bank has probably, as one newspaper put it,“sounded the death knell of the building society movement”.

Mutual societies have been losing market share of mortgage lending to the banks — down last year from 63 percent to 58 percent, and they blame this on the Building Societies Act which restricts their access to the wholesale money market and to providing other financial services.

If the merger goes through then the new bank will be able to compete with “the Big Four” banks and expand into selling unit trusts, pensions, etc. Roger Boyes of the Leeds regretted that the Leeds would no longer be a mutual society but added:


“The mutual movement has been getting smaller and smaller, and businesses which don't grow are left to wither on the vine" (Guardian, 26 November).

What do the dreamers of the “small is beautiful” variety have to say to that?


Kids and capitalism
The charity organisation Save The Children, which has been in existence for 75 years, has published a report showing how children have fared throughout the world in the last ten years. It makes sorry reading.


“Other chilling factors in this report are — 4 million children have been disabled, maimed, blinded or brain damaged in war — 12 million have lost their homes — 1 million have been separated from their families (The Herald, 17 November).

And what does this charity propose be done about these horrors?


“The report was launched by Terry Waite, the former Beirut hostage, who called for the banning of devastating landmines, a halt to international arms trade and more diplomacy to head off conflict."

After 75 years they still cannot see that capitalism leads to war. How many more kids must suffer before we call a halt to capitalism's carnage?


Civilisation?
We have been sent an interesting article about computer games in the Guardian's “Online” supplement (6 October) in which Jack Schofield claims that “for the past three years, Civilisation has been widely regarded as the world’s greatest computer game”.

Apparently, this game “. . . covers the great sweep of history; you start with a single settler in 6000 BC and end up taking a spaceship to the stars”.

Sounds fun? Alas, Schofield says it “has problems” because:


“People have tried to play it in a friendly fashion, co-operating with rival civilisations for the general good. This doesn't work. The way to win is to wipe out rivals as quickly as possible, saving only one enemy city to avoid ending the game. The more aggressively you play, the better the results."

The games people play and watch in capitalism will inevitably reflect the society in which they live, so the games are almost always competitive and adversarial with the emphasis on defeating opponents. This applies to football, rugby, boxing, etc., and computer games are no exception.


Clueless in Gaza
Last April we dealt on this page with an ITV news item which showed the new police force in the soon-to-be-independent Palestine being trained in the use of clubs. We said:


“Seems the Palestinian freedom fighters, like those in many other countries, are going to learn what they have been fighting for. No doubt they will be filled with patriotic pride at the thought of being attacked by a club-wielding Palestinian cop rather than an Israeli thug. ”

The truth of this was shown by the recent killing of 14 demonstrators in Gaza by the Palestinian police. Instead of facing the might of the Israeli state those “freedom fighters” now face that of Yasser Arafat's PLO state. National independence makes such a difference, doesn’t it?


Some horse sense
In the days before the tractor, horses used to pull ploughs. Young horses were fed oats and had the best of veterinary care. When they became old they stopped work and young horses were put in the shafts. The old horses were sold to the glue factory.

The young horses didn't know about this.

Inside modern capitalism young workers are taught in schools, colleges and universities to work. They are given medical care and every Friday are given a lump of sugar.

When they grow old they are replaced by young workers. They are given a gold watch and allowed to die slowly from neglect and poverty.

Young workers should know about this.