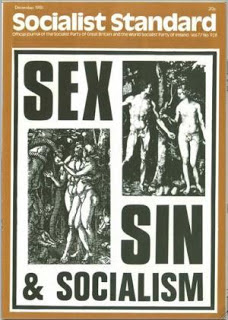 From the December 1981 issue of the Socialist Standard

Do you remember The Joy of Sex? — a best-selling book published a few years ago that aimed to tell people how to get the most out of their sex lives, on the assumption that they didn’t and would pay to find out how to. The assumption seems to have been correct. People did pay so much so that The Joy of Sex was quickly followed by More Joy of Sex.

What’s doubtful, however, is that many people’s sex lives improved after reading these books. In fact most must have come away feeling more joyless than ever, with sexual fulfilment still way out of their reach. Most resigned themselves to regarding sex as a bind, a symbol of failure, a source of fear, frustration or disappointment.

Anyone who doubts that sex is one or more of these things for many people need only look at the amount of problem solving literature about sex on bookshop shelves, the deluge of articles on sex in newspapers and magazines; and most people’s morbid curiosity, profitably exploited by the media, about how others “do it”. Further evidence is the number of people actively seeking help with their sex lives through channels ranging from agony columns and marriage counsellors to group therapy, yoga and ginseng aphrodisiacs.

The emotional turmoil that goes hand in hand with failed sexual relations can often be seen in the divorce rate, wife-battering and the popularity of vicarious sex through pornography. From America the recent Hite Report on Male Sexuality gives a picture of gargantuan sexual frustration and mixed-up emotions among both sexes as well as of immense difficulty experienced by men and women in communicating their feelings and problems to one another.

Why should a natural human function like sex be such a problem for so many people? Why is emotional and sexual harmony among partners so rare? Is it all part of being human? Or is it caused by the way we live at present, by the way society is organised?

Poverty and Pressures
The sex difficulties caused by basic material need are those most clearly attributable to the nature of society. Lack of money to feed a family, poor living conditions or anxiety about employment can only have a negative effect on a relationship. The most important sexual organ is the mind, and minds full of the tension and worry generated by poverty militate strongly against happy sex lives.

Yet even when the bread line or unemployment aren’t an immediate threat, few people seem to get sex right. One reason for this is that most people, even when they’ve no worries about the next meal, live their lives under various kinds of socially-induced pressures. Stress at work, the strain and fatigue of having to rush about or behave in ways that may be desirable for reasons of appearance but don’t really suit you as an individual, the harassment of looking after more children than you really wanted: all these things cause anxieties and tensions that can't be shaken off at will and can only inhibit the relaxation and emotional harmony needed to achieve togetherness.

Compounding this is the system of legal marriage which can make women financially dependent on their husbands and lays strong moral and social obligations on both partners. The feeling of being trapped for life can lead in many cases to resentment, mutual recriminations and worse. Divorce is a way out but a difficult (and for many women a financially impossible) one, in a society which posits monogamy as an ideal.

Family Life
But poverty and pressures are only part of the story. If they make a good sex life difficult once we become adults, the basis for sexual frustration is laid at an early age by the oppressive role that today’s society has assigned to the family.

The family under modern capitalism has in common with the family in previous forms of society the function of producing and rearing offspring to continue the species and of equipping them with the skills required for survival. Here however the capitalist family parts company with its predecessors. For, in a society based on wage labour, being equipped for survival means being equipped to sell one’s energies to an employer for a wage or salary. The acquisition of the skills that will enable children to do this is what the family must ensure takes place. If these skills aren’t acquired, a family is considered to have failed. We can see the drive towards this goal through the strong emphasis put on the question of what job children will do when they become adults. One of the most frequent questions children, even very young ones, hear from adults is: “What do you want to be when you grow up?”

This helps to explain why the environment in which most children and adolescents grow up is one that frowns on pleasure. It’s not for nothing that the word children most often hear from their parents when they first become mobile is “No!” The imperative of preparing children for the job market and the non-enjoyment adults associate with work, make parents view with suspicion or hostility a child’s tendency to behave as though life were something to be enjoyed rather than suffered. They often make their children miserable and resentful by imposing upon them seemingly irrational rules that restrict their pleasure. These include rules about sex. Young children are discouraged if they are seen to touch or take an interest in “naughty” parts of the body. When they reach adolescence, the rule of the system transmitted through the family is that they keep their sexual feelings under wraps for the time being and only take the wraps off later when they’re more “mature” and “responsible”—when they’ve found a job and resigned themselves to it.

After being denied the natural sexual outlet with the other sex that their newly-awakened feelings dictate, most young people, when they reach the social socially approved age for sex, lack the knowledge and confidence that earlier experience should have given them. They’ve not been able to experiment freely, openly and without guilt with a number of different partners and gain experience in this aspect of growing up as they may have gained it in others. Having also been denied, for the first fifteen or twenty years of their lives, the right to make decisions about so many aspects of their own lives (parents and teachers have done most of their thinking and taken most of their responsibility for them), they inevitably lack practice in making independent and responsible choices about things.

This makes for anything but the mutual consideration, give-and-take and sense of imagination necessary for happy sexual and emotional relationships. It makes rather for feelings of jealousy, lack of trust and honesty, and a profound incapacity to know your own and your partner’s needs.

Is it surprising then that, when people become adults physically, they often remain children sexually and emotionally? They haven’t been given the chance to sort themselves out in this field and, when they reach adulthood, this leads them into all kinds of tangles and frustrations. How many people —even the most apparently responsible and politically and socially aware among us — don't suffer from being stuck somewhere way back in their emotional and sexual development?

This is not to suggest that if society allowed us to live out our early sexual needs when we felt them we would all, as adults, be suited by a single contented relationship for the rest of our lives. Monogamy is no more or less a “natural” form of human behaviour than many others. It’s a mental mould that present-day property-owning society tries to force people into. The needs of individuals, in the sexual field as in others, vary enormously and while, in conditions of genuinely free choice, monogamy might truly suit some people, there is little doubt that it would not suit others. The point is not that monogamy could or should be the norm, but that the emotional confusion and irresponsibility of so many adults is rooted in the sexually repressed upbringing dictated by the needs of the wages system.

Sex and Profit
The problem is compounded by the fact that, while frowning on the practice of sexuality by young people, capitalism bombards them with sexual spectacle of all kinds. This contradiction arises from its seeking to make profit out of anything, even people’s problems — and indeed even to create problems out of which profit can be made. Cinema, advertising and books emphasise and inflate the importance of sex. They also often give a distorted view of what we should expect from it. The beautiful, sexually potent men and women flaunted by the media create in both young people and adults unjustified feelings of inadequacy and inferiority, a false idea of where sexual fulfilment comes from and unhealthy obsessions about sex in general.

Sex is of course an important part of life. But the whole point about it is that it needs to be integrated into the wider spectrum of human activities, not to stand obsessively above or apart from them.

In this respect many primitive communities not based on the sale of human energies for money have a much healthier attitude towards sex than more “advanced” societies. In communities such as described by Margaret Mead in her classic study, Coming of Age in Samoa, sex is practised much more openly and unashamedly by adults. Children see it as a natural part of life, and begin to learn about it and experience it much earlier, without the taboos and interdictions most of us take for granted. The “facts of life” don’t have to be told to children by their parents. They’re picked up naturally through living. They’re not half-learned at school through dirty stories or through the misleading suggestions of commercialised sex. The consequence is that people in such communities grow up with a less inhibited, less secretive attitude towards sex. Sex fits into their lives like other natural human activities. They don’t need guide books to tell them how to practise sex or what they’re missing in it any more than they need to be instructed on how to get the best out of eating, drinking, sleeping, working or playing. Sex isn’t an over-central preoccupation. It doesn’t — as it shouldn’t — come into a special, mystifying, frustrating category of its own.

Common Ownership
This is not to say that to get sex right we’ve got to go back to primitive society. It’s just to show that the evidence of sexual attitudes in primitive societies indicates that sexual problems, to the degree they’re experienced today, arise not from our nature as human beings but from the social conditions we live in. And there’s clearly something wrong with conditions that turn an essential natural function and a potentially pleasurable experience into a widespread source of misery, anger, guilt and frustration. Removing the conditions will remove the straitjacket on people’s emotions and make it unlikely that we will arrive at adulthood with little knowledge of how to enter into a mutually satisfying relationship with another person. New social arrangements based on common ownership, voluntary co-operation and economic and social equality will remove the conditions and create new ones that will offer free rein, as capitalism never can, to the development — mental, physical and emotional — of each individual’s potential. They will help sex to find a more secure, harmonious place among the whole range of activities that are natural to men and women.