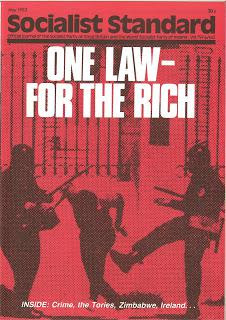 A thick skin is necessary to all politicians and this government abounds in rhinoceros figures. Some of them revel in an acknowledgement of their popular caricature — Thatcher the quick-tempered autocrat, Tebbit the parliamentary bovver boy, Howe the dead sheep of Westminster. But there is an exception; a minister who functions rather like a problem child, plastering its family into a false unity through itself carrying the burdens of their fractious confusions. Sir Keith Joseph, Secretary for Education, is liable to flog himself publicly with statements like: “You can't possibly blame Geoffrey Howe, he’s been marvellous. And the prime minister too. It’s me. It’s people such as me who are to blame.” Demonstrators who are unable to impress ministers like Tebbit sense that with Joseph they are close to a kill and they do not spare his feelings. "Sir Keith," read a placard which greeted him in South Wales. "You are mad and we hate you."

So it should be remembered that Joseph emerged as a government minister to a mixture of wonder and gratitude that so clever a man should spare us the time to take over a ministry and solve all our problems. (One hack was so excited that he likened Joseph's carefully argued opinions to fine sherry.) He came into the world with his mouth crammed with silver cutlery. His family, owning the Bovis building firm, were rich enough to send him to Harrow and Oxford University, where he so impressed everyone that he became a Fellow of All Souls. In Oxford, this is very significant; there are no undergraduates in All Souls, which is inhabited by Fellows who are reputed to be very superior people, the highest authorities on law, history and the social sciences. After a short spell being superior as a barrister. Joseph got into Parliament and was eventually given some inferior jobs in the government until in 1959 Macmillan made him Minister of Housing. A few years ago he was regarded as at least a future Chancellor of the Exchequer, possibly the next Conservative Prime Minister — a man who had left the most cloistered environment to put to rights a few trivial matters like slums, war and poverty.

Joseph made a consciously impressive start at the Ministry of Housing by going to look at some slums and then making a speech about them, even mentioning one — London’s notorious Cable Street — by name to show how he had got to grips with the problem. Perhaps in an effort to expand his knowledge, some people who actually lived in slums called round to Joseph’s expensive Chelsea home to tell him what the dirt and the drains and the rats were like. To the sound of Fleet Street’s busily clicking cameras, a bravely smiling Lady Joseph admitted a few scruffy children. One result of Joseph's investigations, for which Cable Street should not be held responsible, was the encouragement of local authorities to build a lot of new slums in the form of tower blocks, although Joseph did not actually intend to avail himself of this remedy for the housing shortage. Councils who followed his policy soon regretted it; the economics did not work out as Joseph had assumed and they found they had erected concentrations of neurosis, disease, crime and drug misuse.

There were few mourners for Joseph, when his time at the Ministry of Housing was ended by the Labour Party victory in the 1964 election. So anguished were the Tories by that defeat that they decided not only to ditch their leader, the amiable, aristocratic buffoon Alec Douglas-Home, but to elect another by ballot. This was an historical change since up to then the Tory leader had been expected to emerge after a bout of vicious in-fighting which Harold Macmillan called "the customary processes of consultation". Joseph was a Heath supporter and was rewarded for this, when the Conservatives came back to power in 1970. Through another customary process Joseph, having failed to make any impression on the housing problem, was given the rather more demanding job of abolishing sickness and poverty. He was put in charge of the Department of Health and Social Security, where he soon got down to an investigation which was to lead him to a discovery even more startling than the slums in Cable Street.

Much deprivation and maladjustment persisted from generation to generation. Many of today’s deprived children were doomed not only to stunted lives themselves but to become, unless they could be helped, the parents of a further generation of doomed children. (The Times, 30 June 1972.)

Joseph called this “the cycle of deprivation" and social workers and teachers were excited at the prospect of lavish official research into a problem which they had been despairingly aware of for a very long time. But the excitement died, when Joseph decided the research showed the cycle of deprivation did not exist, that he had invented it and the whole thing was. in his words, "a pretty negative piece of analysis". It was difficult to decide whether it was more worrying to have a Minister for Social Security who was surprised to find that impoverished families produced impoverished children than one who thought this didn't happen. A year later a positive piece of analysis by the National Childrens' Bureau reported that one million children who were living in squalor and deprivation, educationally crippled from birth, were “doomed to failure".

Joseph lost his job when the Heath government went down to defeat in the disarray of the Three Day Week. He had made some elegant speeches, as befits a former Fellow of All Souls, he had made some promises and, as is expected of government ministers, he had juggled the figures a bit — in his case by introducing reforms like the Family Income Supplement which are supposed to substantially reduce poverty. Lord Carrington was annoyed with him because he had “given away a lot of money” without securing any benefit for the Conservative Party and the poor might have been annoyed with him because there had not been much benefit for them either; as the Heath government left office there were nearly four million people depending on Supplementary Benefit and nearly one and a half million living at or below the official poverty line.

Nobody expected that Joseph’s inability to introduce social security to the people of Britain would harm him in the Tory Party and when, in their bout of anguish after their 1974 defeat they threw out the leader they had chosen in the last bout, he became a strong candidate for the leadership. He might be sitting in Number Ten now, except that he made yet another memorable speech. The occasion was at Birmingham in October 1974 and his audience of Conservatives received an early warning of what was to come. “Let us,” Joseph advised them, “take inspiration from that admirable woman. Mary Whitehouse . . .” He then moved relentlessly on, to the kernel of his speech:

The balance of our population, our human stock, is threatened . . . a high and rising proportion of children are being born to mothers least fitted to bring children into the world and bring them up. They are born to mothers who were first pregnant in adolescence in social classes 4 and 5 . . . Some (of the mothers) are of low intelligence, most of low educational attainment . . . They are producing problem children, the future unmarried mothers, delinquents, denizens of our borstals, subnormal educational establishments, prisons, hostels for drifters . . . Why do I talk about birth control for the unmarried girls in socio-economic groups four and five? Because . . . this group makes far less use of birth control than the other social classes. (Daily Telegraph, 21 October 1974.)

Whatever had once been expected of his theory of the cycle of deprivation, it was not that it would resurface in the form of a crude, class-biased blunder into the perilous field of amateur eugenics. His louder opponents compared Joseph to Hitler; perhaps more damaging was the sort of quieter dismay expressed in Cecil King’s Diaries: “. . . surprising that what was obviously meant to be a major affair was not more carefully considered”.

As he could no longer expect to be Tory leader himself, Joseph threw his support behind Margaret Thatcher, who gratefully foisted him on to the Department of Industry after the 1979 election. It was here that Joseph began to show the first clear signs of serious disintegration. The Tory defeat of 1974 had converted him to the conviction that the happiest way of running capitalism was to ensure that the market, shaped by the profit motive, should be allowed to operate in simple purity. If an industry or a company were not profitable then it should not survive, like a brainless human body on a life- support machine, through financial aid from the government:

Few people expected Joseph actually to believe this argument and any who did expect him to would have had problems explaining what he did as Secretary for Industry. He decided to double state support for companies like British Leyland; he sanctioned £1.5 billion a year in subsidies to industry and £3 billion a year to state industries. One example was in March 1981, when he announced a government guarantee for a £200 million loan facility for ICL. This state-backed computer company had just announced a three-month loss of £20 million, which qualified it to have Joseph switch off the life support machine. To the dismay of the Tory Dries, he kept it going; a home-based computer industry is too vital, for economic and military reasons, to British capitalism to allow it to be damaged by draughts of intellectual sherry from All Souls.

Joseph is now Secretary for Education, which he says he regards as the peak of his career but where he does not have a happy time. He has a reputation as the Mad Axeman of the schools and the universities and everywhere he is hounded by angry demonstrators, who perhaps thought his “cycle of deprivation" speech implied a commitment to step up investment in education. In a recent White Paper he declared his intention to turn the screw on the teachers, as the demand for them falls, by stiffening the qualifications required of them and to make it harder for the teacher who is not up to scratch to keep a job. Joseph’s plans were not well received; a failing teacher may be due to sickness or a weariness with decades of struggling with educational, personal and social problems and in any case Joseph himself does not rate high in the efficiency tables: a chairman of the National Enterprise Board once described him as “hopeless” and in May 1981 the Bow Group journal Crossbow condemned him as “. . . by universal consent the most dismal disappointment of this administration". At uproarious meetings Joseph hears what people think of him, standing as if on the gallows, unable to make himself heard, unable to understand why these clamorous tormentors obstinately refuse to accept the crystal logic of his policies.

But the fault is not in his personality (in private, he is said to be kindly and witty); if he has crumpled it is under the strain of trying to do the impossible. His famous brain has not protected Joseph from the delusion that this social system can be made to work to the benefit of us all. Other politicians, who wear better than Joseph, are under the same delusion and so are the demonstrators. They are all looking for a missing ingredient through which capitalism’s ailments can be put to rights — the demonstrators say this ingredient is human compassion while Joseph says it is cerebral power and purity. All are driven by a common madness which sets experienced reality at nought. The choice is not to bury the likes of Joseph or to praise them. If we are to defeat what he represents we must not only know him for what he is but why.
Ivan
Posted by Imposs1904 at 11:18 AM