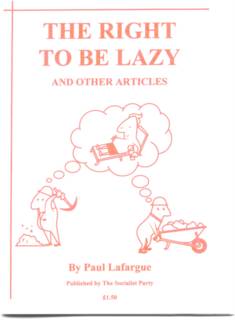 The Socialist Party has just republished this classic pamphlet by Paul Lafargue together with some of his other writings. Below is the introduction.

Paul Lafargue's classic socialist critique of the capitalist work ethic (applicable only to the working class) dates from 1883. This means that some of the bourgeois politicians and ideologues mentioned in the pamphlet have long since been, deservedly, forgotten, but it remains a powerful presentation of the case that what workers should be demanding is not the "right to work" under capitalism but the "right to leisure" in a socialist society, where machines could be used to lighten labour and free people to engage in activities of their choice.

In this sense the pamphlet is a criticism not just of the capitalist work ethic but also of reformists. Its original subtitle was 'Refutation of the Right to Work of 1848', a reference to a demand raised by certain left-wing politicians under the Second French republic set up after the overthrow of King Louis Philippe in 1848. There is of course no such thing as the "right" to work under capitalism the number of jobs on offer to workers depends on the ups and downs of the capitalist business cycle but, as Lafargue points out, even if there were it would be a "slave's right", the right to be exploited. This has not prevented Trotskyists and other reformists, as in Britain in the 1970s and 1980s, launching campaigns demanding the "Right to Work". To which we in the Socialist Party responded, in true Lafargue tradition, by demanding "full unemployment". To the extent that "Right to Work" campaigns receive the support of some workers this is not so much because they particularly want to work in a capitalist factory or office as because they want the higher income that usually comes from being employed rather than unemployed. It is a reflection of the fact that, in capitalist society, everybody has to have some means of obtaining money as this is required in order to get access to food, clothing, shelter and the other necessities of life. These have to bought, and to buy them you need money; which most of us can only obtain by selling our mental and physical energies to some employer for a wage or a salary, a state of affairs Lafargue did not hesitate to denounce as "wage-slavery".

The alternative, as Lafargue realised, made a practicable possibility thanks to the development of the forces of production, was for the wages system to be abolished and for both production and consumption to be free within the framework of a propertyless, classless, stateless and moneyless society which he called interchangeably communism or socialism.

Lafargue's approach to work in a socialist society - that it should be minimised - is only one of two possible socialist approaches to the question. While Lafargue emphasised the "Right to be Lazy" (or, less provocatively, the "Right to Leisure"), his contemporary fellow Socialist across the Channel, William Morris, was arguing that what workers should be demanding was what might be called the "Right to Attractive Work". As he put it:

"I claim that work in a duly ordered community should be made attractive by the consciousness of usefulness, by its being carried on with intelligent interest, by variety, and by its being exercised amidst pleasurable surroundings" (Useful Work versus Useless Toil, 1884).

The two different approaches suggest two different policies that might be pursued in a socialist society: maximum automatisation so as to minimise working time or making as much work as possible attractive and personally rewarding. Lafargue writes here of reducing the working day to 2 or 3 hours. Morris would not have seen the point of this even if he went on to claim above that "the day's work should not be wearisomely long" : if people were getting some enjoyment out of their work surely, on his view, they would want to engage in it for longer than a couple of hours or so a day. As this is not an issue that can be resolved in the abstract, all we can do is to leave the matter to be settled in socialist society in the light of the preferences of those living in it.


Today, Lafargue is known mainly for this particular pamphlet which enjoyed a huge revival in the 1960s and 70s when the capitalistic work ethic came under attack again. Before the First World War, however, he was more widely known as a Marxist thinker and populariser of Marx's views. When Charles H. Kerr of Chicago published an English translation of the pamphlet in 1907 they did so together with some other articles of his on other, different topics. They also published as separate books his The Evolution of Property and Social and Philosophical Studies. But even before these were published in English Lafargue was known to English-speaking opponents of capitalism as an intransigent revolutionary Socialist on the anti-reformist, anti-Revisionist wing of the international Social Democratic movement. It was as such that a number of articles of his were published at the time in the Socialist Standard, the journal of the Socialist Party of Great Britain. We are republishing these here as the second part of this pamphlet. All except the one on the Nineteenth Century (which was reprinted from the Socialist Herald of Milwaukee and which also appeared with a different title as one of the other article in the Kerr publication The Right to be Lazy and Other Studies) were original translations by members of the Socialist Party and have up to now not been readily available.

We have used the 1907 translation by Charles Kerr himself but have restored the original subtitle of 'Refutation of the Right to Work of 1848' and corrected some of the footnotes. We have also added the letter, translated here into English for the first time, that Lafargue wrote to the L'Egalite where an earlier version of the text of the pamphlet first appeared as a series of articles in 1880.


Copies of the pamphlet can be obtained by sending a cheque for 1 pound 30 pence, made payable to 'The Socialist Party of Great Britain', to: The Socialist Party, 52 Clapham High St, London, SW4 7UN.
Posted by Imposs1904 at 3:07 PM