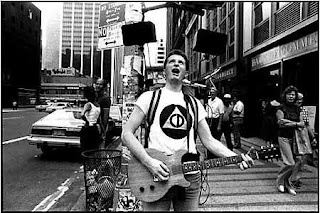 From the September 2012 issue of the Socialist Standard

1984 was the year of the Miners' Strike and Billy Bragg. He identified himself with the Miners’ struggle against the Thatcher Tory government. In fact, Bragg says that Thatcher made him who he was. His album Brewing Up with Billy Bragg contained a song called The World Turned Upside Down about the Diggers and Levellers of the English Revolution of 1649 who advocated the“common treasury” of the earth, the title of the song referencing Marxist historian Christopher Hill's book.  All proceeds from Bragg's EP, Between the Wars, were donated to the Striking Miners’ Fund.

In April, the Reverend Richard Coles invited his old Red Wedge comrade, the ‘Bard of Barking’, Billy Bragg, onto his Saturday Live Radio 4 show, introducing him as “the British Left's most consistent voice”.  Bragg's consistency has been as a reformist, gradualist, and non-revolutionary voice. The Guardian (1 January last year) declared that Bragg had “an unshakeable commitment to democratic socialism”. Is the term ‘socialist’ an accurate description for this Dorsetshire denizen?

Bragg was brought up in Barking in East London, experiencing “the reality of working class experience not the theoretical” and attending Barking Abbey Comprehensive School.  He was energised by the Punk Rock explosion of the late 1970s, stating he was politicised by seeing The Clash at the Rock Against Racism carnival in Victoria Park in Hackney in 1978. The Clash were notorious for radical chic Leftist gesture politics such as wearing Red Brigade/Baader Meinhof T-shirts, and eulogising the Leftist Nicaraguan Sandinista government.

Bragg would have been better politicised if he had seen the Gang of Four confronting British Movement skinheads at Thames Poly in Woolwich in 1979. The Gang of Four were a Marxist post-punk band originating at Leeds University who were influenced by the Frankfurt School, and wrote about love, sex and leisure as fetishised commodities in capitalism, and alienated labour. In 1982, their single, I Love a Man in a Uniform, dissected war and capitalism. This song came too late for Billy Bragg because in 1981 he had joined the British Army. He had not worked out an analysis of capitalism and war and the fact that the working class do the killing and dying in capitalist wars.

After the end of the Miners’ Strike in 1985, Bragg's next campaign was Red Wedge which was a pop music collective dedicated to electing the Labour Party and getting Neil Kinnock into Downing Street.  Bragg told Coles that Red Wedge was “hardly revolutionary, it was Neil Kinnock”. Kinnock was already expelling from the Labour Party Trotskyists such as Militant and beginning the modernisation process that would eventually result in New Labour.  In 1987 Thatcher was elected for the third time.

After the 1987 election, the next stop for Billy Bragg was joining the newly formed pressure group, Charter 88, which had been set up by Liberal/SDP intellectuals. Charter 88 would eventually merge with the New Politics Network (which had evolved from Democratic Left which was, in turn, the 1991 successor to the defunctCommunist Party of Great Britain) and form the pressure group Unlock Democracy.

Barking Abbey Comprehensive School also produced Malcolm Eden and Tim Gane who formed the indie pop band, McCarthy, in 1985 who were explicitly a Marxist group that sang about socialism (Red Sleeping Beauty), the socialist commonwealth (CelestialCity), while their 1987 album, I am a Wallet, was all about capitalism and commodity fetishism in Thatcher's Britain

When McCarthy split in 1990 Tim Gane teamed up with French singer, Laetitia Sadier, to form Stereolab. Sadier told Melody Maker in 1991: “I want to change the world” and Stereolab's lyrics had a Marxist content. One song called Ping Pong in 1994 was a Marxian economic analysis of capitalism's crises. A 1992 song, Surreal Chemist, identifies the Marxist perspective of Stereolab:

“Even more than philosophers/Aiming at no less than the total transformation of man and his world/ True life embodying pleasure principle's noblest triumph/Over the cowering mendacity of bourgeois christian civilisation”.

In 2005, Bragg supported Oona King MP (New Labour, pro-Iraq war) in her election campaign in Bethnal Green and Bow in East London against the maverick Leftist, George Galloway. She was defeated.  New Labour had so abandoned the working class in East London that the far-right BNP gained seats on Barking Council.

The rise of the BNP in his native East London prompted Bragg to write his 2006 book, The Progressive Patriot, where he champions English nationalism and multiculturalism and even draws inspiration from Rudyard Kipling. (He of the British Empire and ‘the White Man's Burden’ whose propaganda egged on the slaughter of millions of the working class in the trenches of the First World War.) Bragg has no class analysis of society and writes he is “developing a narrative which explains how we all came to be here together in this place” (my emphasis) and states we now live in a “present classless society”. He does not see that the capitalist ruling class seek to convince the working class that ‘we’ is ‘the Nation’ and the Nation state is run by the capitalist class in their interests. He does not see ‘multiculturalism’ from a socialist angle, which views it a divisive because it forces the working class to identify with other groups against their class interests.

Since 2001, Bragg has stated that he is a tactical Lib-Dem voter but feels betrayed by the Lib-Dems being in the Coalition government with the Tories: “They had some positive things in their manifesto, and they seem to have abandoned the lot of 'em”.

Bragg told Reverend Coles in April that “there are no utopias, I was never that kind of revolutionary. As if I've ever called for the abolition of capitalism”. He agreed with Coles that his was “a modest programme of change, chipping away at that which is tractable”. Last year he told the Guardian:  “We're living in a post-ideological period” and that “the long shadow of Karl Marx” was over, and of the new protests he did not “care if it's called socialism”.
Steve Clayton