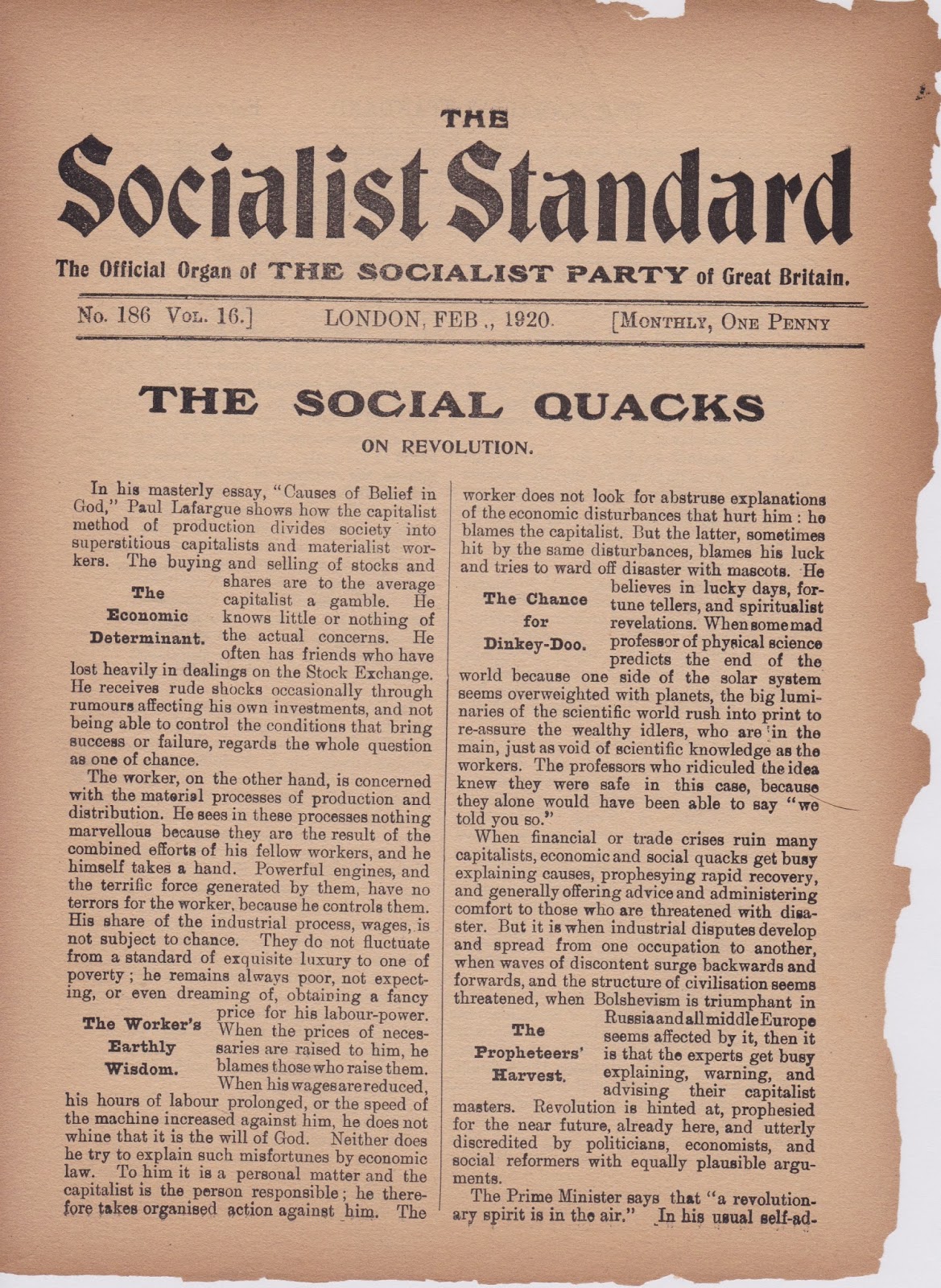 From the February 1920 issue of the Socialist Standard

Socialists have often been told that they are not practical, that their ideas are of a visionary character, and that they lack knowledge of political affairs. Let us see how far this stock argument of the "anti" is correct.

In the sixth clause of its Declaration of Principles the Socialist Party states: " . . . the machinery of government, including the armed forces of the nation, exists only to conserve the monopoly by the capitalist class of the wealth taken from the workers . . . " That is to say that Parliament, which passes the laws, the Cabinet, which frames them, the officials at Whitehall and elsewhere who execute them by giving orders to generals and judges, who in turn direct soldiers and policemen, all have one common object, which is to

We see this illustrated nearly every day of our lives. Take up any paper and you will find how this or that unfortunate member of the working class has been run in for taking, by "direct action," something which did not "belong" to him. Let any considerable body of workers strike, and immediately troops are despatched to the scene of action. Why? Because strikes mean hunger, which in turn leads to attacks on property. Finally, let any foreign group of capitalists threaten "our" trade, "our" empire, or "our" country, and forthwith the same troops are sent, not by the hundred or thousand, but by the million, to defend that which, to "our" masters, is dearer than our lives, i.e.,

And this property is all the product of the workers' labour. Whether it be acres of land, picks or ploughs, ships or railroads, factories or machines, shops or goods for sale, all are taken from the workers, all are owned and controlled by the master class for the purpose of wringing still more wealth from the sons and daughters of toil.

Is there anything fanciful or far-fetched about this statement? Does it not rather reek of reality at every turn? Let us, then, proceed to examine the following:

"The working class must organise consciously and politically for the conquest of the powers of government . . . in order that this machinery . . . may be converted . . . into the agent of emancipation . . . "

In the first place the workers are accustomed to organising for defence. Trade unions to-day comprise something like a quarter of the adult population. In fact, the amount of organisation existing is worthy of a better cause. We suggest that a change in tactics from mere defence (varied by surrender on important occasions) to a vigorous attack is necessary. And the proper place to deliver an attack is against the enemy's weakest spot—the ballot box. It is not enough to strike—the bosses can sack you and starve you! It is not WAR to start a little street-corner insurrection, in which only the workers' blood is shed and a capitalist can only get hurt by accident! These, of all policies, are the least practicable.

But
SEIZE THE POLITICAL MACHINE!

That is the source of the masters' strength. And it is to control that for which they most need your support! It is for that they tell you all kinds of lies, make all kinds of false promises, and employ the most cunning scoundrels the country holds. Don't be deceived by the fact that a vote is simply a piece of paper. So is a bank note or a police summons! But behind the paper is the power! Capitalists are practical men; they don't ask you to vote for fun. They know that when the workers cease to vote for them and send to Parliament, instead, the representatives of a revolutionary class, the game will be up. It will be the turn of the "respectable people" to turn rebel—if they have the guts. The worst they are likely to achieve, however, is to bribe a few fools to do their dirty work for them; but the machinery of government includes the armed forces of the nation. The workers supply the guns and all the equipment of the fighting forces, in addition to the personnel of the rank and file. All that is necessary, therefore, to control those forces is the organisation of the workers themselves

for that purpose. Is there anything impossible in that?

This organisation once established can only have one object, i.e., to abolish the monopoly of the wealth taken from the workers by the masters. It will convert into common property the means of production, i.e., land, factories, railways, etc., and thus impose upon everyone the necessity of work and the freedom of all to enjoy the fruits of their common labour. No one will be able to live on rent, interest, or dividends, a life of idleness. None, on the other hand, who are willing to work, will stagnate in the half-starved ranks of the unemployed. The organisation of the workers will proceed to control industry. Again we challenge contradiction when we assert that this is the only practical solution of the workers' problems.

The various parties of the master class—Tories, Unionists, Radicals, etc., have long ago established their privileges, and now spend their time in retaining them. This they do by interesting the workers in every piece of legislation, etc., which they, the masters, from time to time consider necessary. Taxes on imports, taxes on land, taxes on incomes, more efficient State control of this, that or the other; all these measures are dressed up


IN THE GUISE OF REFORMS

for the benefit of the workers in order to gull them into voting their masters into power. In opposition (so called) to these parties stands the alleged Labour Party (or hotch-potch of parties) which differs from them only in the fact that its programme of "reforms" is more "advanced"—that is to say, it is calculated to more thoroughly organise capitalism and deceive the workers. None of the Labour Party's proposals differ in this from the Single Tax and other "progressive" nostrums! Every measure proposed by non-Socialist parties reveals, when closely analysed, some other attempt on the part of some section of the masters to increase or protect their revenue in some way. In no case will it be found that the workers benefit in any way. Parties are the expression of interests. The "practical politician" will be hard put to dispute this. Turn for yourselves to history and see for example how the landed Conservatives struggled against the rising manufacturing Liberals. Where is the party of the workers?

It can only be a party which
FIGHTS THE MASTERS!

It cannt be a party, which, like the "Labour" Party, joined the Coalition of Capital when it saw jobs given away and only left it to get into a position to bargain for more! This sort of thing may be "practical" for job-hunters: it is of no use to revolutionary workers. The Socialist Party, therefore, wages war on all other parties, and calls upon the workers of this country to muster under its banner.
Eric Boden
Posted by Imposs1904 at 3:10 PM

I'm sure you've noticed the rather unusual layout for this particular article but I've just laid it out as it originally appeared in the February 1920 issue of the Standard.