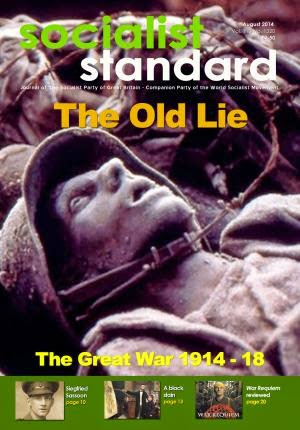 Editorial from the August 2014 issue of the Socialist Standard

Fifty  years ago, on the 50th anniversary of the outbreak of the First World War, the general opinion expressed by commentators was that it was not something to be spoken about in favourable terms. It was a terrible tragedy not a glorious historical episode.


In those days anti-war sentiments were more widespread than today. Maybe because many were still alive who remembered its horrors. Maybe it was because the main war going on at the time – in Vietnam – was particularly unpopular. In any event, the Military Wives would have stood no chance of topping the charts at Christmas.
Today things are different. Historians have been found to eulogise the war as necessary and just. From the point of view of the British ruling class this is true. All its war aims were achieved. Competition from German capitalism was crushed and its attempt to build a railway from Berlin to Baghdad was thwarted. German colonies in Africa passed under British control as did, on the break-up of the Ottoman Empire, the oilfields of Mesopotamia (now Iraq). The British ruling class had every reason to be satisfied with its outcome.
So it is natural that a historian with their interests at heart such as Max Hastings should revive the arguments used at the time to justify British participation in the War. Rather surprising is the position of another pro-ruling class historian, Niall Ferguson, who argues that Britain should have stayed out and let the Continental Powers fight it out amongst themselves. This was in fact the position taken up by some members of the Liberal government  at the time.
From the ruling class point of view Hastings clearly expresses their interests better. If the British state had not joined in, it would have not acquired Germany’s colonies nor the oilfields of Mesopotamia. And if German capitalism had won British capitalism would have faced a strengthened competitor on world markets and a threat to its Empire.
But what about the workers? Although they had no interest in the issues at stake – colonies, markets, trade routes, investment outlets – many were persuaded to support their respective ruling classes, in France and Germany as well as in Britain. A large number went willingly to the slaughter without needing to be conscripted. This was a measure of the general lack of a socialist or a class consciousness. Not considering any alternative to capitalism most workers in the combatant states were persuaded to identify with the interests of their rulers.
Is the situation any different today? Nationalism and a lack of class consciousness are just as widespread now as they were in 1914. This means that workers today could also be manipulated. Glorifying the First World war as necessary, and those whose lives the state sacrificed to achieve the ruling class’s war as heroes, is part of the process of keeping this possibility alive. To combat this is why we are publicising as still relevant the anti-war and anti-capitalist position we took up in 1914.
Posted by Imposs1904 at 2:40 PM