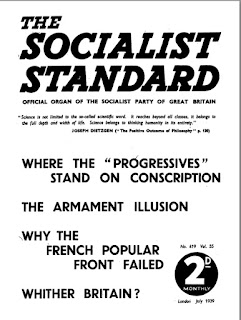 From the July 1939 issue of the Socialist Standard

Those already acquainted with the Socialist Standard and the Socialist Party will know that until now all the editorial, propaganda and organisational work of the Party has been carried out on a purely voluntary basis. We have never concealed the fact that, as far as we are concerned, it was a case of making a virtue of necessity. For, although we have recognised for a long time the desirability, not say the necessity, of comrades devoting their full time to working for Socialism, we have never been in a position to make this possible.

For the first time in the history of the Party the energy and self-sacrifice of Party members and sympathisers has made possible the appointment, for an experimental period, of a full-time organiser-propagandist for the Provinces. During the last two weeks Comrade A. Turner has been in Manchester, and has been devoting his energies to propagating the case for Socialism, and in assisting the Manchester branch in its organisational work. In spite of the difficulties which are bound to arise in connection with what is for the Party a new venture, the results so far more than justify the most sanguine anticipations. If members and sympathisers of the Party could have witnessed, as the writer of these notes did, the keen and intelligent interest with which almost a 1,000 workers from the Fairey Aviation Works listened to the Socialist case; if they could have seen the smaller, but no less keenly interested audience at lunch-hour meetings outside the Manchester Tramways Dept. and finally, could have seen the large and attentive audiences that attended our Sunday afternoon and evening meetings in Platt Fields and Stevenson Square, their hearts would have leaped with joy!

But the results so far obtained have not been confined to well attended propaganda meetings. From quite reliable sources we know that the series of dinner-hour meetings held outside the works mentioned above has resulted in keen discussions of the Party's case within the works. Many workers who, until now, were ignorant even of the existence of the Party are debating with their workmates the policy of the Party in relation to war and the other social problems with which the workers of Manchester, as elsewhere, are faced.

At the last weekly meeting of the Manchester branch more visitors were in attendance than ever before in the history of the branch. As a result of special appeals and announcements we hope that this week's attendance will cause serious concern — to find the necessary accommodation! A series of lectures has been started, and will be given every Monday at 8.30 at the party rooms, 15a, Shudehill, Manchester. All readers of the Socialist Standard in Manchester and district are heartily invited to attend and bring along their friends.

Last, but by no means least, and in spite of the relatively unfavourable weather conditions, we have to report record sales of literature. During the fortnight Comrade Turner has been in Manchester, the branch, with his assistance, has managed to dispose of £5 2s. 6d. of literature.

This, then, is a brief, and we fear, inadequate report of the beginnings of an effort which it is hoped may become a permanent feature of our Party life. Here is something which is worth while, and which deserves and demands the whole-hearted support of every member and sympathiser of the Party. With the active, and above all, the financial support of all concerned, it will be possible to gave not only one full-time worker for Socialism, but many. What is now being done in Manchester can then also be done in every important industrial centre of Great Britain, and we shall the be an appreciable step forward in what is at the moment our most pressing task in the struggle for Socialism—the building of a strong Socialist Party.