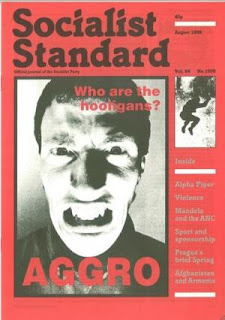 From the August 1988 issue of the Socialist Standard


"We now go over to the ITN studios for a newsflash . . . ""An emergency telephone number has been issued for anxious relatives . . . "

The explosion and fire aboard the Piper Alpha platform on 6 July was waiting to happen. The revelations and admissions that followed within a few days of the disaster make that clear. The only surprise should be that it hadn't happened sooner.

Speaking in the House of Commons in the immediate aftermath of the fire the Energy Secretary, Cecil Parkinson, said, "Safety is the first priority of the Government and the operators." This is not true. Certainly safety is the a very high priority, for accidents cause lost production and in the case of Piper Alpha this was on a massive scale. But safety is not top priority. What stops a company from ceasing trading - a poor health and safety record alone or simply a lack of profit? What the House of Commons should have heard from Parkinson is that safety takes second place - to production.

The unavoidable fact about capitalism is that profit ultimately dictates. This is as true for the very first days of the North sea oil boom as it is for the last days of Piper Alpha.

To relieve pressure on the balance of payments and raise tax revenues as quickly as possible, British governments of the 1960s and 1970s - both Labour and Tory - went out of their way to ensure that offshore oil reserves were exploited at the earliest opportunity, particularly following the oil crisis of 1973. In planning their exploitation and production schedules, the oil companies were therefore presented with few government restrictions. Just as capitalism forced companies to maximise productions and profits, so the state too, is required to put safety to one side when convenient. As the professor of Marine Technology at Strathclyde University put it, "the number one priority after the 1973 oil crisis was to get oil quickly, and you don't get a Rolls-Royce for the price of a Mini".

Like other platforms, the Piper Alpha was built at a fraction of the value that would be created once production started. It cost £530m and was in production for 12 years, during which it pimped approximately 1,000 million barrels of oil ashore. At the current (depressed) price that is the equivalent to some £10,000m. The cost of the platform and wages bill (about £20m per annum) over the period amounts to just a few per cent of the wealth created. In the UK sector of the North Sea some 1,500 million pounds worth of oil is pumped out per month, with the government making £300m in export revenue.

These figures give some indication of the vast fortunes to be made in the North Sea -not, needless to say, from working there but just by owning. It is in the context of the disaster appeal - £1m from both the Government and petty cash box of Occidental Petroleum - should be viewed.

Much is made of how well-paid the average offshore worker is. The average pay is between £200 and £600 a week for a very exhausting, anti-social and stressful lifestyle. If that is high pay, what can be said of Dr Armand Hammer, chairman of Occidental Petroleum and one of the richest men in North America? The present writer was offshore on 6 July, on a platform from which the Piper Alpha was just a faint glow fifty miles to the north. Talking with some of the oil-workers as increasingly alarming reports were coming in, the impression gained was far from the usual macho image of oil-workers. It's not bravery or stupidity that makes them work offshore, but simple necessity. As one man put it to me, "You don't like to think about it. You can't afford to think about it".

Workers have regularly had to die for oil. When "their" countries go to war over ownership of natural resources, workers are required to do the dirty work of killing and dying for companies like Texaco, ELF or Esso. It's much the same in "peacetime": the war to defend profitability, the battle to advance the share of the oil market, is fought on the front line oil platforms by members of the working class.

So we shouldn't be shocked at the latest casualty figures. Within 48 hours of the disaster, grieving Occidental accountants recovered their composure long enough to calculate the cost to the company would be about $25m, reducing the estimated profit for this financial year to $200m. Shareholders would have to bite the bullet and suffer the tragic loss of 5-10 cents a share.

It's not all black armbands in the City though. The fire which devastated the platform and did much the same to 170 families, prompted some ferocious trading in New York and London while still smoldering: "Crude prices jump on news of disaster". (Headline, Guardian 8 July). North sea oil prices, previously depressed by a production "glut" (how many OAP's died of hypothermia last winter?), immediately rose by 25 cents a barrel.

The public inquiry which starts next month is likely to call for changes in the organisation of offshore safety. In 1980 responsibility for North Sea safety was transferred to the Department of Energy, whose function it also is to maximise production. At present, a variety of regulatory agencies and inspectorates have this responsibility but are insufficiently strict because they compete with each other for business. What is needed, according to experts, journalists and politicians, is an "independent" body such as the Health and Safety Executive, who presently enforce (if that is the right word) health and safety on the mainland.

The HSE is, however, a separate arm of the same body. As a watchdog it may be on a longer leash but it has little bark and fewer teeth. Its independence is as genuine as the Energy Department's and divorce from the overriding motive for capitalist production is, in any case, impossible.

It is likely that the inquiry will recommend improved designs of platforms and that most of these will be ignored or disputed by the oil companies on grounds of cost. Even the measures that can be introduced may only be effected if required across the board, of all operators; otherwise, companies will claim that new safety measures would make them uncompetitive. Many improvements could be made: larger platforms would allow the accommodation areas (where so many died on Piper Alpha) to be sited further away from production units; adjacent accommodation rigs would be safer still; fully automated systems are technologically feasible.

The immensely impressive technology used to extract oil from the sea-bed is not, it appears, available for ensuring worker safety. Technology under capitalism is redundant until it finds a market:


Capitalism has made this level of technology possible, but available only to the minority who can afford it. A sane society will not need to rely on governments, companies or authorities to enforce safety. Socialism will rip the price tags from everything and liberate the productive potential of the world. It's a point to consider the next time your programme is interrupted by a newsflash and pictures of Mrs. Thatcher on another ward round.