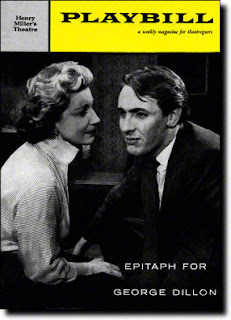 "Look Back in Anger," "The Entertainer" and now "An Epitaph for George Dillon": John Osborne's trilogy of failure. Jimmy Porter is a failure, Archie Rice is a failure, and George Dillon is a failure. This cannot be without significance, the question is—why? The remarkable success if these plays is largely due to a strong sense of identification that many people have with them. They unconsciously or otherwise see something of themselves in the problem children John Osborne has set before them on his stage.

Each of these three plays represents in one way or another the frustrations and disillusionment of youth in post-war Capitalism their sense of personal failure on the one side and the failure if Britain to remain a front-rank Power on the other, expressed in a soured romanticism the famous "anger," which paradoxically is aimed at those very elements they most desire. Romanticism is essentially the reaction of people to a society which fails to provide them with a satisfactory function. The inability of Capitalism to deal with this basic need thus creates a strong romantic craving for the nebulous "lost cause," for the ideal beyond the drab reality which, unlike in its formative years, the chromium-plated Capitalism of the mid-twentieth century is unable to satisfy. Society has no need of them. Consequently they contract out of the problems of Society, rejected, resentful and rebellious, seeking something, somewhere, that will claim them as its own. Cheated of their purpose and their identity, they seek instead a mythical past, looking backward in anger and also nostalgia, to an age which they imagine had a place in the sun for them as well as the country they pretend in their jilted patriotism to despise.

"An Epitaph of George Dillon," which John Osborne wrote in collaboration with Anthony Creighton, now running at the Comedy Theatre, presents us with the tragedy of such a failure. The artist in Capitalism—a tune without an instrument, unbidden and unwanted, a flower that has somehow strayed amongst the more practical vegetation—unlike his fellow workers in industry and commerce who at least have a point of contact, a specific function, however unsatisfactory and creatively barren.

George Dillon is an actor and playwright, guiltily ashamed of his social impotence. (The alienation of the artist from Society and also the stultifying of the artist in each one of us, making work more often than not a penance, is one of the most vicious aspects of Capitalism.) His failure to be a complete human being induces in him contemptuousness of his class through his inability to communicate with them on his own terms. Dillon's contempt and cynicism towards the working class family, on whom he lives is sickening. (Sickening also is the way some members of the audience find this funny.) The narrowness and meanness of their existence symbolises to Dillon his own predicament as an artist and their attitude to him, that of Society to all artists; betimes hostile, patronising, or merely uncomprehending. To the dire necessity of earning a living Dillon eventually succumbs: to suffer a fate worse in reality than complete negation as an artist. Our Society, with its hollow values—as the play shows—which makes even its own vapid morality bow before snobbery and cheap personal success, turns Dillon, the rebellious profligate outsider and erstwhile idealist, into a soggy hack-writer of "prolefeed." Now capitulated to Capitalism's suffocating conformity, it has a place for him at least—but not in the sun.