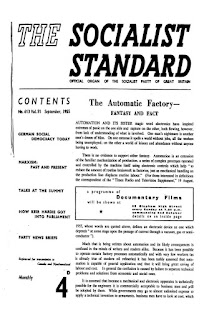 From the September 1955 issue of the Socialist Standard

See Parts One and Two in the series

While the organisations we have been discussing were struggling for recognition they were joined by an entirely different stream.

Old trade union leaders like Thomas Burt and Alexander Macdonald had been elected to Parliament, in theory to represent labour’s point of view; in fact they wore little more than supporters of the Liberal Party who used them as decoys. In areas where there was considerable dissatisfaction with existing conditions the Liberals backed these “working men” candidates; when elected the latter fell in line with Liberal policies. The organisation of the unskilled workers and those outside the established unions during the eighties and nineties thrust a fresh and awkward element into the political arena. This new unionism, based upon the most depressed sections of the workers, was inclined to shed constitutional illusions relating to industrial action, and the strike weapon came to the front again as a means to enforce the workers demands for amelioration of their conditions. Workers who were prominent in this new movement attempted to induce the Trade Union Congress to take more vigorous political action, but their efforts did not meet with much success at first; a few resolutions were carried but the domination of the old leaders was still strong enough to prevent any action being taken on them. The battle between the reactionary leaders and those imbued with the more radical ideas of the new working class political parties became stronger and a violent struggle took place at the 1889 Dundee Trade Union Congress in which the militant group, headed by Keir Hardie, was again defeated.

In the meantime Thorne, Tillett, Mann and Bums, had been busy organising the gas workers and dockers and obtaining the concession of an eight hours day for the gas workers without having to resort to a strike. A few months later the London dock workers struck and were successful in gaining their demands. These successes gave an impetus to trade unionism and also raised the prestige of the new trade union leaders.

At the 1892 Trade Union Congress the efforts of the militant section were rewarded by the carrying of a resolution calling upon the parliamentary committee to report to the next Congress on the question of independent labour representation. At the same Congress a resolution sponsored by the Social Democratic Federation that support should only be given to Socialist candidates was lost by a comparatively small margin. The following year the Congress decided to set up a parliamentary fund, and to give support wily to those candidates who advocated “ the collective ownership and control of the means of production, distribution and exchange,” but an amendment by Keir Hardie on complete political independence was lost. That the majority of the delegates who voted for the resolution had little idea of its implications must be obvious; in all probability the vigour of the militant section and lack of faith in the old methods swept them away. Keir Hardie, one of the leading militants, was secretary of the Ayrshire miners union and had been elected to Parliament in 1892 as an Independent. He was opposed to Marxian historical and economic theories, holding the view that Socialist revolutions had been occurring throughout history since the disintegration of tribal Communism. To him “Socialism, like every other problem of life, is at bottom a question of ethics and morals.” (“From Serfdom to Socialism” 1907, page 35.). His idea of the road to Socialism he explains as follows:


“In like manner it is conceivable that the transference of industries from private hands to the State will be a gradual and peaceful process. Already, in fact, the process has advanced to a considerable stage. The property held and worked and controlled by municipalities already exceeds £500,000,000 sterling in value, and is being added to yearly. This process has but to continue long enough to ensure that every industry will pass under public control, and thus State Socialism will become an accomplished fact, by a gradual process of easy transition.”—(p. 27).

By ‘State Socialism’ Hardie meant that Nationalisation and Municipalisation with which we have become familiar, under which the Capitalists as a class own collectively, living upon the interest they draw from their bondholding.

The idea of building up an independent working class party on a large scale was now in the air. At the instigation of the progressive groups a conference was held at Bradford in 1893 representing all kinds of labour groups, including the Social Democratic Federation and the Fabian Society. The Socialist League had fallen to pieces in 1890 when it turned Anarchist and Morris, Eleanor Marx, Lessner, Bax and Aveling had left it and returned to the S.D.F. At the Bradford Conference the Independent Labour Party was formed and rapidly absorbed the provincial groups of Fabians. The Social Democratic Federation affiliated to it for a few months and then left. One of those who took part in forming it was Robert Blatchford, who founded the Clarion as a weekly periodical in 1891 and had written a book “Merrie England,” published in 1893, that had a very wide circulation and was a popular propagandist booklet for many years; its appealing style was mainly responsible for this.

The Independent Labour Party soon made headway displacing the Social Democratic Federation in popularity. Frederick Lessner and other members of the latter party joined it, as also did Ramsay Macdonald and members of the Fabian Society. It had for its object “To secure the collective ownership of all the means of production, distribution and exchange,” and its programme was made up of the principal reforms that figured in the programmes of the older parties including “Taxation to extinction of unearned incomes,” “Remunerative work for unemployed,” and “Substitution of arbitration for war and the consequent disarmament of the nation.” The Fabian element was, and remained until recent years, the prevailing influence in the Independent Labour Party. Keir Hardie became the President and Tom Mann the General Secretary of the new party.

The further development of the Independent Labour Party was merged in the development of the Labour Party. The majority of the early Labour M.P.’s were members of it. Although it still lingers on the 1914-1918 war Coalition Government, the rise of the Communist Party and Labour Government, practically killed the Independent Labour Party as well as the Socialist Democratic Party. Born in confusion, tied up with reformist policies and supporting all that they thought was “progressive” they finally sank in the morass of “ practical politics.”
Gilmac.