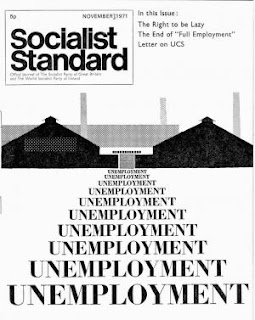 On reading your August edition of the Socialist Standard, I was shocked and disappointed at the inaccuracies and blatant lies given out under the heading "Revolt on the Clyde”.

In a previous article entitled “Do You Know About Socialism?” you attack the working class of this country for their placid acceptance of the controls and restrictions placed on them by the capitalist system. And yet when a section of the working class make a stand against this system of suppression you immediately condemn them out of hand for being unrealistic.

The author of the derogatory article states, "That workers in a declining industry like shipbuilding have any economic power capable of overcoming the all too real and socially accepted political power of the government is a myth”. This statement shows a gross ignorance of the world shipbuilding situation today. A little investigation would have shown that the true situation is the reverse of that stated. World tonnage for ships launched has been steadily increasing over the past ten years, and there is no evidence to suppose that this increased demand will not continue.

The statement, "Locked in the yards with no work and no money the workers would only be able to hold out for a short while”, again shows a lack of understanding of the situation. Due to tremendous response from all over Britain in the way of donations to the UCS fighting fund and weekly levies imposed by trade unions, the shop stewards should have sufficient capital to re-employ UCS workers as soon as they are made redundant until March 1972. There is also sufficient work in the yards to keep the men fully occupied until then. By this time it is envisaged that the government will have altered its viewpoint on the situation.

It is further implied in the article that UCS in its present form is not viable, and that the cause has been partially lost because "thousands of Clyde shipyard workers did lose their jobs while Benn was Labour Minister”. May I point out that the thousands mentioned were laid off during the creation of UCS as part of a productivity agreement with the unions concerned. Since then the company has increased productivity and improved labour relations no end and can now confidently quote £5.5m. for the 17,000 ton cargo ships which are so much in demand as against Japan’s quote of £5.3m.

The government sponsored Shipbuilding Industry Board says in its report that the shipyards are in better shape than they have been since the war. "They deserve encouragement and support”.

Since the shop stewards took control of the situation at UCS, words such as "occupation" and "workers’ control” have been bandied about, not by the stewards but by irresponsible articles written by authors lacking in either basic socialist morals or common sense. In direct contrast the men in control of the UCS at present have shown themselves to be responsible, realistic and genuinely concerned about the current unemployment situation.

These men are fighting for The Right to Work, a right regarded by true socialists to be basic and by the present government to be contrary to the theory of capitalism.

I therefore respectfully suggest that your publication refrains from the type of public sniping and destructive criticism we are accustomed to in the capitalist press and get on with the job of educating the people of this country in preparation for socialism.

You could begin by assigning the author of the article to the organisation of appeals on behalf of the UCS fighting fund and therefore practically assist those who are currently leading the fight for a basic socialist principle, The Right to Work.
F. J. Coyle, London, W.5.

REPLY:
We have never condemned the UCS workers. Quite the reverse. The article in question wished them luck “in using their bargaining strength to get the best of redundancy terms they can”. Which is essentially what the so-called work-in is about. It is not the beginning of a workers’ revolution, nor the expropriation of the capitalists at the point of production but, as Mr. Coyle recognises, simply a trade union tactic of an unusual kind.

We do not doubt that the UCS shop stewards are what Mr. Coyle describes as “responsible” and “realistic”. For all their fiery words, they must know that all they can hope for is some deal, either with the government or with some capitalist like Archibald Kelly, that will save as many jobs as possible. It is to their credit that they do not seem to be interested in leading the Clydeside shipworkers into a head-on clash with the forces of the State, despite the nonsense mouthed by those criticised in our article (and despite some of their own earlier statements made in the heat of the moment). In passing, we would challenge the accuracy of saying that the stewards now “control” the yards seeing that for the time being it is also in the interests of the liquidator that work on the unfinished ships goes on.

The shop stewards must know, too, that any deal is bound to involve some redundancies. We stand by what we said on this, that whatever happens some (more) Clydeside shipworkers are bound to lose their jobs because of the profit situation in British shipbuilding. The UCS workers cannot win in the sense of achieving “no redundancies” and any deal the unions and/or the stewards are likely to get—like the last one when Benn was Minister — cannot avoid some men being declared redundant. To assume otherwise is to assume that capitalism can cease to run on profits. This is not to say the workers should not put up a struggle. They should, if only because the more militant they are the better deal they are likely to get, as past trade union struggles have shown.

How successful will be the particular tactic they have adopted remains to be seen. But it is not something to be condemned out of hand just because it has not been tried before (if it was really an attempt to expropriate the capitalists rather than a mere trade union tactic that would be a different matter; that has been tried before with disastrous results and we would have no hesitation in condemning it). The Socialist Party of Great Britain has always given its general support to the industrial side of the class struggle, which is what the UCS workers are involved in, while leaving the specific tactics to be adopted in this struggle to the workers immediately involved. If after considering the situation carefully the UCS workers have democratically decided on a peaceful, disciplined “work-in” that is up to them. As we said, we wish them luck. Mr. Coyle may also be interested in knowing that members of the Socialist Party through their trade unions have contributed to the UCS fighting fund.

Mr. Coyle charges us with certain inaccuracies but he has misunderstood us. First, the reference to shipbuilding as a declining industry was to shipbuilding in Britain not the world. Incidentally, by “economic power” we meant the trade union strength of the shipbuilding workers rather than the competitive position of the shipbuilding industry. Second, does Mr. Coyle think that from August 1971 to March 1972 is not “a short while”? Third, we specifically stated that we were not going to get involved in “board room disputes”. Whether or not UCS in its present form is viable comes into this category and readers can judge from Mr. Coyle’s enthusiastic comments on UCS’s labour relations and costs where this can lead.

Finally, Mr. Coyle seems to think that Socialism could be established just in “this country”. We do not; we say Socialism can only exist on a world-scale. Mr. Coyle also thinks that the so-called Right to Work is a basic socialist principle. We do not, as we explain elsewhere in this issue.
Editorial Committee (October 10)