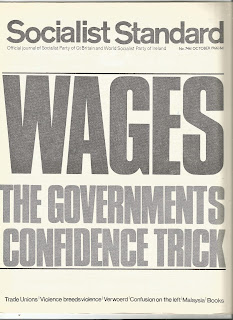 From the October 1966 issue of the Socialist Standard

The basic fact of social life today is the ownership of the materials and instruments of production by a small class. The rest of us depend on this class for a living. To live we have to work for those who own. The places where we work are not ours; nor is what we produce. We are needed by the owners because we can work. The ability to work is, to all intents and purposes, our only asset. We cannot use this ourselves of course since we have no materials or instruments of production. But it is of use to those who do own the places of work. Without it their factories, farms, mines and mills cannot be operated. For selling our ability to work to these people we are paid a price, variously called a wage or salary.

Wages (salary is just a fancy name in keeping with a silly distinction among us) are thus a price—the price of human energy. While potatoes are sold by weight and petrol by volume human energy is sold by time. Houseroom too is sold by time. The buyer pays for the use of some rooms for, say, a week. The buyer of human energy likewise pays for its use for a certain time, perhaps an hour, week, month, year or an even longer period.

We live, then, by selling our energies. Our standard of living depends on the size of our wage packet or salary cheque. It is thus worth finding out what it is that fixes the price of what we sell.

After working, that is using up our energies, we are tired. Before we can work again we must recover. This is a biological process for which we need food, clothing and shelter. The cost of living is the cost of keeping ourselves in efficient working order. It is the sum of the costs of buying the food, clothing and shelter we must have to be in a fit state to work. There is also the cost of keeping a family. A man can only work for so many years. The cost of keeping a family is like the depreciation fund for a machine. With this fund a new machine can be bought when the old one is worn out. So our children replace us when we are worn out.

What we can produce in a week is worth much more than it costs to create our energies for a week. This, of course, is why those who own the instruments of production buy our energies. The difference between what we cost and what we make is the source of their income.

But, are there not greater differences between the wages of workers; some get only £10 a week while others get £50? Why is this? Just as there are various qualities of apples so there are various types of human energy. Some of the many different kinds of human energy are more costly to create and keep than others. So they tend to sell at a higher price. Any cost of training, that is of improving the quality of the human energy, increases the value of that energy.

But, over time, don’t the wages of workers of the same skill vary? This is true. As with other things that are bought and sold the price of human energy varies with supply and demand. These changes take place around the value of the particular type of human energy.

There is, however, one peculiar feature of wages that doesn’t apply to other prices. The demand for human energy depends on the prospect of profits. If the owners don't think they can sell what we produce at a profit they won’t employ us. If, on the other hand, they think the chances of profits are good there will be a strong demand for workers, which will tend to raise wages. But because profits are made out of our unpaid work there is a limit to the level to which wages can rise. If wages rise too high profits are threatened and the demand for workers falls off. This is why the ups and downs of wages coincide with those of the business cycle.

The influences given so far—cost of living, training, the business cycle—might suggest that the general level of wages is fixed by iron laws over which we have no control. These influences are decisive but they are not the only ones at work. We can affect our standard of living in a small way by union, by joining with others to try to raise wages and get better conditions of work.

In fact, the system under which we live forces us to do this. It makes us struggle over the price of our energies. But this struggle is not just a dispute over a price or a contract of sale. It is far more than this. It is part of the struggle which is going on all the time, between those who own and those who work, over the division of wealth. Trade unions, employers’ organisations, collective bargaining, strikes, States of Emergency, wage freezes and the like are expressions of this struggle over how much of the wealth that is and has been produced should go to each class. Trade unions are one of our weapons in this class struggle. Persistent trade union action is necessary to keep a given standard of living and, when the unions are used as such, they have the full support of the Socialist Party of Great Britain.

Just as our unions are weapons we can use in the class struggle so the state machine which the owners now control is one of the weapons they can use. The present wage freeze will show this. The power of the state is being used to counter the pressure of the unions.

Economic union is not our only weapon in the class struggle. The vote could be a far more powerful one. For when we see through the present system we can use the vote to send our delegates to take control of the state. We can then use it in our interests to force the owners to hand over the materials and instruments of production to the democratic control of the whole community.

When once the materials and instruments of production belong in common to and are democratically controlled by everybody, then classes will have been abolished. With this will go also the buying and selling of human energy. All will be socially equal. All will have free access to the things they need to live and enjoy life. The wages system will be replaced by the free co-operative work of everyone to make what people need, as individuals and as a community.