Sting In The Tail: Progress Backwards (1990) 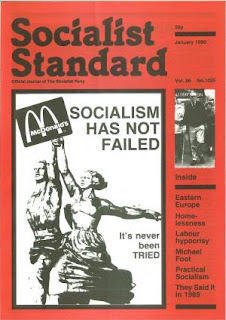 Progress Backwards
Socialists are often told by opponents that capitalism is a wonderful social system. The market economy that they support is lauded as progressive and liberating.

It must come as a shock to these naive supporters of capitalism to read Poverty and the Environment : Reversing the Downward Spiral, a report published by the Washington-based Worldwide Institute using United Nations statistics. Although themselves supporters of capitalism's buying and selling system, their report is a terrible indictment of the system.

The report goes on to inform us that during the last decade more than 200 million more people have joined what they term "the absolute poor" - those who do not earn enough to meet the most basic biological needs for food, clothing and shelter.

These now number 1.2 billion, almost a quarter of humanity. The report forecasts that these recent trends threaten to increase the number of "absolutely poor" to 5 billion within the lifetime of today's children.

Needless to say the Worldwide Institute's "solution" Is a complex package of massive aid and all sorts of legal enactments to ease the problem. The socialist solution is much simpler. Abolish capitalism and introduce Socialism.


Spare a Tear
What torture it must be these days for all those lifelong supporters of "communist" Russia as everything they believed in crumbles before their eyes.

For decades they insisted that Russia was the world's freest democracy, a workers' paradise in which features of western capitalism like strikes and unemployment could never happen and where such evils as racism and nationalism had been eliminated.

Of course the truth in every instance was the very opposite of what these dupes believed and now they watch in horror as the Russian government pursues policies of privatisation, competitive tendering and the setting up of stock markets.

At the recent conference of Britain's Communist Party, delegates were told by one of their leaders that the events in eastern Europe spelled the end of the road for the world communist movement. Good riddance, we say: that movement has been a disaster for the world's workers and its place is in the dustbin of history!


Rogues & Vagabonds
It must be a comfort to us all to know that the police are protecting us from a bunch of "rogues and vagabonds".

According to a recently formed pressure group there were about 3,000 prosecutions in London last year of these miscreants. They were prosecuted under the 1824 Vagrancy Act. According to The Independent (5 December 1989):


The 165 year old law allows beggars and "every person wandering abroad, lodging in an un-occupied building or in the open air" to be prosecuted if he is unable to give a "good account of himself". It deems homeless people to be "rogues and vagabonds".

The pressure group of MPs and lawyers want this 1824 Act repealed. One of their spokesmen Matthias Kelly, a barrister, said "it is not the function of the law in a civilised society to criminalise the homeless".

But Mr. Kelly is not the humane crusader against prosecution of the poor that he seems. For later on in the report we learn:


If tramps were genuinely endangering the public, they should be charged with threatening behaviour, he said. There was no justification for retaining the "archaic" Act.

What a rogue! What a "civilised" society!


Capitalism's Lottery
The winning of political and trade union rights by workers in eastern Europe should be welcomed by workers everywhere.

But as western European capital flows east to take advantage of cheap labour in "the new Korea" then this will affect workers in western Europe.

For example, the jobs and working conditions of car workers in Britain, France, West Germany, Italy etc., will be threatened now that Fiat, one of Europe's industrial giants, is to produce cars in Russia for export to the already glutted markets of western Europe. Volkswagen is considering a similar move in East Germany.

And the TV programme, "1992 and All That" (Channel 4,2 December 1989), predicted that Spain and Portugal, which have been attracting investment from European big business because of their low-cost labour, are likely to lose out to eastern Europe.

So while workers will benefit from their newly-won rights, others may find their livelihoods vanish as capital continues its ceaseless search for bigger profits.


Soup Kitchen Culture
1990 is the year that sees Glasgow becoming "European City of Culture". The City Fathers have arranged a cultural feast for its citizens - Pavarotti singing opera, ballet and drama.

It is all part of the local capitalist class's efforts to project Glasgow as a worthwhile target for investment and a boost to the hotel and tourist trade. Glasgow aims to rid itself of the Red Clyde image, the razor slasher and Ranger and Celtic bar room brawls.

They have made great efforts to tidy up the buildings, floodlight well known landmarks and build a new concert hall. The local populace are proving more difficult to tidy up.


Homeless users of a soup kitchen run by voluntary organisations in George Square, Glasgow, fear they may be moved from their established meeting place because they are an embarrassment to the city as it approaches the Year of Culture.
A soup kitchen regular, known as Pat, said: "They are trying to brush us under the carpet because of the Culture Year. Culture doesn't care about us and we don't care about culture. If they are concerned about our safety they wouldn't chase us down to the Clydeside."
A woman called Betty said:"Tell them to leave us alone. We need this soup kitchen."

Ironically the soup kitchen is located beside a statue of Robert Burns, the Scottish poet who wrote "Man's inhumanity to man makes countless thousands mourn." True enough, Rabbie; and the Labour controlled council's hypocrisy should sadden even the most insensitive Labour Party supporter.

That's all of the January 1990 issue now online.