The Socialist Party and the Labour Party (1907) 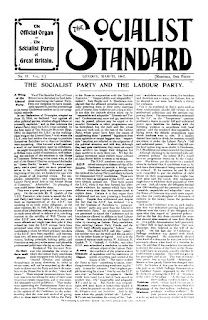 From the March 1907 issue of the Socialist Standard

A Wing of the Liberal Party
We of The Socialist Party of Great Britain have cherished no fond delusions concerning the Labour Party. From our inception we have consistently opposed it, and the proceedings at its recent Conference confirm us in our antagonistic attitude.

In our Declaration of Principles, adopted on June 15, 1904, we declared “war against all other political parties, whether alleged labour or avowedly capitalist,” and in that reference the Labour Party (then the L.R.C.) was included. In the first issue of the Socialist Standard (Sept. 1904) we described the L.R.C. as the working-class wing of the Liberal Party, [It is amusing to note that "Justice" has lately arrived at the same conclusion.] with whom the I.L.P., who had neither the courage to proclaim themselves Socialists nor to disavow Socialism, were coquetting. After two and a half years not a word of our description need be withdrawn.

As might be expected, the President’s address at Belfast was a model of moderation, well reflecting the conduct of the members in the House of Commons. Referring to the artist who, at the end of the General Election cartooned the leader as "Queer Hardie,” he said : "We were a queer party, and a queer party we have proved ourselves to be. Absolutely mistrusted at the beginning of the year, we finished the year with the praise of all impartial critics. For sensibility, adaptability, and respectability, the Labour Party stood first in the British House of Commons.” Admirable! No phrasing of ours could better describe them.

They were a queer party and they are a queer party. On the one side Mr. H. Quelch of the S.D.F. Executive (who wants to smash the Liberal Party) and lesser lights of that body, not there as represeuiatives of the S.D.F., but sneaking in as trade union delegates; at the other extreme, Mr. R. Bell, M.P., who makes no secret of his Liberalism, risking even his position as trade union official in defence of it, a striking contrast to the servility of Will Thorne and other S.D.F. men, who, because they are trade union officials and might lose their jobs if they refused (so runs the S.D.F. excuse) have been permitted time after time to support Liberal candidates, a crime for which ordinary members of the S.D.F. have been expelled; and between these two, all sorts and conditions of men and women, lacking principle, lacking policy, and therefore an easy prey to the astute and plausible professional politicians who lay in wait for them.

As They Darn Well Please
Readers of the Socialist Standard who remember the extent to which the Labour Party candidates made compacts with Liberals at the General Election, and pledged themselves so many directions in order to secure votes, will not be surprised at the effort made to throw over the Party and leave the members in the House free to do as they “darn well please.” Their original recommendation, however, was even too strong for some of their most trusted (or cutest) supporters, and it was amended ultimately carried as follows: "That resolutions instructing the Parliamentary Party as to their action in the House of Commons be taken as the opinion of the Conference on the understanding that the time and method of giving effect to these instructions be left to the Party in the House in conjunction with the National Executive.” “Respectability and adaptability" indeed! Keir Hardie and A. Henderson complained that the affiliated societies were continually pestering them at their party meetings and, of course, they wished to put a stop to this! Is not this the attitude always taken up by “respectable and adaptable” Liberals and Tories? Conferences may come and go, resolutions may be passed, reforms may be urged or demanded, Newcastle or other programmes may be formulated, but the rank and file, whose votes and work and, in the case of the Labour Party, whose pence have been the means of transforming these “pestered” legislators from mere agitators or carpet baggers into “respectable” esquires, are referred to the exigencies of the political situation and told that, although they may pass resolutions, they must not expect their members (no longer their delegates, but their members) to carry them out. We fear the Labour movement must endure many editions of John Burns before it comes to its senses.

S.D.F. Jesuits
The S.D.F. members made a determined attempt on the second day of the Conference to provide a bridge over which that body might again walk into the ranks of the Labour Party and share its funds for disappointed S.D.F. candidates. These men were not there as delegates of the S.D.F., as we have already pointed out. That body joined the L.R.C. when it was first formed, but afterwards withdrew, for reasons which have been different every time they have endeavoured to explain them. Certain it is they regret their withdrawal and are now pursuing a Jesuitical policy. Despite this withdrawal and despite the fact that the S.D.F. has declared “it is not the business of Socialists to ‘permeate’ a ‘labour’ party, any more than the Liberal or Conservative Party," its prominent members are permitted to attend the Conference and its branches are allowed to affiliate to local Labour Parties. Its members are allowed to break its rules by running as Labour Party candidates, thus securing labour Party Funds, and the S.D.F. itself officially supports “Labour” candidates. The official S.D.F. call this “policy," but neither they nor the rank and file can prove it to be either honest or logical.

A Very Ultimate Object
And so in the names of various trade unions, W. Atkinson, H. Quelch, T. N. Cathrall, J. Gribble, and other S.D.F. men submitted a resolution to make the ultimate object of the Labour Party the overthrow of the present system of capitalism and the institution of public ownership and control of the means of life.” The mover wished the Party to have “something to attain, something to strive for, something worth striving for." only it must be "ultimate.” Don’t frighten people by striving for it now. One by one the I.L.P. men rose “as Socialists" to oppose it. Hardie would have voted for it had it been moved in another way, (Oh! respectable and adaptable M.P.). and so on. But Hardie was certainly right, and none knew it better than Quelch & Co., when he pointed out that the people behind the delegates were not Socialists. And by the same token the people behind the “Labour" M.P’s are not Socialists, the victory of the "Labour" candidates was not a victory for Socialism and therefore not a victory for Labour. but, as we showed in our issue last March, a victory for confusion.

Can it be wondered at that a party such as these confusionists should full victims to the professional politicians and the sections supporting them. The recommendation submitted by the E.C. on the “Temperance” question professed a desire to confer full and unfettered power upon localities for dealing with the licensing question in accordance with "local opinion" and then rendered this impossible by laying down the definite propositions upon which localities were to vote. If a locality desired free trade in drink, for instance, it could not obtain it under the Labour Party’s “full and unfettered power.” In short, they fell into the local option trap, as no doubt A. Henderson, D. J. Shackleton and others intended they should.

Although claiming to be concerned with only “practical politics” the Labour M.P’s would have no programme drawn up by the Conference. Shackleton put the matter in a nutshell when he declared that if candidates were to be tied down their chances of being returned would be reduced. If, for instance, he and Mr. Gill were compelled to put the abolition of child labour on their programmes they might lose their seats and the society they represented might have to withdraw their payment of £900 per year. And, of course, the delegates decided that £900 sterling and the presence of two such "sensible, respectable and adaptable” men in the House of Commons was much more important than the yearly slaughter of thousands of children in the factory towns the gentlemen represent!

Voteless Women, Workless Workers
And so the Conference went on, each resolution that was submitted proving how greatly different were the views of the delegates even upon what they regard as “practical politics". And on the last day there occurred the scene that showed what manner of man Keir Hardie is. At a public demonstration held previously at Ulster Hall, he had declared that “they were democrats, they believed in the will of the people.” On the last day of Conference a Suffrage resolution was passed with which Hardie disagreed. He immediately showed what kind of democrat he was, just as he had previously shown what kind of a Socialist he was. He said that if the resolution was intended to restrict the action of the Party in the House, he would have to seriously consider whether he could remain a member. He could not give up his principles, and so on. This was, of course, very pretty but it was hardly "democratic". Moreover, how greatly Hardie has changed since 1893. In October of that year he was asked to part in an Adult Suffrage Demonstration in Trafalgar Square, organised by the S.D.F. He declined, accusing the S.D.F. of "desertion of the cause of Socialism." "Is the case of the three million voteless workers," he asked, "whose hard lot you are so eager to champion, worse than that of the four million, including dependents, workless workers? By your present action you proclaim it to be so, and in this every sweater in the land will agree with you. Whether the best men among your own members will is another question.” But to-day Hardie, having in the meantime become “sensible, respectable and (particularly) adaptable” is quite prepared to put a few thousand propertied women, whose only lack is votes, in front of millions of men, women and children who lack first, last, and always, food.

The attitude of the S.P.G.B. towards the Labour Party remains the same as when our Party was formed. Events have proved that our position is the correct one. We agree with Hardie that you cannot go beyond the position taken up by the people behind you. The people are not yet Socialists. Hardie, Thorne, and the other Labour members did not win their seats on Socialist principles, and therefore cannot fight for those principles in the House. We are opposed to every non-Socialist as well as anti-Socialist party—we are therefore opposed to the Labour Party. Capitalism has nothing to fear from these “sensible, respectable, and adaptable” members of the Labour Party, and the capitalists know it. They are a queer party. A , true party of the workers must be a straight party, not a queer one. It must stand for Socialism at, as well as between the elections. It must endeavour to prevent people who are not Socialists voting for its candidates. Neither the S.D.F., I.L.P., nor Labour Party do this. The workers must therefore reject them. This, the straight, uncompromising policy, is the policy of The Socialist Party of Great Britain. The S.P.G.B. is therefore (he party of the workers.
Jack Kent
Posted by Imposs1904 at 10:19 PM