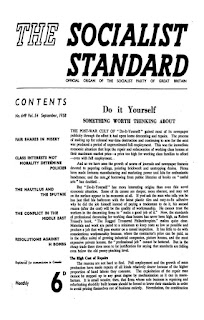 From the September 1958 issue of the Socialist Standard

"Make certain we keep the Socialists out next time—this is what we ask you to do."

Almost every day some new group or sect thrusts itself upon the political scene. “A New Workers’ Party” is born one day; “A League for the Defence of Freedom against the tyranny of Trade Unions” the next. They come—and go. The latest appears to be “The Anti-Socialist Front"; an organisation sponsored by a long list of “homy-handed sons of toil” and well- known champions of the working class, which include the Earl of Mexborough, Lord Moynihan, the Dowager Viscountess Trenchard, Sir Alexander Anderson, General Sir Evelyn Barker, Lady Katherine Beresford-Peirse, Air Vice-Marshal Donald Bennett and many other Sirs, Major-Generals and Colonels.

Being a brand new group they felt that it was their sacred duty to let the “general public,” their fellow-workers, hear the good news. The world must be told “the truth.” Therefore, rumour has it, Major Duncan Keith-Shaw removed his top hat (or was it his deerstalker?) and asked for a few coppers (£1,000 cheques will do!) from each of those present. Well . . .  to cut a long story short, by tremendous sacrifices (such as cutting down on fags and beer) our “Front” members ultimately scraped up a mere £2,650, and invested in a full-page advertisement in the Daily Telegraph of July 15th, 1958.

The crusade had begun.. At last die world had been told the awful truth! “Most of the evils of our time stem from Socialism, either the full-blooded kind of a Socialist administration or the watered down concoction favoured by the present Government.” That’s the stuff. Expose that “red” MacMillan! Purge the “Socialist Revolutionary.” Dr. Charles Hill! These “Socialist infiltrators” in the Conservative Party are ruining the country, losing the Empire and weakening private enterprise, by gad! But worse is to come. For despite “most of the evils” which we are told are caused by this non-existent Socialism that our Anti-Socialist Front imagines exists in Conservative-run capitalist Britain today, we are also warned that “Under a Socialist Government we might well become bankrupt!” Now this complicates matters somewhat, because we are not quite certain what is meant by this rather startling remark. If by a “Socialist Government” our “Front” really means a Labour Government, which we suspect, then it seems very unlikely that “we (meaning our lord- and ladyships) might well become bankrupt.” For, as far as we know, very few concerns became bankrupt under previous Labour Governments. On the other hand during the last two Labour administrations, the number of millionaires increased, which only shows how ignorant our so-called Anti-Socialist Front can get. Still, if the Dowager Viscountess Trenchard, Major-General Sir Basil A. Hill or any other sponsors of the Anti-Socialist Front is a reader of this journal, we can give them some information—quite freely. In a Socialist society they will be bankrupt in the sense that the employing class will no longer exist; that is as an employing, exploiting class. They won’t even have any bank accounts, no banks to go to. For, like the rest of the community, they will —we hope!—work, to the best of their ability, and will get from society not rent, interest or profit, but like everyone else, just what they need. Or is such an idea, such a state of affairs, beyond the ken of these “ Anti-Socialist ” crusaders? To these people, as with many others, workers included, Socialism means government control, nationalisation of industries, bulk buying and the like. And because of this they liken the Labour Party to Socialists. They even call the British Labour Party a Socialist Party—the Socialist Party.

“The Socialist Party,” we are told, “is only the political end of the trade union movement, with its tyrannical and selfish aims.” Tyrannical and selfish aims! Because some trade unionists understand their subject position in our present society, because some workers continue to fight for better conditions and more pay, these Major-Generals and Dowager Viscountesses consider them selfish! Its a pity some trade unionists—and other workers—are not a little more selfish.

What, then, is the solution to the evils of “Socialism” (i.e. Conservative and Labour administration of our capitalist society)? How does the “Front” intend to save us from “Socialist tyranny”? Firstly, it is “to bring home to the general public the disastrous consequence to every man, woman and child in the country of nationalisation or renationalisation”—which, as we have previously said, has nothing to do with Socialism. Secondly, to prevent Conservatives and Liberals (they all worry about the dead-but-it-won’t-lie-down Liberal corpse) from splitting the “Anti-Socialist” (read Labour) vote in marginal constituencies, by adopting the following formula:—

—In Conservative-held marginal seats no Liberal candidate to stand at the next General Election, and Liberals to vote for the Conservatives.

—In Labour-held marginal seats no Conservative candidate to stand and Conservatives to vote for the Liberal.

And the Anti-Socialist Front's third bright idea for solving “most of the evils of our time . . . ” is “to persuade the Government to give an undertaking that it will include the alternative vote in the programme on which it will fight the next General Election.”

These, then, are the “revolutionary” proposals that the Anti-Socialist Front considers is worth £2,650 to advertise in the Daily Telegraph. And for those who may be interested they intend raising an “initial” Propaganda Fund of a mere £100,000. For our part, without the thousands of pounds, we will continue to propagate Socialism (not the spurious invention that the Anti-Socialist Front calls Socialism) as the solution to “most of the evils of our time . . . ” We do not expect any help from retired Colonels, Air Vice-Marshals or Lords and Ladies. Only capitalism can expect such help.
Peter E. Newell
Posted by Imposs1904 at 11:47 PM