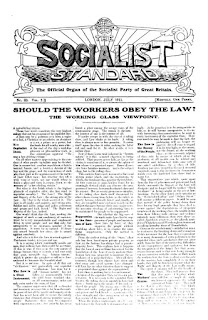 Raymond Tune, of Petone, New Zealand, writes asking us to answer in our correspondence column the following questions:
(1) Is there any foundation in the charge that the position of the S.P.G.B. is too academic and scientific for the average discontented proletarian to grasp, and that some such elementary party like the I.L.P. or S.D.P. is necessary to serve as a sort of primary school from which a proletarian can graduate later on ?
(2) Also is there any foundation in the charge that the S.P.G.B. never obtains members direct from the clutches of the capitalist class, but on the contrary, that they come from the more intelligent and discontented members of other organisations ?

Reply:
The charge against the position of the Socialist Party of Great Britain of being too academic and scientific to be readily grasped by the average member of the working class is usually made by some unfortunate member of the I.L.P. or S.D.P., whose mental outlook upon life has been so confused and maltreated by the teachings of these pseudo-Socialist parties as to have become practically atrophied.

Science is the systemisation (ergo, the simplification) of knowledge. The very fact, therefore (admitted by our would-be detractors), of the scientific nature of our position, should be sufficient in itself to convince our correspondent that the average discontented proletarian can, if he so desires, readily grasp all the essential points necessary for the proper understanding of Socialism.

A careful reading of the Declaration of Principles printed on the back page of the Socialist Standard, will at once clearly and unmistakably show both the strength and the simplicity of the Socialist position. Not one of the principles on which that position stands has been, or can be, refuted.

As to the advisability or possibility of graduating from the I.L.P. or S.D.P. into the Socialist Party (why not also from the Anti-Socialist Union or the Society for the Prevention of Cruelty to Animals?), one might as reasonably expect a student to join the Salvation Army or the Roman Catholic Church in order to graduate eventually therefrom as a professor of biology.

The I.L.P. and the S.D.P. have never taught anything but the pseudo-Socialism of the reformist school. The idea that anyone could possibly obtain the most elementary knowledge of Socialism from either of these parties is manifestly absurd.

With regard to the second question, the Socialist Party obtains members from all sources: some from other political organisations, some from the ranks of those who have never been in any party. Those members who leave other organisations to join the Socialist Party do so for obvious reasons. The members of the working class, leaving school with practically no education (certainly without any education in political or economic thought), have to educate themselves in the only school open to them — that of experience. It thus sometimes happens that the specious promises and high-falutin’ ideals held out to them, lead the uneducated or semi-educated workers into one or other of these particular organisations. But with ripening intelligence and an increased desire to understand their real position in society, they very soon see through the trickery and confusion among which they have strayed. They learn — often from bitter experience — not what Socialism is, but what it is not. If they still desire to become Socialists, and are not so disgusted as to sink into apathy, they seek until they find, at last, a party that is really a Socialist Party - the S.P.G.B.

The schools of reformist thought presided over by Mr. Hyndman and Mr Ramsay MacDonald, may very well be good training-grounds for budding bureaucrats, Labour decoys and prospective  Cabinet Ministers but, except altogether in a negative manner, they are unthinkable as doing anything in the way of making Socialists. As a matter of fact, the confusion and mental decrepitude engendered by the teachings of the I.L.P. and the S.D.P. have done more to retard the progress of Socialism than all the efforts of the orthodox political parties.