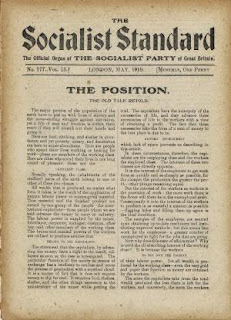 From the May 1919 issue of the Socialist Standard

Six months now have the dogs of war been leashed, yet still their snarling is the most audible sound throughout the world to-day. Orlando has gone back to Italy, and the jingo Press of Allied Europe foams ink at the mouth at Wilson, the Peace with honour—the clean Peace—indeed all those Peaces of which we have heard are still in the balance. For as the war was confined to this unhappy planet alone the dogs of War have only one bone between them.

Yet what is this Peace of which you talk so much? How will it effect the Working Class? ("How absurd the writer is," you are saying, “everyone; knows that Peace is the cessation of War.") Will Peace then resuscitate the dead? Will it restore sight to the blind, limbs to the limbless? Will it strike off the shackles of slavery that bind the proletariat? Will it demolish the sunless slums of Bethnal Green or make it possible for women to obtain bread without selling their bodies? Will it prevent future War? If it will not do these things it is no Peace for me.


Peace to me means the end of wage-slavery. The abolition of private ownership of the means of production and the passing of them into the hands of those who produce. It means the creation of a new and beautiful world by the overthrow of the system of society which makes wars and widows and blind men.


But, perhaps, I am exacting, think you. Maybe I am not satisfied to remain a slave on the promise of a Peace which affects my slave position not at all. You are. Ah, well, perhaps I am only a Socialist after all, and you are—well, what are you, friend ? I have heard you call yourself a Free Citizen. What are you free to do? Can you exist without selling your labour to a master? Have you access to those very tools even with which you manufacture the wealth of the world? What proportion of that wealth do you receive back in exchange for your labour power? Is it enough to satisfy you; does it suffice to clothe, feed, and educate your children, as you would wish them to be clothed, fed, and educated? Or are you not forced to send them out on the labour market at the very earliest moment? And suppose you cannot find a master to employ you, does not your boasted freedom resolve itself into the freedom to starve?

What, then, if Italy does have Fiume? Will you or the Italian worker be any better off? If the German colonies be divided between the Allies, will the German workers be the losers and the Allied workers be the gainers proportionately ? Not a bit of it! The capture of foreign markets as the result of War means nothing more to you and me than the continued exploitation of the working' class. You wear two gold bars and four service chevrons, you have fought, and captured cities, in all theatres of war, but if you cannot find a master to employ you, you must starve. But was not that your position before the war? If, therefore, the division of territory, the readjustment of national boundaries, the “reparations, indemnities, and effectual guarantees" do not alter one iota the slave position of the international proletariat of which you are a member, why in the name of Reason do you worry yourself about them?

In conclusion, if you are interested in Wars, why not take an interest in your own War—the Class War—and join up in the ranks of the Socialist Party, organise with your fellows consciously and politically to overthrow Capitalism with its bloody wars and hollow peaces, and to erect in its place the Socialist Commonwealth.
Stanley H. Steele
Posted by Imposs1904 at 12:01 AM

The original spelling from the article has been retained.