What We Say About The Angry Brigade Trial (1973) 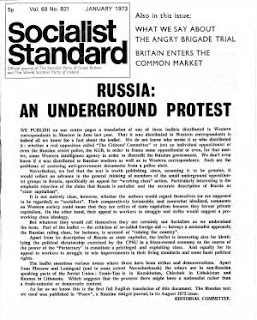 The quarter-million-pound trial ended last month. Four were found guilty of conspiracy and sent to jail, and the Left yelled as always that justice was not done. The sentences were severe ones — what else did they expect? The ruling class believes itself to have been threatened by the Angry Brigade, and has reacted accordingly.

Let the Socialist attitude to this episode be clearly stated. We have not a shred of sympathy for those who believe that bombs and guns are tools to change society. The activities of the Angry Brigade have done nothing but harm to the working class and our movement: by deluding the romantic-minded, by fostering the belief that revolution means conspiracy and violence, by giving governments justification for repressive measures and the diminution of the political and personal freedoms that exist.

Nor are we on the side of “law and order” in this matter. The judiciary, the police and the rest of the apparatus which brought the "Stoke Newington Eight” to trial and convicted four of them are part of the State’s coercive machine which exists to sustain the rule of capitalism. This is what justice is — the will of the established order being seen to be done. Unlike direct-actionists, we are conscious of the State’s rôle. They, apparently, never learn: while the Eight were being disposed-of by it, their supporters continued to argue that the State had no political significance and the power to change society lay elsewhere.

Double-think
The defence in the trial was that the accused were not guilty, and that the explosives had been planted by the police. Only the unsophisticated would refuse to recognize such a possibility; the fact remains that the defendants and their supporters voiced approval of the Angry Brigade while denying the charges. The Stoke Newington Eight Defence Group has published a series of pamphlets and papers, using hands grasping a gun as emblem and reiterating the claim that the bombs and shooting were the work of a wide spontaneous movement. These publications, concerned to vaunt violent direct action as much as to contend that the Eight were “framed”, commend sabotage and arson as well as explosions and bullets. They reproduce Angry Brigade communiques and threatening messages sent to newspapers. The Orwell-word “doublethink” could never find better applications. One Communiqué claiming to have bombed, burned and machine-gunned ends: “Solidarity, Revolution, Love.” The Defence Group’s second pamphlet was called If You Want Peace Prepare For War. Badges are advertized — no-one has been seen wearing one — with the slogan “Armed Love”.

Heard It Before
Is talk like this familiar? It is. Except for the word “revolution” (and that has been debased into the Holy Writ of repression in Russia) these are the words of every nationalist and power-politician. The frantic war preparations of the nineteen-thirties were for peace, the people were told; the hydrogen bombs are for peace; the horrible dying in Vietnam is all for peace and liberty. “Armed love” is the chant of the priests blessing soldier-boys. An Angry Brigade pronouncement says “No revolution was ever won without violence”. The word “won” betrays the whole thing. Their idea of revolution is simply a seizing of power and imposition of another kind of rule. There is no difference between these would-be insurrectionists claiming popular support ("The AB is the man or woman sitting next to you”) and the coup-seekers whose success usually means dictatorship.

It is all the more important to understand this when a campaign of violence justifies itself with “libertarianism” and anti-authoritarian language. Political changes gained by violence have to be sustained by violence or the threat of it. Likewise, conspiracy at the beginning means conspiracy continued to the end. The last Communiqué, published in International Times, says: “We are not in a position to say whether any one person is or isn’t a member of the Brigade. All we say: the Brigade is everywhere.” What this means is that “the Brigade” will decide what they are in a position to let their followers know, and when, and how much. For a modern historical comparison, the Statutes and Conditions of Affiliation of the Third International, to which all the post-1917 Communist Parties belonged, included conspiratorial organization and armed insurrection as “revolutionary methods”. See where they led.

Haste Less Speed
The doctrine of the Angry Brigade is the one found written on a New York lavatory wall in 1969: “Support peace or I’ll kill you.” The comic sound comes only from making the impossible paradox between ends and means plain. If the avowed objective of a society where people can live decently and harmoniously is real, it can only be attained through the conscious, responsible collective action of the people themselves — that is, through majority understanding. “Too slow”, sneer the direct-actionists. Not long ago, a Socialist Party speaker was told by a group of left-wing militants that the people of Vietnam, for example, could not wait so long. Yet the Vietnamese have been waiting, over thirty years, while the demonstrators demonstrated and brawled to no effect; the rest of the world’s working class too. It is the direct-actionists who are sterile and who obstruct progress.

The Socialist case is simple. The innumerable “struggles” in which the Angry Brigade and their supporters regard themselves as principal agents are only aspects of the fundamental division, ignored by them, in capitalism: the irreconcilable conflict between owners and non-owners of the means of living. The oppressions and deprivations and the monumental problems of society all arise from that. The Socialist alternative is a society based on the common ownership of the means of production and distribution — so that no section could impose upon or be set against another, and the economic conflicts in which world problems are rooted would disappear at once.

Responsibility
How can such a society be realized? First and foremost, by the majority of people wanting it, which implies understanding it. The desire for it is then put into effect by sending delegates to Parliament, which despite stupid assertions to the contrary by direct-actionists remains the seat of power in capitalism; and the delegates’ sole mandate is to enact the establishment of common ownership in the place of class ownership. A society characterized by responsibility and understanding can only be brought into being by them, whereas a régime brought into being by violence and minority action must remain dependent on violence and in the hands of the minority.

Of the trial and its outcome, then, we say the lesson stands out for all to see. Attempts at violent direct action against the forces of capitalism mean political and personal squalor and inevitable defeat. The movement to change society must be a political one aiming to take possession of the machinery of government, not confront it blindly; its strength must come from comprehension of the class struggle, and not be dissipated in “struggles” which are grievances against what is irremediable as long as the basic division remains; it must be democratic, not conspiratorial and leader-ridden. Let every person who is “angry” with the capitalist world see that the statement formulated by the founders of the Socialist Party of Great Britain sixty-eight years ago is the only effective course of action against that world. As for the Angry Brigade, there can be no sympathy for them. They have shown themselves as vicious and power-obsessed as those they cursed and threatened. To hell with them!
Robert Barltrop
Posted by Imposs1904 at 9:25 AM

An article that should have been sub-titled, 'Setting the SPGB cat amongst the pigeons." Not sure what I think of it. I guess I need to read Gordon Carr's book to get the other side of the argument. What I will write is that it is a wonderful piece of prose by Barltrop, He really did have a way with words . . . even if you sometimes disagreed with those words.