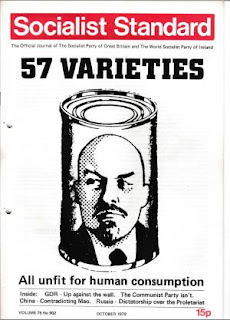 From the October 1979 issue of the Socialist Standard

For the other articles in the series, click on the following links: ONE, THREE, FOUR.

In October 1917 the Bolsheviks staged an insurrection using the Military Revolutionary Committee which had been set up by the soviets after the attempted Kornilov coup. The result was a transfer of power from the hands of the soviets to the small party which followed Lenin. Two of the Bolshevik leaders, Kamenev and Zinoviev, opposed the insurrection on the following grounds:


A majority of workers and a significant part of the army in Russia are for us. But all the rest are in question. We are convinced, for example, that if it now comes to elections for the Constituent Assembly, then the majority of peasants will vote for the SRs.

Their dissent was ignored and, in years to come, used by Stalin to discredit them as counter-revolutionaries. Let there be no confusion about the nature of the Bolshevik seizure of power: it was a conspiratorial coup designed to subjugate what was left of spontaneous mass action to Leninist control. Those who look to the October coup with admiration, as do most of the current Left groups, show an anti-socialist contempt for democracy.

In January 1918 the Constituent Assembly was elected by universal suffrage. The voting figures were as follows:

Votes cast for each party

The Bolsheviks crushed the democratically elected assembly, and Lenin’s argument for doing so was an inevitable consequence of the elitist line taken in What Is To Be Done?:

The petty-bourgeois democrats . . . are suffering from illusions when they imagine that the working people are capable, under capitalism, of acquiring the high degree of class consciousness, firmness of character, perception and wide political outlook that will enable them to decide, merely by voting, or at all events, to decide in advance, without long experience of struggle, that they will follow a particular party . . . Capitalism would not be capitalism if it did not, on the one hand, condemn the masses to a downtrodden, crushed and terrified state of existence, to disunity and ignorance, and if it did not, on the other hand, place in the hands of the bourgeoisie a gigantic apparatus of falsehood and deception to hoodwink the masses of workers and peasants, to stultify their minds and so forth.

Not only was Lenin’s contention — that socialist consciousness by the majority is an impossible dream — an arrogant slander, but it led directly to a system of brutal dictatorship. The fact is that a socialist revolution can only be enacted by a majority of socialists.

The Bolshevik dictatorship over the proletariat was maintained in three ways: rival political organisations were either suppressed or sterilised; widespread political terror was employed; the party and the state became one. The suppression of rival political organisations was probably not the premeditated intention of most Bolsheviks. At the Second Congress of Soviets which was meeting at the time of the Bolshevik seizure of power, the Mensheviks and Right SRs stormed out, leaving only the Bolsheviks and Left SRs. The Mensheviks and Right SRs left because they recognised the coup for the undemocratic conspiracy that it was. The Left SRs stayed, but it is instructive to consider their fate.

In December 1917 they formed a coalition with the Bolsheviks and joined the new government. Then the Bolsheviks stole the SR land policy and the Left SRs were satisfied. By February 1917 Lenin probably made up his mind to break with the Left SRs because of their opposition to some of the activities of the Cheka — the Bolshevik political police. The split between the two parties came in March 1918 over the Treaty of Brest-Litovsk which the Left SRs considered to be defeatist. The Left SRs were a party based upon anti-German patriotism, and in July 1918 some of their members conspired to murder the German ambassador, Von Mirbach. Their punishment for this was the suppression of their press and expulsion from the All-Russian Congress of Soviets. So here was a group which had supported the rule of one party in the hope that they would gain some of the political spoils. Within a year they, like the Mensheviks and Right SRs, had no free press, no free voice in the soviets and even restricted freedom of association. The trade unions and factory committees were similarly sterilised.

The use of terror was the second means of defending Bolshevik hegemony. The Cheka’s use of brutal police methods was legalised by a decree of Sovnarkom (the Council of People’s Commissars) on 5 September 1918:

Sovnarkom, having heard the report of the chairman of the Cheka, finds that under present circumstances it is necessary to safeguard the rear by means of terror. In order to strengthen the work of the Cheka its forces must be increased by reliable party comrades. The Soviet Republic must be safeguarded from its class enemies by isolating them in concentration camps, by shooting all persons associated with White Guard associations, plots and conspiracies, and by publishing the names of all those shot and the reason for the shooting.

The All-Ukranian Trade Union Council tried in vain to protest against the Bolshevik methods of control:

When a government pretending to act in defence of workers makes use of the same methods of political struggle as those employed by reactionaries in their fight . . . against the insurgent masses, then the proletariat must raise its voice and declare openly: ‘The responsibility for terror falls on those who use it’. The working class never has and never will have anything in common with these methods of struggle. We appeal to the organised proletariat to support our protest. (Posledniia Novosti, No.5, 213, 28 September 1918, evening edition.)

The third method of maintaining the dictatorship was by bureaucratisation and centralisation of the party and the state until both were controlled by a small caucus of leaders. The civil war provided a useful justification for this process. By the time of Lenin’s death the state machine was no less powerful and anti-working class than that presided over by Adolf Hitler in Nazi Germany.

The Bolshevik dictatorship has provided one of the most compelling arguments used by the enemies of socialism. The only lesson to be learnt from the Russian Revolution is that a society based upon human freedom cannot be created by a faction which sees the mass of humanity as incapable of self-emancipation.

Steve Coleman
(To be continued.)