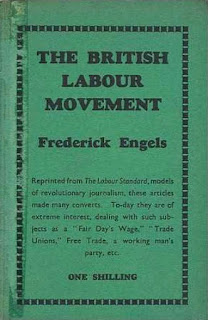 Pamphlet Review from the February 1936 issue of the Socialist Standard

The above booklet contains eleven articles written by Engels and published in the Labour Standard during 1881. This journal was an attempt of the London Trades Council to provide a working-class organ in this country. The people in control of the paper were not, however, Socialists, but tended to support Gladstone, the Liberal. Hence it is not surprising that soon Engels’ contributions to the Labour Standard caused concern to these champions of the working class, and he was requested to tone down his writings. This Engels refused to do. As a result, he ceased to contribute articles to the Labour Standard.

The first four articles deal with the wages system and the trade unions. Engels shows how, under capitalism, there is a class struggle between the working class and capitalist class, between those “people deprived of all property in the means of production, owners of nothing but their own working power ” and “the monopolisers of the whole of the means of production, land, raw materials, machinery” (p. 12).

Engels shows how the trade unions have helped their members to maintain their standard of life in this struggle, but it is pointed out that, despite their fight of sixty years against capital, the trade unions have been unable to raise the working class above the situation of wage slaves (p. 12), and that any advantage gained by the workers through their unions is brought to nothing by the crises which occur periodically. Then, the fight has to be undertaken again. In this never-ending struggle with the capitalist class, the workers are at a disadvantage. First, the army of unemployed help to keep down wages: workers compete for jobs, and this enables the capitalist class to enforce lower wages. Again, if the employer and his workpeople do not agree over wages, and there is a strike, the former have the advantage, for they “can afford to wait, and live on their capital. The workman cannot. He has but wages to live upon, and must therefore take work when, where, and at what terms he can get it.. . . He is fearfully handicapped by hunger ” (p. 10).

In face of this, Engels’ advice to the working class is clear. It cannot hope for an end to its misery and striving under capitalism. It must abolish capitalism and establish Socialism; it must “become the owner of all the means of work—land, raw material, machinery, etc.—and, thereby, owner of the whole of the produce of its own labour.” To do this, the workers must organise politically, because “a struggle between two great classes of society necessarily becomes a political struggle," and they must win political power “to become enabled to change existing laws in conformity with their own interests and requirements."

Of the other articles, “Social Classes—Necessary and Superfluous" calls for special mention. This article contains the reply to those who do not study Socialism, because, as they say, we cannot do without capitalists. Here Engels shows what has been the historical mission of the capitalist class, to develop the means of production to the point they have reached to-day, i.e., so that they are capable of producing goods in abundance. But as the means of production are developed, the capitalist becomes unnecessary—a parasite, drawing profits without doing any kind of work. In the early days of capitalism, he worked with his employees, he supervised their work. Now, the formation of large companies has put an end to this state of affairs. Paid employees run industry from top to bottom. “The capitalist owners of these immense establishments have no other function left with regard to them, but to cash the half-yearly dividend warrants" (p. 44).

Opponents of Fascism would do well to read Engels’ article, “Bismarck and the German Working-men's Party.” Here they will learn that Hitler’s methods were used as far back as 1880. Bismarck outlawed the Working-men’s Party, suppressed its fifty newspapers, seized its funds, broke up its societies and clubs and dissolved its meetings. Workers suspected of carrying on propaganda were kept in prison without trial. In one year (October 6th, 1879, to October, 1880) there were more than eleven thousand political prisoners. Still, these methods did not stamp out the ideas of the movement. We may add that Bismarck failed to keep the workers quiet because he did not abolish capitalism—a system of society which, thanks to its very nature, forces the workers to turn to Socialism as the way out of their poverty. Incidentally, Socialism alone will save the workers’ from the ever-recurring brutalities of capitalism, then called Bismarckism, now Hitlerism
Clifford Allen
Posted by Imposs1904 at 10:57 AM

"Corrected" the spelling of Bismarck in the review.