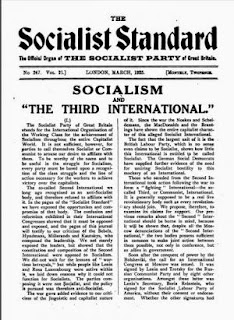 Editorial from the March 1925 issue of the Socialist Standard

The very people who always shout "Be with the masses" and "Form a Mass Party" are now busy pushing forward a body called "The National Minority Movement." The utter stupidity of the title should strike even the doubly-dense Communists who are promoting it.

The aims of the "movement” are in no sense revolutionary. A minimum wage of £4 per week and a 44-hour week is their modest slogan, and if carried out by the capitalists generally would create no real alteration in the system.

With the present cost of living and the growing intensity of labour demanded by employers, these "Minority” aims are just a stabilising of capitalist conditions. Demands like these have been adopted by capitalists who have increased their profits by so doing.

General practice has shown that Minimum Wage Laws and Trade Boards act generally to make the minimum wage the maximum. Our "four pound a week revolutionists" would be compelled to fight against their own aims as carried out by employers, just as miners were compelled to strike against the much-fought-for Eight Hour Law when it was put into action.

Forty-four hours a week is another ridiculous demand for a movement supposed to be militant. Modern highly-developed exploitation can skin the workers quite well at 44 hours, as is shown by employers like Ford and Leverhulme who boast of their rising profits from reduced hours of employees. In fact the exhausting effect of modern industrial methods and machinery is such that the employers are often compelled to shorten hours to avoid having reduced output from tired workers. The miners have long since found this out, and a 44-hour week for them is as reactionary a proposal as a Tory could invent. The miners have made continual protests against the League of Nations' 8-hour statute being adopted.

Another demand is Nationalisation of Mines, Minerals, Banks, Land and Railways without compensation, and with workers' control. With all the lessons of the effects of Government ownership upon the workers, these Communists are still busy with such anti-Socialist proposals. Workers' control without worker ownership is an empty thing in practice. "Those who own control," and unless the workers are in possession of the State power, and therefore the ruling class, their so-called control could never be made effective. When the workers are in possession of the State machine and are revolutionary, the time for nationalisation would be gone, for then common ownership would be in order and possible.

They further demand "An Adequate Housing Scheme” without telling the workers that such a thing is impossible under Capitalism, for even if houses are plentiful, sufficient and regular wages are not. The fact that plenty of rooms were available before the war did not make it any easier for poverty-stricken workers to rent them. The capitalists will give the workers barracks, huts and iron boxes to live in when it suits their purpose.

A curious demand is the "Repudiation of the Dawes Report." Seeing that the party most of these minority men belong to is the Labour Party, it is rather sad that they have to demand the repudiation of the Report adopted by their own Party when in office : A very curious demand to make in view of the action of the leader of the Minority Movement during the General Election. Mr. Cook, the Secretary of the Miners, then came to the support of the Labour Party who were defending their action in carrying out the Dawes Report. Practically all of the Communists in the Minority Movement were then busy supporting the Labour Party which had adopted the infamous Dawes plan they are now demanding the repeal of.

In general, all the items on the “charter” of this Minority Movement are worthless. The fact that they call themselves a Minority Movement damns them from the start, for on the economic field numbers count when a contest is on for obtaining some advance. Not minorities, but majorities, are then required, and a minority movement left to fight for some demand is doomed. The mass of the workers must be united in support of a national advance before we can expect them to obtain it.

The nature of the demands we have shown above to be capitalist in their nature, and they can all be carried out without making any radical change for the better in workers’ conditions.

These demands take no account of the vastly accelerating rate of exploitation in modern industry. They ignore the increasing power of capitalists combined in federations and rings to defeat the efforts of labour on the economic field and their growing financial strength to conquer the puny purses of working men in times of strikes and lock-outs.

The political proposals of this movement could only be carried out if those in control of government passed the demands into law. To appeal therefore to capitalists and their Labour agents to pass certain legislation is to support the present system and those who rule it. It is to ask the workers to prolong capitalism by voting for those politicians who have a programme of properly selected reforms. The Minority schemers thus ignore the class nature of modern society and its resulting class rule in the interests of the class who rule capitalism—the employers.

The Communists largely run this “movement” with its conferences of “delegates” who are supposed to represent large numbers. What is the real nature of the Communists’ efforts in it? Are they arousing the workers to a knowledge of Socialism and spreading an understanding of the social revolution and its necessity? The answer is “No.” The Communists are spreading reform programmes like nationalisation, etc., and advocating support of the reactionary Labour Party. They are carrying out the 21 points and theses of Moscow in getting the jobs in trade unions and similar bodies. In other words they are trying to capture the jobs, but they do not attempt to win the workers’ minds for Socialism. That is too long and too unremunerative a job. It is easier to plank down some demands which are suitable to Capitalist rule and get support for that and become prominent in such an agitation. Then it is easy to get adopted as a Labour candidate.

Displacing a trade-union leader and putting in his place a so-called advanced man is a matter which in itself achieves small results. The lesson of Cramp and Hodges and dozens of other “forward” men should show that. The fundamental thing is to displace the ignorance of the rank and file and then their growing knowledge will express itself in their choice of and control of officers. Otherwise with an ignorant membership the same game of betrayal can be played by the new “leader” they choose as played by the previous one.

The replacing of one official by Robert Williams, the Communist, did not make any difference on “Black Friday” or on the workers’ support of the leaders who smashed the alliance on that classic occasion.

The Socialist policy is one of spreading revolutionary ideas amongst the workers, organised and unorganised, in order that capitalism shall be abolished and Socialism established. That is the work of a mass movement, not a Minority Movement.
Posted by Imposs1904 at 3:53 PM